We have 305 guests and no members online

Compassion, the path to healing, as it is lived by
the Benedictine community of Croixrault,
open to people suffering form handicaps. 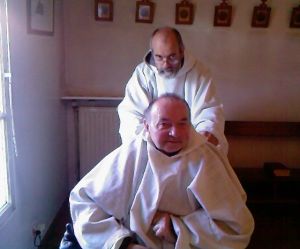 Jesus healed. Jesus is the Saviour. Physical healings have always been the sign of a full salvation, embracing body and soul.

To the Woman with a Haemorrhage, whose loss of blood was cured by touching his clothing, Jesus said, ‘Your faith has saved you’ (Matthew 9.18-26). To the paralytic of Bethesda whom he had cured Jesus makes this astonishing comment, ‘Now that you are well again, sin no more lest something worse happen to you’ (John 5.14). Healing by Jesus does not always lead to faith. Only one of the ten cured lepers was to return and give glory to God – Jesus – and heard Jesus say, ‘Get up and go. Your faith has saved you’ (Luke 17.11).

Are only monks saved ?

All human beings need to be saved. All are wounded by original sin. In this sense baptism brings the grace of healing. Religious profession, its prolongation and actualization for those whom God calls on the interior mountain, also brings a grace of healing. But grace does not destroy nature; rather it elevates it, and it is a real human being, situated in a particular time, place, family, people that lays hold of baptismal grace and subsequently the grace of religious profession. Always a human being in some way wounded.

Some are particularly wounded in body.

For a long time it was thought that good health was a precondition for entering and maintaining religious or monastic life. There were some exceptions, such as Herman Contract (†1054), monk of Reichenau, who needed help for the simplest movements. To him are attributed the Alma Redemptoris Mater and the Salve Regina.

Nevertheless, the Rule of St Benedict has a very beautiful chapter on the sick brothers: ‘Before everything and above all the sick must be cared for and served as if they were truly Christ’ (RB 36). Dom Delatte writes in his Commentary, ‘No other Rule had shown such care with regard to the weak and suffering.’ But their condition obliged them to live to some extent on the margin of the community, housed in separate quarters, which they left only when they had recovered. P. Henri-Marie Guilluy, monk and novice-master of the Abbey of St Paul at Wisques, of the Solesmes Congregation, realised that certain candidates could not enter the abbey or remain there because of lack of sufficiently robust health. In his great love of monastic life he regretted that some people should be deprived of the treasures of grace of this way of life simply because of their handicap, illness or insufficient health. He judged that there was no radical incompatibility between a handicap or an illness and the contemplative life (Livre de Vie, no 1). So he left the Abbey of Wisques and in 1966 with two other brothers he settled at Croixrault in the diocese of Amiens (France) to make the experiment of a life open to persons of diminished health. His foundation took root, and developed till it is now composed of 150 monks and a few sisters, in 12 houses and a priory for women.

By the clear intuition of its founder the Congregation of Our Lady of Hope is monastic. Here also the first question put to a candidate is, ‘Do you truly seek God?’ Or, in the words of P. Guilluy, ‘whether he seeks God and is capable of obedience’. All, handicapped or healthy (alas, too few of the latter), wish to lead a monastic life according to the Rule of St Benedict. The congregation is not a care-home, even though caring holds a particular place for many of the brothers. Their handicaps are very varied, some physical, some psychological. Like all their brothermonks, the brothers of Our Lady of Hope receive in their hearts the invitation of St Benedict that they should ‘very patiently put up with one another’s infirmities, physical or moral’ (RB 72).

For them, as for all, the first stage of healing is that acceptance of themselves, of their illness in the light of God. This can be a long process, passing through plenty of ups and downs. ‘I must accept a lifelong treatment…’, ‘I could not accept this offer because of my illness…’, ‘I depend on others, and I will always become more dependent…’. The fruit of this acceptance can be a grace of serenity, always linked to a human and spiritual combat. If a certain stability is required of sick candidates, from the medical point of view a guarantee of permanence is required. But relapses assumed in faith can lead to stability. ‘On his first day in the guest-house Brother Pachomius slammed the door – literally. He was not prepared to hear talk of treatment. In the end he accepts, enters the monastery and completes his noviciate (of course with a few adjustments). Fairly soon he is asked to help a local prior. With a few worries and blockages, he accepts for good or ill. Then comes a serious relapse into his illness. He comes through it strengthened, and a few years later, having progressed to a better acceptance of himself, as he puts it, having received the grace of healing, he can be appointed to a responsibility in the community.’ 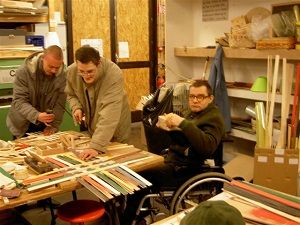 It can, however, happen that once the brother has accepted his handicap more fully, has become stable, he realizes that, although the time passed in the monastery was a healing stage, nevertheless his place is in the world, where he can also respond to the universal vocation to holiness. It must be granted that, even if the Rule, with its regularity of ora et labora, represents one factor in the cure, even by medical opinion, nevertheless, at the end of a few years there comes – as most monks will admit – an aridity or even accedia. Then comes the question, ‘I have my sickness, my handicap. Why should God impose on me the additional constraint of the Rule.’ There will be a choice to make! In order to avoid a life-situation becoming an impasse, we sometimes propose that a brother become an Oblate, and renews the promises each year.

Marthe Robin once said to our founder that at Croixrault the parable of the invited guests, the crippled, the blind and the lame, is fully realized. The door is wide open also to the healthy! Wounded and battered, we are all the poor who say to the Lord, ‘Speak only a word and I shall be healed.’