We have 164 guests and no members online

Symposium of the CIB

Symposium of the CIB

We met on the morning of 7th September in Sant’Anselmo with the full Conference, while the sisters who had already arrived left for a day at Subiaco and then Monte Cassino, a great journey to visit these two important sites on St Benedict’s itinerary. We made a review of the previous four years before beginning work on the aims of the CIB over the next four years, namely:

• Solidarity, in particular within and between the regions

• Authenticity: to live in personal and community fidelity to the Benedictine life as women of the Word, interiorly renewed and facing with passion, joy and hope the challenges of our time.

• Respect: to be committed to justice and peace with a profound respect for one another, recognizing the respect which we owe to the earth and to the dignity of all human beings, especially children.

After the Symposium we proceeded to the renewal of the Administrative Council of the CIB. This Council meets in January each year in addition to the meeting of the Conference in September. We re-elected Sr Judith- Ann, an American Benedictine Sister, as Moderator. Then we elected M. Thérèse-Marie, a Belgian nun, so French-speaking, but managing very well in English; she complements M. Judith-Ann well. Next we elected two sisters, one Indian, M. Mathilda, and one Philippine, M. Mary-John, who had hosted us at Manila. The Council was later to be completed by co-opting. These were the essentials of the work of the Conference of the delegates of the CIB. We also received the Statutes of the CIB, duly corrected. Next we come to the Symposium itself.

THE SYMPOSIUM OF 8TH-15TH SEPTEMBER

An Echo of the Symposium by M. Marie-Caroline, Bouzy-la-Forêt

‘When I sum up everything I heard and saw at the Symposium, the problems of community and even of the Congregation become very small and lose their importance,’ said M. Helen Binder, Superior General of the Benedictine Sisters of the Adoration of Bellemagny, on the final day. This German abbess had been at my table during all these days of listening and sharing, and she summed up in a few words what many of us felt. It was not a matter of minimizing our community concerns, so much as of registering the fact that the field had been enlarged, our viewpoint deepened by contact with these Benedictine sisters from five continents. On getting back home, we met again our joys and difficulties, but everything was seen in a new light, or rather from a new, worldwide, point of view, which makes us live our humble, daily way of life in constant awareness of the memories, the faces, the words which for me remain the echoes of the gospel lived in all parts of the world.
We were all at little tables of six or eight, even during the Conferences, which allowed us to react for a few minutes after a presentation or a short DVD projected onto a large screen. These little groups encour- aged a very convivial climate, and so a much greater mutual knowledge: eight days with the same sisters allows a discovery of one another, a more confident sharing, despite language difficulties. Thus I was able to feel what Benedictine life could be in the monastery of St Paul’s, Minnesota (USA); where fifty sisters pray and work for children in difficulties, as well as contributing to the formation of lay people or supporting the spiritual life of a women’s movement. Or again to realize the difficulties of a small community of apostolic sisters in southern Africa. Even if we were not always able to deepen our exchanges, this at least gave us the desire to go and see a place to glimpse what sort of community was hidden behind this particular friendly Indian or Australian sister.

I loved the fraternal and very relaxed atmosphere created by the American staff. I had experienced a Symposium 12 years ago, and there had been a very positive evolution – free spaces during the day to allow the inclusion of meetings inside and outside Sant’Anselmo, and fruitful sharing, a free day in the middle of the week, giving the possibility of getting to know something other than the Benedictine world…in a city as close-packed as Rome. I would have liked a third Conference on the theme. The round tables were a good idea for an exchange between young sisters and the ‘old hands’, but again there would perhaps have been something to be gained from chances of deeper reflection, instead of merely flashes. Very concretely from our point of view, with the grace of God, two sisters are going to live with us for a year more or less from the beginning of December. This is the very positive fruit of this Symposium, thanks to meetings and exchanges in corridors or at table. To make the monastic and Christian world aware of eastern Christians who feel themselves abandoned and forgotten, and so tempted to emigrate, is a serious duty for us, if we do not wish the chief of our Holy Places to become museums or to disappear, as they have done in the countries which surround us, by lack of Christian presence. I hope that in your turn you will be able to spark off a desire to get to know and to bring to life this reality in the Holy Land.

What have I gained from my experience of this symposium, which brought together more than a hundred Benedictine women from all over the world to Sant’Anselmo on 7th to 14th September, 2010? To begin with, one can only be amazed at putting a finger on the expansion of the Rule of St Benedict over all the continents, and at its capacity to become inculturated everywhere with such extraordinary vitality. It is undeniable that even with difficulties of sharing due to language, even with different habits, even with often opposing cultural sensibilities, a real fraternity exists. Across the three Conferences, the witnesses, the table-sharing, our differences were palpable. In another context it would perhaps have been difficult to hear one another. But our unity in sharing a quest for Benedictine meaning and values was real. This year in our reflections on the subject of hope we weighed up the differences of the situations in which our communities live the life of the Church. At the same time we were able to experience the vitality of the faith, both by the growth of the ‘little flock’ in the countries of Asia, for example, and in the intensity of life in survival situations in other regions. For my part, I really appreciated the Conferences given by Sr Maricarmen of Mexico and Sr Thérèse Marie of Hurtebise. The South American and the European complemented each other wonderfully! The former shared with us her vigorous and vehement experience of ‘going to war’. The latter shared with us her no less vigorous and demanding hope, thoroughly impregnated by a profoundly Benedictine spirituality, evoked by poetry and music. I cannot finish without giving thanks for having had this chance to live at the very centre of the Church such a fine witness to the vitality of Benedict. 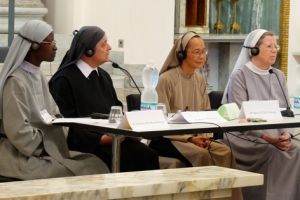 Programme of the Week

Wednesday 8th September:
- Opening Ceremony.
- Video on world events marking the last years, that is the basis on which we reflect our witness of hope
Presentations by small tables.
- Report of the Moderator on the last four years (texts available).
- Meditation on Mary’s hope, with visual support drawn from paintings of the Virgin Mary (texts available).

Thursday 9th September:
- Conference of Sr Maricarmen, ‘The place of hope in Benedictine life’ - listening with the ear of the heart: ways of relating, gifts of leadership, being the leaven of hope, the sources of my own hope (texts printed elsewhere in the Bulletin).
- Reactions in small groups.

Friday 10th September:
- Conference of M. Thérèse-Marie, ‘Hope against all hope’ – living in hope, singing Alleluia in one’s heart during the nights of this world, in the heart of our own night (texts available).
- Reactions in small groups

Saturday 11th September:
- Morning: Round-table discussion with four abbesses of different countries – we listen to their very personal witnesses (texts available on website of CIB France).
- Afternoon: Abbot Notker made a presentation, then the members of the administrative council of the CIB present (Sr Judith-Ann [American], M. Zoe [English], M. Theodora [South African], Sr Clare [Australian]) shared with us what they had received from this service.

Monday 13th September:
- Morning: The younger sisters (20 of them) publicly debate the sources of their hope, and react to what they have heard at the Symposium.
- Afternoon: Sr Gisela of the AIM presents the work of this organisation in the service of the monasteries of the South. Then we watch a splendid video, linked to the theme of the Symposium: ‘The Tree-Planter’, on a text of Jean Giono - a ‘must see’!
- Evening: A very happy meeting at St-Egidio.

Wednesday 15th September:
- Morning occupied by the Papal Audience – each group greeted by the Holy Father, who was giving his catecheses on the lives of saints, this time on St Clare of Assisi.
- Afternoon at Sant’Anselmo to reflect on the theme of the next Symposium.
- Evaluation.
- Closing ceremony.

A fine experience of communion in a real diversity not only of languages and cultures, but also of the expressions of the Benedictine reality.