We have 298 guests and no members online

THE SOCIAL DIMENSION OF FAITH

A Glance at Monastic Origins

We, the Benedictine Missionary Sisters of Tutzing, attempt to live from day to day the essential elements of monastic life, recovering the missionary dimension in the Benedictine tradition, in accordance with a thought which inspired our founder, Fr Andreas Amrhein. Looking over the monastic tradition we find already in St Antony a concern for helping his brothers: from time to time he would emerge from his hermitage to confirm his brothers in faith and to offer them what he had left over from his daily sustenance. This was just the help with Christians gave to Pachomius when he was a prisoner, a help which opened his heart to the Christian faith and made him decide to set out on the path of monastic life, without however neglecting the needs of his brothers. 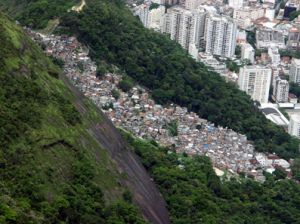 St Basil, putting into practice his ideal of fraternal community, was concerned with granting hospitality to his brothers and helping them in their spiritual and material needs. It is claimed that he was the first to set aside a place specifically for sick people - the origin of the hospitals we have today. It was the experience of urban monasticism that brought him to see the necessity of sharing as a pastor the material needs of his flock. Basing himself on the eastern tradition, St Benedict attempted a synthesis of eastern and western monastic life. In the solitude of Subiaco, he made his own the experience of savouring the scriptures and the teachings of the Church Fathers. This brought him to accept the mandate to announce the gospel to those who did not know it. Thus he evangelized shepherds, cured the sick, and comforted everyone who came to him thirsting for a word of life to cure their afflictions. St Benedict recommends special care of those who come to the monastery gate: ‘As soon as someone knocks or a poor man calls out, the gate-keeper is to answer “Deo Gratias” or “Benedic”, and with all humility and the fear of God he is to reply swiftly and with the fervour of love (RB 66).

With this welcoming attitude Benedict teaches us how important it is to be aware of the needy people who arrive continually at our monasteries and to share with them what we have and what we are, bearing in mind all the implications of Benedict’s time, and those of our contemporary world. Thanks to the tradition of going on pilgrimage, of setting forth, this is how a great part of Europe was evangelized by the Benedictines. Our own founder, Fr Andreas tried to actualize in the nineteenth century this early fervour of our tradition. Thus in 1884 that he founded a masculine branch of the missionary Benedictines, and in 1885 the feminine branch of the Benedictine missionary sisters, whose 125 anniversary of their foundation is being celebrated this year.

Putting our experience into Practice

Putting our Benedictine missionary charism into practice has been a priority for our sisters from the very beginning of our mission, the concern to live the monastic charism of personal prayer, communal life and liturgy, as a support for missionary work, which in turn has always been a fundamental element for us. It is in the community that our sisters have come to live out their charism of evangelization and social work. In all the communities, scattered throughout Europe, Asia, Africa and America, the social dimension of faith has always been accentuated, that is to say, evangelization on the basis of concrete reality, based on an integral vision of the human person. 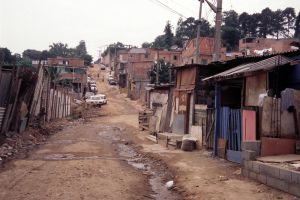 Here in Brazil, particularly in the north-east, characterized as it is by marked social inequality, climatic difficulties and shortage of governmental funding, it became an evangelical necessity to unite evangelization with social work. For this reason social centres were created in order to work for the advancement of the human dignity of children, adolescents and adults.

In Caruaru we have the S. José do Monte social centre, where children and young people in difficult situations are welcomed, orientated, and offered professional courses which can guarantee them a source of income and enable them to get off the streets. Equally in Casa Caida in Olinda there is a social centre where children attend a crèche, receive food and begin their formal education. Mothers in need take part in professional courses, making use of recyclable material to generate income for their families. In its turn the third age has its own space given to it, in the sense of receiving geriatric orientation, which enables them to gain opportunities for a better quality of life.

In the south of Bahia, together with the work of evangelization in 36 rural communities, we work on a programme of combating drought in the semi-arid north-east. The specific task of the sisters consists in mobilizing communities so that, organized together, they can construct systems to capture rainwater, and so minimize the effects of the long dry summers. It is a work done in common, accompanied and stimulated, to improve living standards. The government and international organizations, such as Taufkirchen, finance the programme, while those for whom it is destined engage in the manual work, thus promoting a culture of solidarity. 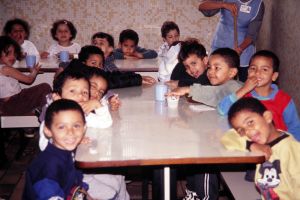 In Olinda in the Campo du V8 Favela also we encounter a great challenge of evangelizing and improving human living standards, the challenge of proclaiming the gospel where the conditions of life are minimal. In this we rely upon a great ally, Dom Helder Camara.

In its beginnings, the favela was a great rubbish pit, with disastrous consequences for the people living there. One day Dom Helder, heeding the cries of the poor, pronounced firmly, ‘From today onwards, every rubbish cart dispatched here will be my responsibility.’ From then on his voice was heard, and the rubbish was diverted to another location. The struggle continued. In collaboration with the evangelical Christians we are trying to mobilize people for the communal construction of houses. Right at the beginning forty-five houses were communally built by the women of the community, who gathered together in groups of fifteen and built one house after another. The residents’ association then called on the public authorities to grant the community a better quality of life.

The work of evangelization and human improvement in this favela has become an important element in the formation of our sisters in the course of their formation. They go daily to the community in order to give classes in the community school, which was set up there also at Dom Helder’s suggestion. Despite the many challenges caused by drug trafficking, alcoholism and unemployment, we already perceive an improvement of conditions of life of the 3,000 people who live in this community.

As a result of the programme for urbanizing the favelas there is already basic sanitation, a cleansing of the canal which cuts through the favela, together with the construction of houses in stone, so that people can move their dwellings from the edges of the canal. 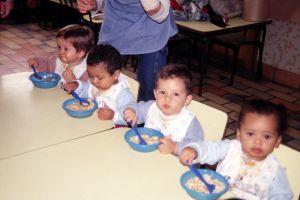 In the last two years an organization for children has been set up. It attempts to organize people and identify heads of families who need help for pregnant women and children under six years old. The heads of families who offer themselves voluntarily for work do this with the support of faith, with the aim of saving lives through basic work on health, nutrition, education and citizenship, normally holding meetings to discuss the problems experienced in the community and to work out possible solutions. Our sisters in formation are engaged in this work, and they do it at the same time as evangelizing groups of women, children and adolescents. Our missionary charism is richly expressed through social action which leads us to respond to the cry of the poorest. This makes it possible for us to respond to Jesus’ teaching, ‘Whatever you do to the least of my brothers and sisters, you do to me’ (Matthew 25.40).

This social dimension of faith brings us closer to the roots from which the force of our action springs, in an attempt to live in today’s world the motto which inspired our founder, Fr Andreas Amrhein, when he said, ‘Charity should be the characteristic virtue of the messengers of faith’.