We have 268 guests and no members online

In 1930 Benedictine Sisters from St. Joseph, MN, United States, sent 6 Sisters to China to help Benedictine Monks teach in Fu-Jen Catholic University, Beijing, China. After some time they transferred to Kai-feng, He-nan Province where they planned to start a Novitiate as their foundation in China. 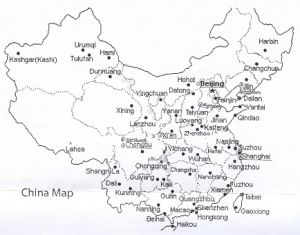 With the 1947 Chinese revolution war, Sisters had to leave Mainland China and moved to Taiwan. In 1962 we began our own Novitiate with three Novices now located in Taipei County, Dan shui town, on the top of a foothill of a mountain. It was chosen as a traditional place for a Benedictine Monastery with a very good view to the sea and Taiwan Straits. Now the town is growing up around us with many high buildings. Besides after these many years trees have grown taller and taller. But we still have a very good, quiet place, with many natural plants and fresh air.

In 1975 we became Dependent Priory. Sister Bernard Marie Liang was our first elected Regional Superior. She also is our first Chinese vocation from Beijing to the States. In 1988 we became Independent Monastery.

In our early days, the Sisters taught in Taiwan National University, and taught Catholic doctrine to interested persons at the convent.  After we had more Chinese Sisters, we helped the perish church on Sundays and also worked with Catholic students in high schools and universities. We have a Student Activity Center for the student to come for weekends and holidays.  We also had a Home for Children, from 1961-1973, to help poor families raise their children (from birth to 3 years old). If they give up their child, we would help them to find a family for adoption. Since 1963 until now we also have a Girls’ Hostel in Taipei City for the University students, especially those who are from outside Taipei city.

Because Taiwan’s economic situation improved, most families can now take care their own children, so we closed the Home for Children. In 1976, we started a Retreat Center, where we conduct some programs and offer the place for group meetings and retreats, used mostly by Catholic and other Christian groups.

In the beginning, as a non-Christian country, we had pretty many vocations -- about 3-4 every year. Because of the overall shift in the Church and all of the society, it made a lot difference regarding vocations. Since 1976, we became Dependent monastery. The American Sisters gradually went back to the States, with only two elderly Sisters remaining with us. They were Sister Ronayne and Sister Mariette. Sister Ronayne is one of the first group of Sisters, being in China more than half century. She died in 1991.

In 1988, when we became an Independent monastery, we started with 14 members.  Now we are 10. The elderly Sisters went to heaven and some young ones left the community while some new vocations came. Because of this, we shifted our work, to giving retreats and consulting, which we do in our Retreat Center. We have a garden for some vegetables and fruits. We use our own fruit to make jam and vinegar for sale. This along with retreat work and our Hostel is part of our income.

In 2003, we started an Oblate program as a means to continue to spread our spirituality, to outside people. The Oblates are zealous and eager to spread Benedictinism. They also help us with our apostolic works, such as Taipei Hostel and Retreat Center.

In the beginning, we lived the life style copied from our Motherhouse in the United States. After we became a Dependent Priory, we started to think about how we can best live our Benedictine life in a way that fits our Chinese culture. We started to study our own culture, especially Confucius thoughts. With the help of a Jesuit priest we spent some extended time  studying the similarities between Confucius’ Four Books and our Christian Scriptures and how they support each other. We gradually felt called to a life style with a more contemplative    expression and are learning how to live it while helping society as best we can.

The Benedictine way of life, besides emphasizing liturgy, emphasizes hospitality and community life. Those three Benedictine characteristics fit right into our culture. Today, many young people do not want to live with their parents, they like to be independent. But most Chinese still claim a traditional way of life, to live with the family. Hospitality is a very large part of most Chinese families.  It is a delight and joyful to have some friends come and visit.

As our pastoral work, we try to bring our Benedictine way of life to those with whom we have contact. For example, our hostel girls learn how to live in a group in peace and harmony and learn to take care of each other as a family. We always try to help the persons we deal with to meet God in their life. For example, in our retreat work besides offering kind hospitality we introduce them to our prayer and lectio. We are a non-Christian country, but most people we encounter are respectful and interested of our faith.

Our future plans are that we hope to reestablish Benedictinism in Mainland China. We pray that the policies of China for Religious will gradually loosen which would allow religious communities to rebuild their communities on the Mainland. We are preparing for this by deepening our own monastic life, strengthening our community life, listening carefully to the Holy Spirit and praying that someday we can be free to return there. This is a focus of ours as we prepare for our work on the China Mainland and continue ministries here in Taiwan.