We have 304 guests and no members online

‘I shall go into your holy Temple to adore and sing or your Name.’ 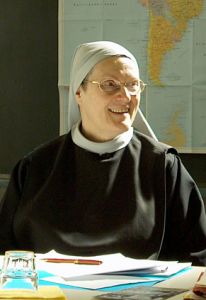 Sister Véronique Dupont, OSB, of the Abbey of Venières in France, was a whole-hearted collaborator of the AIM for nearly 20 years. In 1992 Père de Soos, OSB, secretary-general of the AIM, turned to the Assembly of the Abbesses and Prioresses of France to find a competent nun, capable of organising conferences on the Fathers of the Church and on the Monastic Fathers. The Mother Abbess of Venières offered Sr Véronique, who was a student of P. Hamman and already involved in correspondence courses and sessions of the Association Migne.

She was born on 22nd August, 1945, and received a formation in the natural sciences, taking part in research in molecular biology at the Institut Pasteur as a member of the CNRS. After entering the Abbey of Venières of the Subiaco Congregation she made her solemn profession on 25th March, 1981, and studied theology at the Institut Catholique of Paris, writing a dissertation on Maximus the Confessor.

To share with others what she had received she gave courses on patristics. Service of the monasteries was to take an ever more important part in her life. As soon as she joined the AIM she spent her energies in various monastic communities of West Africa, for which she led teaching sessions. She followed these up, and was responsible for serious work on the first Christian centuries. Her main care was to ensure that the communities undertook their own formation. Thus it was that in 1999 she was one of the leaders who set about forming tutors for the monasteries of West Africa and Madagascar. An important element in this formation was to maintain a lively unity between holy scripture, the liturgy, monasticism and patristic theology.

This was the beginning of a new methodology which was to be taught and put into practice by those responsible for formation in each community. She called it the ‘St Anne method’. She worked with a support team composed of Mother Lazare of Seilhac, the late Abbot of Dzoghégan, P. Robert Mawulawoe, Abbot André Ouedrago of Koubri and P. Jean-Luc Molinier of En-Calcat. In parallel with this major project the collection ‘Tradition, source of life’ was close to her heart. It was published in basic French and taken up again in the collection ‘Témoins du Christ’, thanks to the Editions de Bellefontaine, edited by SODECAIM. In her personal research she had discovered new Syriac texts which she compared enthusiastically with the Benedictine Rule.

She wrote many reviews for the Bulletin of the AIM under the rubric ‘Communiquer’, and from 1997 onwards was an active member of the international team. She expressed her opinions forcefully and did not hide her concerns. She was always there to help and support new initiatives like the AIM website, where her support was invaluable.

In these last years she visited and gave courses in the Holy Land and in the Philippines. In September 2010 she was due to preach the retreat of the Benedictine sisters of Rixensart in Belgium.

She devoted all her strength to the work, always forward-looking and glad to be of service and be involved. She had no illusions about her state of health, preparing her Passover to the Father with strength and confidence, taking to heart this saying, ‘Yes, I shall go into your holy Temple to adore and sing of your Name’. She entered into the fullness of the Father on 3rd August. She was in the 65th year of her Baptism and the 30th of her monastic profession. May she remain alive in our hearts and prayers, and from heaven may she intercede for us and the communities she knew.