We have 201 guests and no members online

My name is Sister Haregeweine, and I come from Ethiopia. 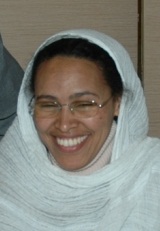 First of all I would like to say a few words about my country.

Ethiopia is a country rich in both geographical and cultural diversity with high plateaux from two to four thousand metres, the fortress of Christianity running from Eritrea to the Province of Shewa in the southern central part of the country. Islam is concentrated more in the plains. The Falashas (Bene Israel) are to be found in small groups in the Province of Gondar, though most of them left for Israel in the 1990s. The population is over 80 million, of whom more than half are Christian, 50% Orthodox, 5% Protestant, 1% Catholic, together with 41% Muslims.

Christianity arrived already in the first century, and in the fourth century Ethiopia became a Christian nation. So the Church was present in Ethiopia before the separation of the Oriental Churches in the fifth century. Since then the Church has become the Ethiopian Coptic Church, attached to Alexandria. Only in the sixteenth century did the Portuguese military forces against the Muslim Turks occasion the arrival of Catholic missionaries, notably the Jesuits. The first missionaries made great efforts at adaptation and succeeded in achieving a rapprochement to the extent that in 1626 the Emperor proclaimed his faith as a Catholic in union with the Bishop of Rome Unfortunately conflicts arose for several reasons, and a civil war forced the king to re-establish Orthodoxy, expel the Jesuits and forbid the practice of Catholicism.

Two centuries later, in 1839, the Lazarist missionary Justin de Jacobis, followed by the Capuchins (notably Cardinal Guglielmo Massala) again began Catholic missionary activity and succeeded in forming a small community. In 1889 Italy took control of the coast of Eretria. Menelik II became Emperor and.favoured the opening of the country to the west. This made missionary activity possible throughout the country. A Catholic ecclesiastical structure was put in place in 1961, with an Archbishop of the Ethiopian rite at Addis Adaba. There are more than 45 religious organisations of which only one is monastic, the Cistercians, together with the recent arrival of the Poor Clares. There are roughly 800,000 Catholics. Despite this minority situation of the Catholics, there are vocations. The population is young; more than 55% are less than 20 years old.

Now let me present myself.

For the last 18 years I have been a member of the Confraternity of Little Sisters of Jesus. However, for some years I have felt a call to the monastic life, which grows ever stronger in me. In Ethiopia the Poor Clares are the only monastic congregation. I have needed time for discernment and a choice according to the will of God. Of course there are Catholic monasteries all over the world, and, closer to home, in neighbouring countries such as Kenya. I nevertheless wanted to fulfil such a vocation in my own land, in company with other Ethiopians who find themselves in a similar situation.

Despite the difficulties, I trust in the Lord, who alone is the source of the grace I need for a vocation to the monastic life. I am convinced that Christ himself is the founder, and I and those with me are no more than followers, building on and inspired by the life of so many monks and nuns, especially St Pachomius, St Basil and St Benedict.

I have, I may say, already made a small step with the help of the Confraternity of the Little Sisters of Jesus and the community of Bose, where I spent a year to have time for discernment and the experience of monastic life. More, my spiritual directors have advised me to gain a solid foundation. That is why I am in France, to study theology at the Institut Catholique of Paris. After these studies I shall return to my own country to continue monastic life in Ethiopia. I have always been encouraged by the Archbishop of Addis Adaba, Abeba Abuna Berhane Yesus, and other bishops, friends in religion and also laypeople in Ethiopia. Thanks to the AIM and to the Benedictine monastery of Vanves I pursue my monastic formation while remaining in this fine monastery of Vanves. Many people have asked me why the formation (studies) in France? Among the reasons, the main one is this: I come from an oriental tradition, and France is a country which is open to these Churches. More than this, the study of theology in France is thorough, paying full attention to ecumenical questions.

To return to the presence of monastic life in Ethiopia, the Cistercians are present, as I have already said. The first Cistercians, having received their formation in Italy, founded a monastery in Eritrea in 1940 and later, in 1956, in Ethiopia. At the present time there are four Cistercian monasteries in different regions. In view of the needs of the country, the monks, in addition to their life of prayer, engage in pastoral activity, both spiritual and material. In each monastery there are Kindergarten, and primary and secondary schools which enable children and young people around the monastery to receive an education. In two monasteries they welcome and form young men interested in monastic life. After the rather unexpected separation of Eritrea in 1993 these monasteries are setting about supporting themselves, for the majority of Ethiopian members are still young. There are about twenty in the region, of whom fifteen are still in formation.

The position of the Cistercian monks in the Catholic Church in Ethiopia is important, since they give a witness to monastic life not only to Catholics but also to Orthodox, for whom monastic life is precious. In all their monasteries the Cistercians follow the Ethiopian rite. They also play an important ecumenical role. While the Catholic monks give such a witness, it is on the female side that this is lacking. As I mentioned at the start, the absence of Catholic nuns in Ethiopia deserves particular attention, and we count on your prayers and your help to facilitate the emergence of a Catholic monachism in the tradition of St Benedict.