We have 120 guests and no members online

Held at Bose, Wednesday 9th to Saturday 12th September 2009,
in collaboration with the Orthodox Churches

Report received from P. Adalberto Mainardi of the community of Bose, Italy

‘There is a precise place where the spiritual combat occurs. This place is the central human organ, which the Bible calls the “heart” (lev, kardia).’ With these words the Prior of Bose, Enzo Bianchi, outlined in his opening conference the interior space and time which characterize biblical anthropology. ‘The spiritual combat in the Orthodox tradition’ was the theme of the 27th session of the International Ecumenical meeting of Orthodox spirituality held at the monastery of Bose from 9th to 12th September, 2009, in collaboration with the Orthodox Churches.

The opening conference of Prior Enzo Bianchi and the conference of Metropolitan Philaretes of Minsk, Patriarchal Exarch of Bielorussia and president of the theological commission of the Patriarchate of Moscow, showed a deep convergence between the biblical approach and the Orthodox understanding of the ‘spiritual combat’. The hymn contained in the Letter of Paul to the Philippians in particular put forward the theological foundation of the interior struggle which the Christian wages against everything which alienates a person from their own humanity and separates from God. The Christian is indeed called to re-live the struggle which Christ himself waged against evil and death by bringing the light of the resurrection to bear on the murky depths which human nature has known in history and knows today. ‘Being in the form of God, he did not count equality with God something to be grasped, but he emptied himself … even to accepting death, death on a cross. And for this God raised him high and gave him the name which is above all other names so that…every tongue should acknowledge Jesus Christ as Lord, to the glory of God the Father (Philippians 2.6-11).

The four days of the Colloquium explored the multiple understandings of the spiritual struggle in the Fathers of the Church (John Climacus, Maximus the Confessor, Barsanuph of Gaza) and in the different Orthodox traditions (Russian and Greek, Serbian and Bulgarian), in the course of their thousand-year history, but also in the difficult situations of the contemporary world, characterized by individualism, indifference towards others, a surprising internal fragility of post-modern man. This was the direction taken by the final conferences of Metropolitan George of Mount Lebanon (on ‘The struggle for the unity of the Church’) and Metropolitan Kallistos of Diokleia, delegate of the Patriarch of Constantinople Bartholemew I, who plumbed the depths of this theme of the ascetical tradition so fundamental for the contemporary world. 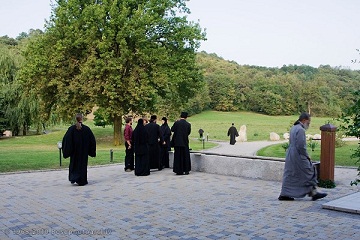 Above all, the Colloquium was the occasion of meetings and fraternal exchanges between Christians of different confessions, listening to the great tradition of the Eastern Church on the theme of discernment and of the struggle against evil thoughts, a real testing-ground for the interior liberty to which all Christians are called. The important ecumenical content of the meeting was expressed above all in the words of encouragement received from Pope Benedict XVI through the Vatican Secretary of State, Cardinal Tarcisio Bertone and Cardinal Leonard Sandri, Prefect of the Congregation for the Oriental Churches, and from the President of the Pontifical Council for the Promotion of Unity of Christians. In addition, messages were received from the Patriarch of Moscow Cyril I, the Patriarch of Antioch Ignatius IV, the Orthodox Patriarch of Roumania Daniel I, Jerome Archbishop of Athens, the Catholikos of All Armenia Kareikinos II, the Primate of the Church of England, the Archbishop of Canterbury, Rowan Williams, the Metropolitan of Malta and Italy Gennadios, the Metropolitan of Kiev and All Ukraine Volodymyr, and the Reverend Samuel Kobis, Secretary General of the Ecumenical Council of the Churches of Geneva.

On the side of the Catholic Church the following took part in the work of the Colloquium, Bishop Brian Farrell, Secretary of the Pontifical Council for the Promotion of Unity of Christians, Father Milan Zust of the same Dicastery, Cardinal Roger Etchegaray, Vice-Dean of the College of Cardinals, Archbishop Antonio Mennini, the Apostolic Nuncio, representative of the Holy See to the Russian Federation, Mgr Gabriele Mana, Bishop of Biella and the local ordinary, Mgr Arrigo Miglio, Bishop of Ivrea and Secretary of the Episcopal Conference of Piedmont.

The Patriarchate of Moscow was represented by Bishop Ambroise de Gateina, Rector of the Theological Academy of Saint Petersburg, who led the official delegation, Father Dimitri Ageev and Dr Alexis Dikarev of the Department for External Affairs. Also took part in the work of the Colloquium Archbishop Zosimus of Elista and Kalmukja and Father Pavel Velikanov of the Theological Academy of Moscow. The Orthodox Church of Greece was represented by Father Savvas, delegate of the Holy Synod, and the Archimandrite Iakovos (Bizaourtis), Higoumen of the monastery of Petraki.

The presence of many monks and nuns from Orthodox monasteries (Greece, Russia, Serbia, Bulgaria, Roumania, Mount Sinai, Georgia, Armenia), Catholics and Protestant (Belgium, France, Italy, Switzerland, Hungary) also witnessed to the desire of the Ecumenical Colloquia on Orthodox Spriituality to offer a space for fraternal exchange between the different Christian Churches and to constitute a place of communion and sharing their varied spiritual traditions. This was underlined by Father Michel Van Parys in his conclusion, delivered in the name of the Scientific Committee:
“‘It is more blessed to receive than to give.’ Have we thoroughly understood this saying of Jesus? Exchanges have continued in the course of the history of the Church, even after divisions and anathemas. The Latin Church owes so much to the Greek, Syriac and Coptic traditions. It is abundantly clear that the Holy Spirit takes no notice of confessional barriers. How else could one explain that Isaac, the ‘Nestorian’ bishop of Nineveh, was and is received by our Churches as a saintly teacher of the spiritual life? His works are to be found in the hands of monks of the holy mountain of Athos, monks of Optina, monks of Sihastria, Coptic monks of Scete, Ethiopian monks. We accept the ‘saints’ whom the Spirit raises up in the divided Churches, we translate them, we open our arms to them. We can put our confidence in the work of the holy Spirit. We have lived together here for this week at Bose. There has indeed been an exchange of gifts. The dialogue of love precedes and accompanies the theological dialogue of truth. Spiritual combat will be ours till our final breath. So warned the great St Anthony. With Saint John Colobos, another spiritual giant of the desert, let us learn that the spiritual combat is necessary for us, for it reminds us of our wretched state as sinners: ‘Lord, give me perseverance (hypomone) in the combat’ (John Colobos, 13)”.

After having expressed his warm gratitude at the conclusion of the Colloquium, the Prior of Bose announced that the 28th session of the International Ecumenical Colloquium on Orthodox Spirituality, dedicated to the theme ‘Communion and Solitude’, would be held at Bose on 8-11 September, 2010. This would be an invitation to discover once more communion and solitude as dimensions of the spiritual life which enter into every authentic search for meaning.