We have 196 guests and no members online

• St Benedict at Butembo, Beni, Democratic Republic of Congo
At Butembo, Beni, Democratic Republic of Congo, the monastery of the Holy Face of Our Lord Jesus Christ at Giulianova, Italy, founded the monastery of St Benedict on 21st October, 2006. It was blessed on 21st March, 2007, by the diocesan bishop Melchisedek Sikuli, Pakulu.
The community consists of two monk priests, three simply professed and four novices. The monks of Giulianova make periodical visits to support them by their presence and help them in formation.


• In the Diocese of Hamilton, New Zealand
The nuns of the Tyburn Congregation, who had already founded the monastery of Tyburn in Bombay, South Auckland, New Zealand, received in April 2008 an invitation from the bishop of the diocese of Hamilton for a new foundation. That is how on 24th September, 2008, feast of Our Lady of Mercy, they acquired a property 25 minutes south of Rotorua, whose address is 74, Dods Road, Ohakuri. In mid-March 2009 they took possession of the property and began to prepare the installation of their new foundation.


• Saint Mary of the Angels, Redhill, Tigoni, Kenya
The Abbey of St John the Baptist at Monte Mario, Rome, undertook on 7th October, 2009, feast of Our Lady of the Rosary, a new monastic experiment at Redhill, Tigoni, Kenya, which with the help of God is to become the future monastery of Saint Mary of the Angels. For the moment one nun and two candidates are living in the minor seminary of Ruaraka while waiting for the basic buildings – such as the monastery – to become ready for habitation.


• Monasterio de la Epifanía del Señor, in the Archdiocese of Havana, Cuba
Perhaps the most eagerly and long awaited of all foundations in Latin America will be that of the Monasterio de la Epifanía del Señor in the Archdiocese of Havana, Cuba. The invitation was made by D. Jaime Lucas Ortega y Alamino, Cardinal Bishop of Havana, on the basis of a permission given at the time of the visit of His Holiness John Paul II to Cuba in 1998. It was accepted by Archabbot Jeremias Schröder, as a foundation of several monasteries of the Congregation of St-Ottilien. Provisionally the community is living in a former monastery of the Carmelites, located in the Velado quarter. The future monastery will be set up near Jaruco, 35km east of Havana. Thanks to a benefactress, the community will provide for itself and will offer hospitality and retreats, and will be engaged in pastoral work. The first monk arrived at Havana on 17th December, 2008, and in September 2009 the starting community, composed of six monks from Togo, Germany and the Philippines had already gathered at the following provisional address:
Monasterio de la Epifanía del Señor
Monjes Benedictinos
Iglesia del Carmelo
Calle Linea 1114 Esq.con 16 Velado
Ciudad de la Habana 10400 Cuba
Tel. +53 7 833 4 789
Email: This email address is being protected from spambots. You need JavaScript enabled to view it..

Three more Trappist foundations have been set up during this period.

• Monastery of Beata Maria Fons Pacis in Aleppo, Syria
In March 2005 a little group of sisters of the monastery of Valserena, Italy, was established in Aleppo, Syria, with the purpose of inserting themselves in the country and giving their lives to a new Trappist community. Their starting-point was the desire to harvest the heritage of the seven Trappist monks of Tibhirine assassinated in Algeria in 1996, the heritage which is stronger than death, the witness of their life, totally dedicated to God and offered with love to all the brothers around them, whether Christian or Muslim. From Aleppo, that ancient point of reference for Christianity, the sisters have realised how important it is to support the presence of Arab Christians in the Near East. In order to fulfil the project of the foundation of the monastery of Beata Maria Fons Pacis in that area, with the blessing of the Latin Vicar Apostolic and the Maronite Bishop of Tartus, and thanks to the help of many friends, the nuns were able to buy a plot of land in the little Maronite town of Azeir, near the Lebanese frontier. In March 2008, after the parish Mass and accompanied in procession by the local population, they raised the cross of foundation at the highest point of their land.


• Munkeby Mariakloster, Norway
From the very secularized and socially advanced country of Norway the news reaches us of the foundation of Munkeby Mariakloster. On 14th September, 2009, four monks of the Abbey of Citeaux, France, established themselves at Munkeby (‘place of monks’), to make the first foundation from Citeaux since the fifteenth century. The place is located close to the fjord of Trondheim, 120km from the city of the same name, one hour from Tautra (a foundation of Trappistine sisters), just below the Arctic circle on parallel 66. It is near a former Cistercian monastery of the twelfth century – Munkeby, ‘place of monks’ – whose ruins are visible to this day. The plan of the monks, who are living in a first house already built on the site, and which will later become the guesthouse, when a monastery of modest size has been built, is to live a simple life of presence, prayer and work, welcoming all those who come, believers and non-believers alike. In the ecumenical context they already feel well integrated at the local level. At the economic level they hope to live by producing the famous cheese of the Abbey of Citeaux.


• Rio Negrinho, State of Santa Catarina, Chile
Finally, the latest news to reach us concerns the foundation which the Trappistine monastery of Quilvo in Chile has made in the south of Brazil. At the beginning of the twentieth century an attempt was made to found a Trappistine monastery in the state of Rio de Janeiro, led by a French monastery, but the foundation did not develop and was closed. The Trappistine vocations which were born there were directed towards the monastery of Quilvo in Chile, while waiting for the possibility of a foundation to mature. Finally, in 2008, plans for a foundation began to become firm, and in 2009 it was possible to buy a property near the town of Rio Negrinho, in the southern state of Santa Catarina, which as yet had no monastic foundation. At this moment the founding community of Nossa Senhora da Boa Vista, composed of eight sisters (one Italian, four Chilean and three Brazilian), has already set up in a provisional residence, awaiting the construction of the first house, destined to be the future guesthouse, and of the chocolate-factory which will be their economic mainstay. 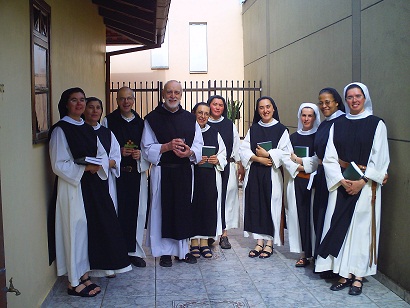 We urgently ask all our readers for any kind of help, in prayer or material terms, for these seven new foundations, and we hope to receive soon their first Chronicles. We also ask that any information concerning any new foundation of the three Orders, Benedictine, Cistercian or Trappist, be communicated to the general secretariat of the AIM in Vanves, Paris.