We have 108 guests and no members online

Monasticism in the United States

The second report given by the AIM USA Secretariat at the November 2009 AIM International Council meeting in Erie, Pennsylvania, was on monastic communities in the United States that are not members of any of the six United States federations/ congregations.

There are many such Benedictine houses in the US – twenty or more, including those of both men and women. Limiting the reports to those founded most recently, members of the AIM USA Board of Trustees shared information on seven communities of women and eight of men.

Seven Benedictine communities of women have begun in the United States since 1960. On the East Coast, in the New England area, we have three groups.

• The Monastery of the Immaculate Heart of Mary is in Vermont. It was founded in 1981 by the Abbaye Sainte-Marie des Deux- Montagnes in Canada. They belong to the Congregation of Solesmes. Today they have 15 members, four in formation: including 2 novices and 1 postulant. This community observes papal enclosure.

• In the nearby state of Connecticut is a community of Jesus Crucified, the Monastery of the Glorious Cross, founded in 2001 from St. Joseph Monastery in Brou sur Chantereine in France. The whole congregation, which began in the 1930s specifically to accept women with disabilities, has just over 100 members. The community in Connecticut has 17 members, all of whom are over 70 years of age. They have a guest house which welcomes visitors and retreatants
www.benedictinesjc.org/GloriousCross.html.

• In the state of Massachusetts is the community of St. Scholastica Priory in the city of Petersham. It was founded in 1980 from Stanbrook Abbey in England. Today they have 11 sisters, and one in formation. Their main ministry is prayer and their selfsufficiency is realized through their annual appeal, hospitality and a guest house. The sisters are a twin community with the monks of St. Mary’s Monastery, and they pray the Liturgy of the Hours and Eucharist with them.
www.stscholasticapriory.org.

• In the east, also, in the state of New York, though not near New York City, is a community of Camaldolese nuns, a dependent priory of Sant’ Antonio Abate on the Aventine in Rome. Transfiguration Monastery began their affiliation with Sant’Antonio Abate in 1981. There are presently three professed sisters including one in process of transfer from the Abbey of Maumont in France. They also have a new postulant. Many lay and religious groups come for days of reflection in their retreat/guest house. They have a gift shop, and give many spiritual retreats. They are involved in interreligious dialogue and the prioress has been a leader in Camaldolese conferences and events.

• The Missionary Benedictine Sisters of the Tutzing congregation has been in the US since the 1920s but has two new priories in the States from their communities in Korea. The large community in Daegu, South Korea has a house in Los Angeles and the community in Seoul, now has a convent in Demerest, New Jersey. Their priory of 325 sisters in Korea has 32 dependent houses and their Los Angeles one began in 1985. The Missionary Benedictine’s Seoul monastery has 18 dependent houses. Their house in New Jersey began in 1997.
www.osb-tutzing.it. 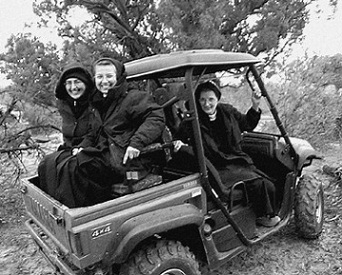 • Finally, out in the far southwest, in Gobernador, New Mexico, is another community of the Subiaco congregation: the Monastery of Our Lady of the Desert. In 1990 they began as oblates of the community of Christ in the Desert but in 2000, Jamberoo Abbey in Australia accepted them as a foundation. They have eight sisters, including two junior professed. They just moved to their new location in the fall of 2009 and are building a retreat center and, eventually, a monastery there. They work for the monks of Christ in the Desert, fund raise, sell their crafts, and have produced a brand new CD.
www.ourladyofthedesert.org.

There are another dozen or so communities in the USA, founded before 1960. For example the sisters of Virginia Dale, Colorado from Germany, have been there since the 1930s but only became independent in 1986.

Abbot Neal Roth, OSB, of St. Martin’s Abbey, Lacey, Washington, shared information on eight communities of Benedictine men whose houses were established in the last 50 years. There are also another dozen longstanding houses of Benedictine men throughout the United States that belong to congregations based in Europe.

• On the east coast, in Newton, New Jersey, is St. Paul’s Abbey of the St Ottilien Congregation. Although they have been in the USA since the 1920s the abbey changed emphasis in 2002 when monks from the Congegation’s Waegwan Abbey in Korea were asked to take over the life there. Today there are a dozen monks whose primary ministry is to the nearby Korean Catholic community. They run a retreat center along with other ministries.
www.newtonosb.org.

• The Subiaco Congregation has four houses in America. In the east is a small community of St. Mary’s Monastery, founded from Scotland in 1985. Their life is strictly contemplative with some small “industries” to aid in their support. Their prayer and liturgy is celebrated with their twin community of Benedictine sisters of St. Scholastica. Both are located in Massachusetts, a State that borders on the Atlantic Ocean.

• Across the country in the southwest, in Arizona, is the larger community of Christ in the Desert. They were founded in the mid-60s from Mount Saviour Monastery in western New York State and accepted into the Subiaco Congregation in 1983. Including their four dependent houses, the community numbers over 60. Two of their houses are in America: one in Chicago, whose monks became a dependent house of Christ in the Desert in 2000 and the newest house, begun in 2008, the Monastery of Thien Tam, in west Texas, founded to assist the immigrant Vietnamese community of that area.
www.christdesert.org. 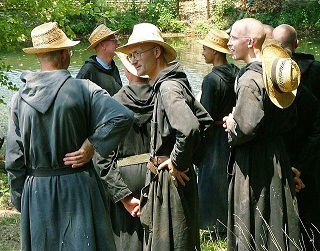 • Also in the south is a house of the Solesmes Congregation, Our Lady of Clear Creek in Oklahoma. In 1999 twelve monks from the French Abbey of Fontcombault arrived in the diocese of Tulsa. They are a growing contemplative community with over 25 monks, including novices and postulants. Their Divine Office and Mass are celebrated in Latin and with Gregorian Chant.
www.clearcreekmonks.org.

• Three communities, members of the Olivetan congregation, are also located in the far west. All of them were founded since 1955 from the Olivetan monastery Our Lady of Guadalupe in Pecos, New Mexico.

- In nearby St. David, Arizona are the monks of Holy Trinity. Their monastery is located on 125 acres of land, much of it devoted to farming. They offer retreat and guest facilities and host days of reflection and spiritual counseling. The priests often assist nearby parishes and are involved in social outreach to the needy.

-  The third group of Olivetans live in Hawaii. This monastic community of men and women have lived their life of prayer and ministry to parishes, retreats and counseling since 1984. They are charismatic in orientation.