We have 557 guests and no members online

Solonka, a foundation in the Ukraine

Until recently Zhytomyr was the only Benedictine Abbey in the Ukraine. For some years the nuns had been preparing a new foundation at Solonka, near Lviv. In 2016 the Archbishop of Lviv, Mgr Mieczyslaw Mokrzycki, proposed to the sisters to undertake Benedictine life in a monastery founded by a Swiss family, whose construction was beginning. In October 2019, on the occasion of the canonical visitation of the Abbey of Zhytomyr, conducted by Abbot President Makzymilian Nawara and the Prior of Lubin, Izaak Kapala, the construction was approaching an end and the departure of the sisters for the new monastery was fast approaching. Nevertheless, the sisters feared that without real help to shape Benedictine life at Lviv this would be a task too difficult. Abbot Maksymilian then contacted Archbishop Mokrzycki to confirm his support for the creation of the foundation at Lviv.

At the meeting in Lubin in August 2020 Mgr Mokrzyclo invited the Polish Benedictine monks to co-create the monastery of Lviv, with the perspective of installing themselves elsewhere later. The archbishop guaranteed his help and in fact wholly made over to the brothers the newly-constructed Chaplaincy.

Nevertheless, none of the Polish monasteries had yet envisaged the question of a foundation in the Ukraine. It was also obvious than none of them was sufficiently strong to do this alone. There were two options: either abandon the project, using the classic argument of not being sufficiently numerous, or co-operation. For the first time in the modern history of the Benedictines in Poland the Abbot President invited all the superiors of the Benedictine monasteries of Poland to Biskupow to discuss the possibilities of co-operation in a real and practical manner. The fruit of the first ‘Synod of Polish abbots’ was a unanimous decision to attempt the project of a shared foundation in the Ukraine. This was a novelty in the Benedictine tradition. Normally a monastery – the Mother House – founds another monastery for which it takes responsibility. On this occasion the brothers were obliged to work out new rules, which they spelt out in the ‘Declaration of co-operation, the Chaplaincy of Benedictine nuns of Lviv’. 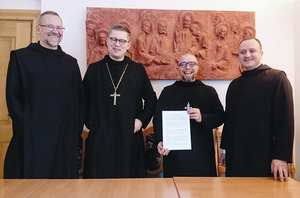 The brothers went to Lviv mainly to support the sisters of the monastery of St Joseph newly created and exercise their ministry in the church of St Benedict of the new monastery. The brothers set themselves up in the building of the Chaplaincy in the hope of finding from there a position for a male monastery, while still keeping the apostolate of the Chaplaincy. Four brothers were sent: from Lubin Abbot Maksymilian (who remains the moderator of the whole project) and Br Efrem Michalski. From Tyniec Fr Leopold Rudzinski, the first Benedictine of Ukrainian origin to be ordained priest in the new church on 20th March, and Br Borys Kotowki. The first three sisters of Zhytomyr are Sr Bernadeta Venglovska, Sr Rita Linenko and Sr Augustyna Tichon.

The first essential was to work out a common rhythm of prayer: the brothers and sisters of three monasteries, each having their own traditions and customs, each needed to learn to take part in the liturgy, abandoning their own familiar forms of their monasteries of origin. The liturgy is celebrated in Ukrainian and Latin. The Sunday Eucharist begins with a shared procession of sisters and brothers. The faithful take part each evening in eucharistic adoration. Each morning the brothers and sisters meet in the chapter-room for a commentary on the Rule by Fr Maksymilian. This is also the moment to speak of practicalities, sharing of work, etc. 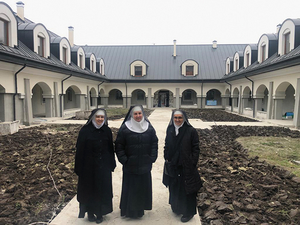 Each day brings new challenges. Two months ago the brothers and sisters were living the major part of the day with workers who were finished the building and correcting faults. The region of Lviv is very humid and it rains almost every day. So it is necessary to find means of reducing the humidity. The monastery is not yet connected to the gas-mains. The guesthouse is now furnished and people are presenting themselves: friends from Poland, brothers from Slovakia. The first priests are arriving for individual retreats.

Catholic faithful of the Latin or Greek tradition as well as Orthodox faithful are warmly welcoming this new foundation. Every day the community makes new acquaintances among the clergy of the archdiocese of Lviv and with the religious communities of the district. As yet they have no sources of income. Therefore every help is welcome.

On 4th June 2020 Mgr Mokrzycki blessed the cross which had been installed over the church of St Benedict. On 19th March the church of St Benedict with the bell and the monastery of St Joseph, were consecrated, in the presence of the Swiss family which built the monastery. On 24th July 2021 Sr Lyudmila Kukharyk made her solemn vows in the new community. This was the first profession of the foundation.