We have 405 guests and no members online

Tamil Nadu (literally ‘country of Tamils’) is a State of southern India. It comprises about 72 million inhabitants in a little more than 139,000 square km. Tamil Nadu is richer and more urbanised than the national average. The capital of the State is Chennai (formerly Madras). Tamil Nadu was created according to linguistic criteria in 1956; it corresponds more or less to the parts of India where Tamil is spoken. Tamil Nadu is distinguished from other Indian States by the richness of its religious architecture. Its official language, Tamil, is one of the most ancient languages of the world. Situated on the South East of the peninsula, Tamil Nadu has a great cultural heritage. It was the first producer of jasmin. 55% of the wind-energy produced in East India comes from Tamil Nadu. In Tamil Nadu the sand of the beaches is rich in minerals, such as garnet, ilmenite, rutile, zircon, silicon, leucoxene or monazite. For years real mafias have laid down the law in this sector. 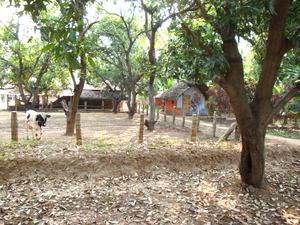 The monastery of Shantivanam was founded in 1950 by two Frenchmen, Fr Jules Monchanin (a diocesan priest) and Fr Henri Le Saux (monk of Kergonan). Their objective was to integrate Benedictine monachism with the traditional life of the Indian Ashram. In 1953 Fr Francis Mahieu (monk of Scourmont, Belgium), who later became known as Francis Acharya, joined the ashram, followed a little later by Fr Bede Griffiths (monk of Prinknash, England). These two last, more drawn to the cenobitical life, founded the monastery of Kurisumala in 1958.

Fr Monchanin died in 1957 and Henri Le Saux, more and more attracted by solitude, set himself up in a hermitage at the source of the Ganges. Only Bede Griffiths returned to Shantivanam in 1968, where he became prior. In 1982 Bede Griffiths obtained the affiliation of the monastery to the Benedictine Congregation of the Camaldolese, a Congregation which favours the eremitical life.

The chapel of the monastery is built on the pattern of Hindhu temples in the South of India. Today the community consists of fourteen monks, or whom four are in temporary vows. 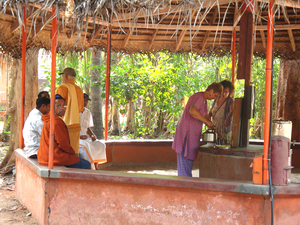 Because of the renown of the Christian mysticism of Bede Griffiths many people came from Europe to spend time at Shantivanam, and the monastery received many gifts. Bede Griffiths encouraged the monks to use these gifts not for the monastery but for the poor of the surrounding countryside (education, guesthouse, various gifts). The monastery possesses only a little farm and a few fields. After the death of Bede Griffiths the gifts lessened. The monks supplied their needs by their farming activities.

Today the resources are less: the yield of agriculture is less than its costs, such as the salary of the workers. The situation is the same for all the small farmers of the country. The community want to augment their herd with twenty more milk cows in order to produce enough milk to be sold. The part of AIM is to repair a building for this project.

The influence of he monastery is important in India and even at the international level. The perspective of interreligious dialogue is always well to the fore.