We have 214 guests and no members online

Reading these two verses of Matthew 23 one could easily be struck by the restrictive character of this text expressed in two sentences, (‘You must not allow… you must call no one’), each followed by an explanation (‘since you…’). So there are two prohibitions, do not give the title of Master or that of Father, between which a lapidary affirmation is subtlely slipped in, extremely positive and explicit, ‘for you are all brothers and sisters’.

In addition, these two verses are clarified by a reading and re-reading of chapter 23.1-12. Jesus is there reprimanding the scribes and Pharisees who have occupied the chair of Moses, and presenting them as negative models. They do not practise what they teach, they show off with regard to their clothing and they like to have grand titles and places of honour in the liturgy and in social gatherings.

Of course the conditions for universal brotherhood must surpass those of the relationship of master and disciple, son and Father. These do not fit into the logic of titles, honours and privileges, for brotherhood admits of no price, no calculation, no pretence. In this perspective the good news imparted by these verses gives full value to that universal brotherhood which becomes an honour and a unique privilege. To be all brothers and sisters together and brothers and sisters of Jesus means rediscovering this dignity of sons of the Father and co-heirs of Christ. In fact, ‘since we are his children we are also his heirs, heirs of God and co-heirs of Christ’ (Romans 8.17). Consequently, there is no more Jew and gentile, no more slave and free. If you belong to Christ you are descendants of Abraham, heirs according to the promise (Galatians 3.28-29, cf. Galatians 4.7; Philemon 16). God’s purpose is to conform us ‘to the image of his Son, so that the Son may be the eldest-born in a multitude of brothers and sisters’ (Romans 8.29). This is at the same time our vocation and our mission, to build a community of brothers and sisters, who welcome and care for one another (Fratelli Tutti, 95). Jesus is the master who reveals to us this call to live and spread the universal brotherhood, which has the value of being revealed. We are in fact all brothers and sisters and in each of my brothers and sisters is found the face of Christ, our one Master, the reflection of the love of the heavenly Father, ‘Amen, I say to you, whenever you do it to one of these little ones, you do it to me’ (Matthew 25.40). 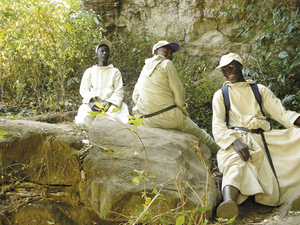 Therefore, as Father Abbot, am I a father who is responsible for guaranteeing brotherhood? However, ‘no one is born a father, a person becomes a father. He becomes a father not only because he has engendered a child, but because he takes care of a child with full responsibility. Anyone who takes responsibility for the life of another exercises fatherhood in this respect’ (Patris Corde, 7). According to this logic there is a certain fatherhood in brotherhood. Whenever someone accepts oversight (cf. FT 222) with regard to our brothers and sisters, by giving time to them, by attending to their needs and contributing to their human development, moral and spiritual, when someone plays an active part in the cohesion of a group by avoiding dissension (cf. Galatians 5.15) provoked by false brothers or sisters (cf. Galatians 2.4ff; 2 Corinthians 11.26), by practising fraternal correction, encouraging mutual support (cf. Romans 15.1), with great delicacy (cf. 1 Corinthians 8.12), leaving room for liberty, choice and departure (cf. Patris Corde 7). In short, whenever I act in a responsible manner with regard to the life of my brothers and sisters, then I am at once brother and sister and father. One sentence of Jesus to Simon Peter sums this up perfectly, ‘Strengthen your brothers’ (Luke 22.32). That is how the exercise of brotherhood demands a presence and constitutes it. This is the firm conviction of the psalmist, ‘How good and pleasant it is when kindred live in unity’ (Psalm 132.1).

‘Lord and Father of humanity, who created all human beings to have the same dignity, breathe into our hearts a spirit of brotherhood’ (FT 287).
Amen !