Nigeria is a country of West Africa situated in the Gulf of Guinea. With more than 186 million inhabitants in 2014, Nigeria is the most highly populated country of Africa and the seventh in the world by the number of inhabitants. The economic and demographic weight of Nigeria has earned it the title of ‘Giant of Africa’.

The subsoil is rich in natural resources (oil and gas) and constitutes the principal source of revenue of the country. The country is the main producer of black gold in Africa. Nigeria produces also a certain number of metals (bronze, iron, lead, zinc) as well as coal.

Nevertheless the country remains relatively poor, notably because of a high level of corruption (export of capital). Thus Nigeria is the only country in the world to dispose of important oil resources but to have a budget deficit. In 2015 more than half the population lived on less than $1.25 a day. Hardly a quarter of the population derives any benefit from the oil revenues.

The country is part of the economic community of States of West Africa. It has sent soldiers to Liberia and Sierra Leone and has offered help to solve a number of crises.
The two principal religions are Christianity and Islam. The North of the country has a Muslim majority, while the South has a Christian majority. Three-quarters of Nigerian Christians are evangelical Protestants and one quarter Catholic. Since 2009 incursions of the Boko Haram movement, which aims to control the population of the North East of the country and set up sharia-law in the other States, has been active in an armed conflict with the Nigerian army. The attacks of Boko Haram have had human and economic repercussions (13,000 dead in Nigeria and more than 1.5 million displaced persons), of which a shortage of food is the most obvious. 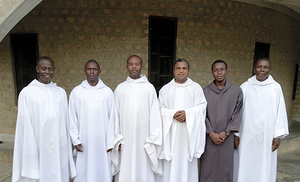 At the request of the bishop, a friend of the community, the monks of Ewu-Ishan adopted a little foundation in the extreme East of the country. This foundation was the project of a diocesan priest who had done a noviciate at Ewu-Ishan, but the foundation had not succeeded in developing. Five monks of Ewu-Ishan were sent to Iwuru, which in 2018 became a cell of the monastery. In 2020 there were already four novices and four aspirants. The foundation at Iwuru owns 150 hectares of farmland. There is a vast plantation of palm-trees, plantains, bananas and cocoa. The brothers have started to produce palm-oil and have a small piggery.

On the property there are already two small houses intended for guests, one consisting of five rooms, and other of four. A great deal of renovation is required to improve the rooms and the sanitary arrangements.