We have 263 guests and no members online

The Missionary Benedictine Sisters of Tutzing

An Excerpt from the Website of the Congregation of Tutzing

The Missionary Benedictine Sisters of Tutzing 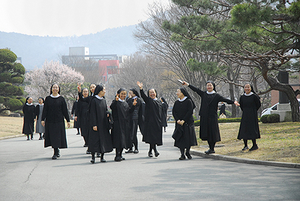 How it all began

‘Global prayers’ is the name adopted by a celebrated contemporary movement of religious renewal on the world scale, and that is how our community could have been represented from the word ‘Go!’ In fact what is today considered new was already put into practice by our sisters several decades ago. They set their hearts on advancing the message of the Good News of Jesus Christ in the whole world. That was why they left everything and committed themselves to an uncertain future.

Their founder was a Benedictine monk of Beuron, Dom Andreas Amrhein (1844-1929), originally from Switzerland. In an era when several missionary congregations came into being – Missionaries of the Sacred Heart (1855), Comboni Missionaries (1867), White Fathers (1868), Steyl Missionaries (1875), Marianhill Missionaries (1882) – the question which was piercing his heart was whether Benedictine life and mission were incompatible. In the course of long years of research and combat within himself, with his superiors and various authorities, he showed his penetrating grasp. Despite numerous obstacles put in his way, no one could prevent him developing his inspiration and putting it into practice. 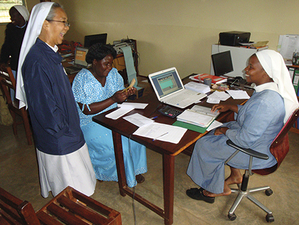 In 1885 Dom Amrhein presented at Münster, on the occasion of the 32nd German Catholic Day, his idea of a ‘Benedictine community for missionary work in foreign lands’. The previous year he had founded a mission-house for men at Reichenbach in the High Palatinate. At that time, so politically anti-clerical, he secretly cherished the dream that women also should share in this task.

The Spark at Münster bursts into Flame

Three weeks later the first four women, all from Westphalia, set off on an adventurous journey to the south of Germany. They wanted to set off for India, but God seemed to have other plans for them. The beginnings of this community of men and women of Reichenbach were difficult. Political conditions of that time dictated that practically everything had to be done in secret. The material situation was extremely complex, not to say hopeless. 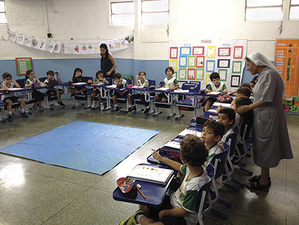 As early as 1887 a second house was founded at Emming, now Sankt-Ottilien, where the whole community soon installed themselves. Riechenbach was wholly abandoned. At Emming the two branches of the community thrived. All lived in conditions of great simplicity and poverty. The communities had to face numerous problems, and were confronted with enormous tasks. Many young people joined this work. It was necessary to provide for them and build quarters in which they could live. It was equally urgent to introduce them to religious life and to form them professionally. They were soon to be sent abroad. There they would be left to their own resources and must be seen to be proclaiming the faith in a responsible manner, at the same time being active in the field of medicine and education as in many other spheres.

First Steps in the World

Very soon Dom Amrhein accepted the offer to take charge of a zone in East Africa. The apostolic prefecture of South Zanzibar had been created by pontifical decree on 16th November 1887 and entrusted to the ‘new German Benedictine Congregation for Foreign Missions’. This was the first time the missionaries of the new family could be sent abroad.

So in an astonishingly short time, that is, from the end of 1887, the first brothers and sisters dared to take the first step which would revolutionise their future: on 11th November 1887 the first group (one priest, nine brothers and four sisters) arrived in East Africa, in Tanganyika. They and others who were expected to follow them began building mission-houses there. They underwent great reverses. Illnesses of which they had no knowledge attacked several of the still young brothers and sisters – the cemetery at Dar es Salaam is eloquent on the subject. In 1889 the first house at Pugu was attacked, and the brothers and one sister were killed. Nevertheless in Germany, despite the bad news, many young people continued to enter. In 1896 the two communities of Sankt-Ottilien numbered sixteen priests, thirteen clerics, forty-six brothers and seventy-one sisters. Need for space at Sankt-Ottilien became more and more pressing, and the sisters were looking intensively for their own house.

The Mother-House, the Path of Independence

So it was that in 1902 the decision was taken to instal the sisters at Tutzing. As early as 1887 the sisters had founded a little community at Reichenbach which ran a kindergarten. Then a large convent was built in a meadow at Tutzing where all the sisters could live. On 1st January, 1904, the community counted 119 sisters. This stage represented far more than a change of place for the sisters. It led them on the road to independence. If at first this was not easy, the future was to show that it was a far-sighted decision which was to lead the community into an unexpected development. The fraternal link with the brothers of Sankt-Ottilien has nevertheless endured to this day. 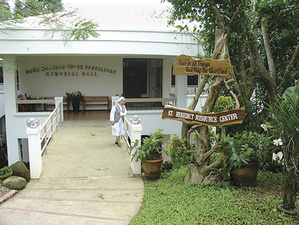 The priority of the sisters was to serve the preaching of the Gospel and be at the service of populations. After the first shared missions (monks and sisters) to what is now Tanzania, where there are still two priories at Peramiho and Ndanda, the sisters engaged themselves under the far-sighted direction of the first prioress, Mother Birgitta Korff, on a new foundation in a country unknown to them, Brazil. An old colleague of Dom Andreas Amrhein at Beuron and Maredsous, Dom Gerard von Caloen, had become abbot of Olinda (Brazil) in 1896, and invited the sisters to take on missionary work in Brazil. He asked Mother Birgitta for sisters for the education of girls. This new foundation took place in 1906. Five sisters left for the Philippines, full of zeal for the mission. Numerous other missions were to follow on every continent.