We have 314 guests and no members online

The Formation of Formators in Madagascar

In the AIM Bulletin 116 of 2019 Dom Christopher Vuillaume, Benedictine, monk of Mahitsy, gave an excellent summary of monastic life in Madagascar. After mentioning that the Madagasy monks and nuns of our monasteries have taken on major responsibilities in our communities, he adds, ‘We in Madagascar are living at a crucial moment when our vocation to seek God in monastic life must express itself fully, and no doubt richly, in and through the local culture, among monks and nuns who will have to translate it according to their own gifts and those of their people. This is a task at once delicate and passionate, a responsibility which no one can take on for them.’

It is in this context that we must acquire for ourselves an adequate formation for our formators, at the same time suitable to our culture and careful to pass on what is really essential. In fact vocations are numerous in most of our houses, especially those located in the more ancient regions of evangelisation, notably the highlands of Madagascar. The average age in our communities is not very high, and in recent years the geographically grouped foundations have spread to the four corners of the Island and even as far as the Seychelles. Nineteen monastic communities of this large region were founded between 1920 and 2014, but eight of them are less than thirty years old, five of them being Madagasy foundations. 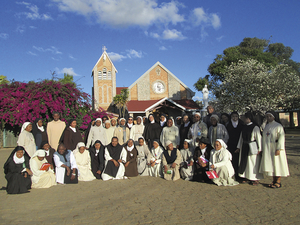 The Conference of Major Superiors in Madagascar organises formations and sessions for novicemasters and mistresses of all the Congregations. Some of our communities participate in them regularly. The formation at Antanarivo lasts an academic year, centred on Lovasoa. Sessions last a week and focus on varied themes, the canon law of religious life, spiritual accompaniment, the psychology of the young and its interaction with the spiritual life, Benedictine spirituality, etc. These meetings and moments of teaching, shared with other apostolic Congregations, are precious, since they help formators to understand better the challenges faced by young people, changes of culture, the expectations of the young and the obstacles they meet in the development of their vocations. But for monastic life itself we have felt the need to arrange specific sessions led by teachers who know our form of life well. Several formators of our communities have followed courses on formation in France, such as the Ananias programme, which is multi-cultural and much appreciated.

In addition to all this, at the level of the Conference of Monasteries of Madagascar and the Indian Ocean, we try to arrange a session for monastic formators which we would like to be repeated every two years, In fact between 2012 and 2019 we succeeded in organising two. The first took place in April 2012 at Ampibanjinana (Fianarantso), led by Mme Thérésa, a psychologist, on the theme, ‘Personal competence in the role of novicemistress, transmitting the charism’ for a little group of nine sisters, six Carmelite, two Benedictine and one Cistercian. In 2016 at Antsirabe Sisters Marie-Florence and Clarisse-Odette, PFM, led a session on the theme, ‘To equip oneself in self-help and help to others’ with twenty-one participants (seven Carmelites, four Claretians, five Benedictines, three Cistercians, two Trinitarian nuns. In 2019 the session lasted twice four days. Sisters Marie-Florence and Clarisse-Odette looked after the first four days. The Jesuit P. Georges contributed teaching on discernment in formation. On the final day a visit of two monasteries on Fianarantsoa closed the session. There were more than forty participants, nearly all the communities having sent at least two people. Postulant-masters, novices, young professed, superiors – all those engaged on monastic formation were represented.

When one asks formators what they expect from formation it is very frequently a question of accompaniment and discernment. Monastic formation touches the whole being, not only the intellectual domain, especially in the countryside and in the life of the monastery. The novicemaster and mistress must be vigilant on every front, formation human, affective, cultural, intellectual, spiritual. They must also be alert that the different cultures in the noviciate itself really fit together in a real communion, rather than being source of conflict. This is a task which requires great openness and many human qualities, notably the ability to listen. This can be learnt better by the advice of an elder person than in books.

During the three sessions between monasteries and as an addition to the very rich teaching combined with a lively pedagogy (alternance of conferences, sharing in small groups, role-play and relaxation-exercises, every participant had the opportunity of an individual session with one of the leaders. This was greatly appreciated, and those who took part in the session realised that ‘our mission to the novices begins with ourselves.’ 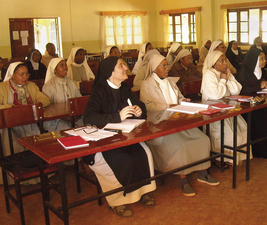 The subjects touched on by Sisters Marie-Florence and Clarisse were: the stage of psychic development, conflict-management and the qualities required to be a formator. P Georges raised the subject of the biblical foundations of discernment, the art of helping young people become adult and mature in their relationship to God and in their responsibilities. He stressed the necessity for the formator to cultivate a deep relationship with Christ, which remains the sole foundation, the purpose of formation and the whole life of the monk.

The need for sessions of this kind is very great. The difficulty is to find leaders who are conversant with the specific needs of monastic life. Another difficulty is the cost of travel. It is only through the help of AIM that the formators were able to come to Maromby in such large numbers in 2019; we are very grateful to them. In future years we hope also to be able to welcome experienced monks and nuns from other regions to help our formators and superiors.