We have 263 guests and no members online

My years at the AIM, M. Mary P. Dolores

This short witness of life and work is the fruit of almost fifteen years of experience at the Alliance Inter-Monastères / Alliance for International Monasticism (AIM) - France. Dom Jean-Pierre Longeat was very kind to ask me to write this piece. He knew my hesitancy to this kind of work, but I just said Yes!

There were people instrumental for my coming to work and serve at AIM. First is Abbot Jeremias Schröder, osb, president of the Missionary Benedictines of St Ottilien - Germany, Sr Gisela Happ, at this time, secretary general of AIM and the aggreement of Mother Consilia Marcellones and my community. I believe there are others from AIM who did not know me but have nodded in agreement that I should come. I was eager to embark on a new adventure in my monastic life and render worldwide service to monasteries through AIM. There was the excitement of being immersed in a strange and new European land and culture. 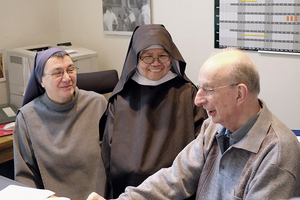 From the Philippines, I arrived in France at the end of September 2005. There was warm welcome both from Sr Gisela who met me at the airport, Father Martin Neyt, president of AIM at this time, and the Benedictine community of St. Bathilde at Vanves. Father Jean-Pierre Longeat succeeded Father Martin and Sr Christine Conrath was co-secretary at AIM.

We relate to people and share ideas through communication. The first important thing then was to learn the French language. The intensive course took me about nine months – not perfect, but daily life and communication became easier. It is a very beautiful and interesting language – a blessing indeed! 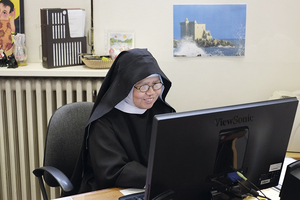 In the next two years, building construction began. The Benedictine proprietor of the monastery buildings consented to the initiative and endeavour of AIM to renovate two building-sites for the Studium and the AIM staff house. Sr Gisela managed this work and we thank all the generous donors for having supported this building work. Sr Mikaël Takahashi, osb, a Japanese sister from the Monastery of the Annunciation in Liège, Belgium, graciously accepted the invitation to take charge of the academic life of students arriving to live at the Studium.

From 2006–2016/17, young Benedictines, Cistercians and Trappistines studied at Paris for their theological formation or other formation courses for which their communities had sent them. In sum, there were sisters/nuns from: Congo (2), Togo (1), Ethiopia (1), Brazil (4), Vietnam (4) and the Philippines (3). Some apostolic Mexican sisters on their way to missions in Africa temporarily stay at the Studium for a language-course in Paris. The sisters who have graduated went home being able to serve their communities better, either as superiors, formators or in community services in other fields. The fraternal life and student ambiance with the Benedictine community have been an unforgettable and beautiful experience which many of them say they will always remember and remain forever grateful to AIM. 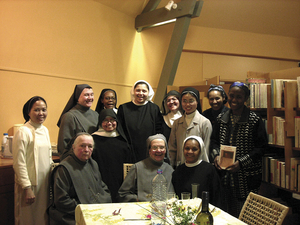 My work at AIM became interestingly varied but at the secretariat, my concern was mostly focused on projects and reports from monasteries. For years with Sr Gisela, we prepared files for the meetings of the Board and Council. AIM holds regular meetings every year. The International Team (seven to nine members) meets regularly, two or three times a year. The Council meeting of AIM in October or November every year is held normally in monasteries outside France. I am sincerely grateful for the opportunity to join these meetings which are very rich because of the topics, discussions and sharing of news around the monastic world. AIM has great concern for the monasteries of the Benedictine family in the world and for monastic life today. Thank you to all the members whom I met during these meetings. Getting to know and having listened to them speak their wisdom was invaluable.

The lighter side of AIM work is the ordinary life. The two or three days of Bible sharing and planning before work at the secretariat was spiritually refreshing and fraternal. Being able to live beside the Benedictine community of Vanves was a privilege where fraternal life and sharing developed during the years. The zeal for the liturgical life is evident. It has been joy to beautify a small garden of flowers as well or just do some dusting around! 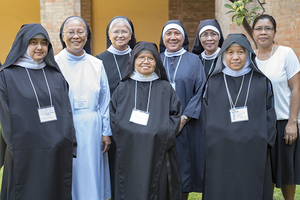 To sum up my experience, I can only say ‘Thank You’ to all the people whom God has allowed to cross my path. A bridge is built in every encounter with different people. I believe European culture has been the nucleus of the culture around which Christianity was formed. The experience both personal and through reading is very enriching and invaluable. There is the tendency to dig its riches through books but there is always a lack of time and exposure! But for all that, I thank God and I thank all who have been God’s instruments to my growth both in spirit and in person.

Before I end, this little narrative would be defective without a mention of the AMTM, the lay branch of AIM who fostered their generosity and its spirit. Their regular Council meetings held at the AIM offices were occasions to meet them. I thanked God for the fraternal friendship developed through those years in the one objective of helping monasteries in the world of AIM.