We have 96 guests and no members online

Permit me to share some initial and random thoughts in response to the paper delivered by the Abbot President of the English Benedictines, ‘Transforming our monasteries for a new era’. What the ‘new’ normal will be is anyone’s guess and there are plenty of wild guesses! Years back in the UK there was a campaign launched to educate young children to cross the road safely, it was called ‘The Green Cross Code’. At the core of its message were three words: STOP, LOOK, and LISTEN. These words returned as I read and reflected on this proposed project.

It struck me that within the English Benedictine Congregation there are five monastic communities that are outside the United Kingdom and therefore have a very different perspective, one that is not rooted in English culture. That is particularly true of the foundations in Peru and Zimbabwe. With regard to Zimbabwe, we were very clear from the outset that our primary task was to plant the seed of monastic life according to the Rule of St Benedict, not the cultural customs and structures of an English monastery. That being said, we were also clear that there was on our part no intention of passing judgement on the latter, simply a desire to face the reality of a new and very different culture. For this reason we spent much time trying to articulate what we thought were the key principles of Benedictine life without which we would cease to be sons of St Benedict.

In other words we did not enter upon this foundation with the notion that we already had all the answers. We came in a spirit of needing to learn from, not just impose upon the culture and people of Zimbabwe. In that sense I have come to understand that the process never seems to end! Life after Covid-19 is in many respects not dissimilar to making a foundation in a new and unfamiliar culture; therefore the experience of the two foundations of the EBC just might have something to offer in terms of flexibility, commitment and patience. Genesis 12 has often come to mind during these twenty-four, nearly twenty-five years – it is has been a journey of faith and trust rather than of absolute certainty.

With this in mind I wonder if as an initial stage of this ‘Project’ it might be profitable if each community within the EBC were invited to reflect on the following questions:

1. What have been two or three positive aspects of our experiences of ‘lockdown’ with regard to: (a) our life of prayer together and personally, (b) spiritual reading (c) fraternal interaction, (d) a deeper appreciation of the Rule?

2. In what ways has the experience focused our sense of monastic identity and mission?

3. How has this experience highlighted our particular strengths or weaknesses?

4. What has it revealed about our traditional apostolates and possible future opportunities?

5. What from the above would we desire to build upon and strengthen in the coming months and years?

These are but a few questions which would perhaps lead to some useful ‘lived experience’ casting a light that in turn might enable each individual monastery to look to the future with hope and then help the EBC (that is, the Abbot President and General Chapter) to provide useful support and facilitation. As the Constitutions make clear, the EBC is a collection of sui juris monasteries of monks and nuns. It is not a corporate entity that can be managed from above, but rather requires a grass-roots engagement with a process of monastic renewal, not dissimilar to that outlined in two exhortations by Pope Francis, Evangelii Gaudium and Gaudete et Exsultate. 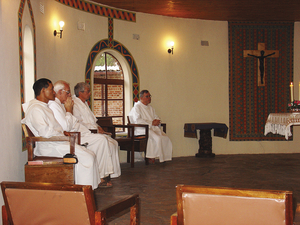 How could the monasteries of our Congregation best respond to the present situation with a renewed sense of mission – a hunger for holiness and to share the joy of the Gospel - and thus lead to a genuine pooling of shared experience, wisdom and resources by following the three elements of the ‘Green Cross Code’? We need of course to STOP, and in many ways the external imposition of lockdown has created just such an opportunity. Yet each monastery could perhaps seek positively to create time for individual members and the community as a whole to engage in serious guided reflection. This leads us to LOOK, perhaps by providing a series of reflective questions, such as the ones outlined above, which could easily be improved upon, so that the EBC might corporately ask the same questions, even if the answers will of necessity be different. But in order to prevent the ‘spirit of introspection’ arising we need to LISTEN not just to ourselves but to the Church in which we are situated. It is one thing for us to ask what kind of monasteries we want to be, but what kind of monasteries does the local and national Church want us to be and (more importantly) need us to be?

Let me be personal for a moment. When we arrived in Zimbabwe we made sure that we came into contact first with the Bishops, priests and religious. To date we have given retreats to every diocese in terms of the priests and given preached or individually guided retreats to members of every religious congregation. This was not merely as an exercise in exposure but a deliberate attempt to learn from them how we could be an authentic spiritual resource. We needed to know what they were expecting of us as monks. What were their real needs? This dialogue has been fruitful and built up trust and has naturally led to the second stage, that of engagement with the lay faithful. If Christ the Word is to be a monastery rooted in the soil of Zimbabwe, then we needed to treat that soil with respect and learn what the soil was truly like. I would suggest that something similar needs to happen with any ‘Project’ to transform our monasteries post-Covid-19.

Anyone familiar with epidemiology will tell you that this virus is likely to be part of our life for years, if not decades to come – I think of the HIV pandemic which continues to infect thousands each year and yet still no productive vaccine has emerged. Viktor Frankl spoke of the ‘barbed wire syndrome’ which caused inmates of concentration camps to die inwardly before they died outwardly. Some saw the wire and lost hope, while others saw the wire and knew there was life beyond. My point is this, much positive has already emerged from the experience of the last three to four months which surely has to be harnessed. Two examples spring quickly to mind. First, the strengthening of our sense of fraternal life due to an enforced enclosure; I am sure this has had benefits that self-conscious seminars on ‘Community Building’ could never have achieved. Second, the creative way that communities have attempted to use social media etc in streaming Masses and retreats which have been highly appreciated even though the quality was not that of Warner Brothers! This creativity needs to continue and develop. This is where we need to reach out to the local and wider Church for advice and expertise. There are many exciting pastoral opportunities that this virus has brought to light, and engaging in dialogue with the Church at large will assist us greatly.

The spiritual vacuum which this virus has revealed is begging to be filled, and our monasteries need to be ready and equipped to move into this ‘field hospital’ situation with clear spiritual resources. If we ourselves however are not looking and reflecting on the Gospel and the Rule and seeing where these can assist the people of our day, then we will retreat into creating programs, structures, strategies that are paper-bound not people-led. They will get people to scratch where they are not itching. This is a God-given opportunity that will truly test the spiritual authenticity of the English Benedictine understanding of monastic life.

I offer these random thoughts in the spirit of wanting to engage in the renewal of our monasteries. I realise this is only a beginning, but it is an exciting one.