We have 264 guests and no members online

Monk of the Abbey of Rio de Janeiro (Brazil)

1. Christo nihil praeponere – to prefer nothing to Christ 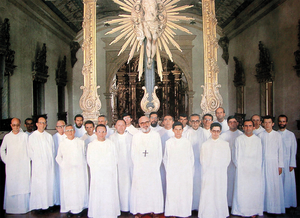 When during the afternoon of 24th November 1961 Dom Basílio Penido received from the apostolic nunciature the decree of the Holy See appointing him abbot-coadjutor of the Abbey of Olinda (Brazil), the young prior and vicar-general of the abbey nullius[1] of Rio de Janeiro, he ‘knew not what to say’.[2] This totally unexpected news shook him profoundly. A happy and heartfelt monk, Dom Basílio loved his community and his brother monks and did not want to leave either his monastery or the city of his birth where his family still lived. Nevertheless, the decree hardly gave him a choice: he must obey – and leave! His intention was nevertheless to say ‘No’ a second time.[3]

To calm him down, his abbot, with the Roman document still in his hand, told him to go before the tabernacle and ‘listen to the dear God’. During this moment of prayer and agony two words came to his mind, obedience and humility. As a former pupil of the Jesuits he had learnt from St Ignatius the virtue of ‘obeying like a corpse’.[4] But also, as a son of St Benedict he well knew that ‘the first step of humility is obedience without hesitation; this characterises those who hold nothing more dear than Christ.’ His prayer finished, his soul in peace, he also chose his abbatial motto, Christo nihil praeponere, (to prefer nothing to Christ). The events which followed showed that the choice was not merely coherent but above all the consequence of everything that would occur during his ministry of abbot at Olinda (1962-1987) and president of the Brazilian Congregation (1972-1996). His departure for Olinda was ‘a real sacrifice of Abraham’.

In 1966 he went to Rome for the first time to take part in the Congress of Abbots of the Benedictine Confederation, the first after Vatican II. Thanks to the circular letters sent to his community at Olinda with great richness of detail, the readers were able to follow step by step the unfolding of the Congress, focused on the renewal of monastic life in the optic of the Council, something neither simple nor easy, as Dom Basílio remarked!

Born in Rio de Janeiro in 1914, he lived there till the age of six, when his father, appointed military attaché to the League of Nations, had to move to Paris with his whole family. Very gifted with languages other than Portuguese the little José Maria (his baptismal name) easily mastered French at the college Sainte-Croix de Paris where attended primary school, and at the same time English at home with his British nanny. After José Maria had made his First Communion in the Parisian parish of Notre-Dame de Grâce de Passy, his family returned to Brazil after three years of absence.

After his studies at the College Santo Inácio in Rio the young man entered the noviciate of the Jesuits. Nevertheless, his vivacity of temperament did not fit the demands of Ignatian discipline. Exhausted, he left the noviciate and entered the faculty of medicine in order, six years later, having received his doctorate, to become a monk. It was difficult for him at that stage to follow the monastic observances. ‘I was flat out’, he used to say. All the same, these experiences had moulded him; without losing any of his authenticity and without the least bitterness, he had matured!

When he had been a medical student he had begun to attend the Ação Universitária Católica where the university young people used to gather, and he found himself at the launch of the Instituto Superior de Estudos Católicos. Many of these, with their great interest in the liturgical and patristic renewal, had entered the religious life and secular clergy. As he found communication easy and was always full of enthusiasm, his general culture, large circle of friends and his great simplicity he soon became a great leader. An open and welcoming personality, thirsty to hear and see everything, though not worldly, no moral, political or social problem escaped him. His spirituality was deeply rooted in the Exercises of St Ignatius of Loyola and in the Rule of St Benedict; he loved also other spiritual authors such as St John of the Cross, St Thérèse of the Child Jesus, Charles de Foucauld and Thomas Merton. A passionate reader of French literature, he knew well the writings of Jacques Maritain, Paul Claudel, François Mauriac, Julien Green, Charles Péguy among others, and also Georges Bernanos, who became a personal friend during the latter’s exile in Brazil. The renewal of the Church, theological thinking and above all monastic life during the post-conciliar years found in him a fervent and faithful supporter. The introduction of this renewal and a changing world required considerable wisdom and prudence, and he did not hesitate to do the right thing when challenges presented themselves. His talent for listening and for community dialogue enabled him gradually to introduce the conciliar reforms and among them especially an ecumenical openness. In 1966 he welcome three brothers from Taizé to Olinda. Living in a house beside the abbey the brothers were well integrated into the community, taking part in some of the liturgical Offices, community meals and manual labour. Care of the poor in a sad condition of distress in the environs of the monastery was a particular preocupation of his. Vast territories owned by the abbey were, with the consent of the community and the civil authorities, given to the most dispossessed so that they could have their own homes. Thus was born at Olinda a new quarter still named Vila São Bento.

To ensure that they keep in step together, at the time of the Congress of Abbots in 1967, at the invitation of Dom Basílio the abbots and priors of the Brazilian monasteries present met together to reflect on his project of establishing closer links of friendship between the different communities living under the Rule of St Benedict. They needed to find a common language which could express the monastic charism, vocation and mission in the face of society. In the fear of losing their own traditions, the abbots had some difficult conversations, for besides the monasteries of the Brazilian Congregation there was a good number of other Congregations. Nevertheless the decision was taken to found a monastic Conference of Brazil, CIMBRA, of which Dom Basilio was elected the first president.

II. In carcere eram - I was in prison

The year 1964 marked a decisive turning-point in the political and ecclesiastical life of Brazil. On 31st March took place a military coup which was to last twenty-one years.

A few weeks later Mgr Helder Camara became Archbishop of Olinda and Recife. At first relationships between the new archbishop and the authorities in power were respectful and dialogue was possible. However, as the regime hardened, acts of repression followed. Imprisonment of the opposition, torture and political persecution made links between the two parties increasingly difficult. Thanks to his good relationships with several officials Dom Basílio became the intermediary between Dom Helder, frankly and openly opposed to any sort of violence, and the military government of Recife. While remaining on the side of the archbishop, of whom he was a faithful and even intimate friend, he managed this tricky mission successfully. A man of great courage, sometimes audacious, during these dark years, when persecution, followed by prison and torture, was touching the lives of young university students, he did not hesitate to shelter some of them in the monastery in order to facilitate their flight and save their lives.

Political prisoners, young or not, were numerous at this time. As priest and doctor he was able to visit them regularly in the prisons. Before entering he had to undergo all kinds of humiliations from the policemen in charge of them, which he tolerated with admirable patience. At community meetings occasionally, very discreetly, he might tell a story. At one of these an indignant brother asked how he could put up with all these difficulties. In all simplicity he gave this answer, ‘Saint Thérèse of the Child Jesus used to say all is grace; you see, God has given me the very special grace of sharing in the sufferings of Christ in this way, and so at the last judgment Jesus will say to me, “I was in prison and you visited me’’.’ Dom Basílio was always a man of pardon and mercy.

His pectoral cross was wooden and bore his motto, ‘Christo nihil praeponere’. One day during a visit a prisoner out of curiosity asked to have a closer look at it, saying nothing. Two weeks later this young man, who was a skilled woodworker, presented him as a sign of friendship and gratitude, in the name of all his fellow-prisoners, a new wooden pectoral cross, identical with the original but bearing the inscription ‘In carcere eram’ – I was in prison. Dom Basílio was very moved and thereafter began to use it.

The love of Christ above all other was the one great passion of his life. His deep attachment to the Church and to the brethren, his tireless struggle for ‘those who hunger and thirst for justice’, especially the poor and prisoners, his firm commitment to renewal of monastic life, authentic and faithful to the tradition but at the same time open and welcoming to modern values, witnessed to his fidelity to Christ and the Gospel. The final years of his life, already ailing, were passed in the monastery of his profession. It was there that he returned to God on 2nd June 2003 at the age of 88. He had opened new ways in the joy and peace of Christ.

[1] Title given by the 1917 Code of Canon Law to territorial abbeys. In 2002 the Holy See suppressed this title and privilege of the Abbey of Rio de Janeiro.

[2] Quotations from Dom Basílio recounted later when Dom Basílio was reminiscing about his life to his novices.

[3] Postulated to be Abbot of Rio a first time in 1948 he had firmly refused election on the grounds that ‘he was too young and had had no experience’ in his own words. He was then 34 years old.

[4] ‘Perinde ac si cadaver esset’, a Latin expression in the old Jesuit Constitutions, which he later loved to repeat in conferences to his novices about obedience.