We have 114 guests and no members online

Discernment of a Vocation according to the Rule of St Benedict

Discernment of a Vocation
according to the Rule of St Benedict

This conference of Dom Bernardo Olivera on initial formation, given at the session for formators at the session of ABECCA in 2019, seems to us useful in explaining concretely such formation on the basis of what St Benedict envisages in the Rule.

The abundance and the lack of vocations are generally causes which underline the importance of discernment. Lack of vocations often invites us to run the risky process of ‘trying out’ candidates. Abundance of vocations may lead to a failure to check out the harvest adequately. Our purpose is to consult the teaching of St Benedict in his Rule, a teaching which covers the ground from the moment just before entry to full monastic profession.

St Benedict certainly had the charism of discernment of vocations, and when it comes to vocations he is highly practical: he bases himself on what can be seen and observed. There are four particular and general criteria offered by the Rule:

The first criterion of the Rule features at the beginning of chapter 58:

Someone who wishes to embrace monastic life should not be given an easy entry, but as the Apostle says, ‘Examine the spirits to see if they are from God’. So if the person who presents himself patiently endures all the trials inflicted on him and the difficulty of admission, and if he persists in his request, let him enter. He should stay for a few days in the guesthouse of the monastery (Rule 58.1-4).

It is a question of a preliminary discernment to test the candidate and see whether he is touched by the Spirit of God in coming to the monastery. Benedict draws attention to two points which are easy to verify, perseverance and patience. The factor of time will help to verify these two aspects. If, after a period of several days the candidate perseveres in his request and accepts the delays put up against him, one can be sure that the Spirit of God has led him to the monastery. This does not, of course, show that he is obliged to embrace monastic life. Patience is the first virtue which the candidate must exercise. Patience – with oneself and with others – is a priority in monastic life. Without patience there is no communion with the paschal sufferings of Christ, nor profound and generous communion with the deficiencies of the brothers of the community
(Rule, Prologue and chapter 72).

Pastoral comment: often, influenced by lack of vocations, some people rush to admit candidates, leaving this criterion aside, though it is mentioned in all the Rules and in general in the monastic tradition. For the same reason the candidate is often not warned of the rough and difficult ways on which the road to God leads (chapter 58).

The search for God

‘To watch with scrupulous care, whether in very truth he seek God and be solicitous as to the Work of God, obedience and humiliations.’ (58,7)

The search for God in this context leads us on the search not for a hidden God but for a God from whom we have turned away and to whom we have decided to return, a God who has anticipated our search by his own search for us (Prologue 2 ; chapter 58). 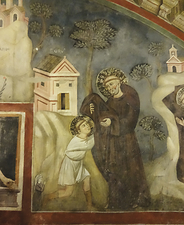 Note that Benedict tells us to ‘observe’. In these terms the criteria of discernment which he puts forward require careful observation. The suggestion is that this observation is done by all the brothers of the community. It is presupposed that the senior capable of gaining souls (the novicemaster) is responsible for this observation in a special way. The observation must be carefully done. This particular observation refers to its intensity and above all to its length. What subtlety and perspicacity do not achieve is easily done by time itself. The passage of time reveals the secrets of the heart. The object of attentive observation is not the intention (invisible) of the candidate with regard to monastic life but his behaviour (visible), and this in a triple perspective: the gift of himself to a life of prayer, the acceptance of the will of others and everything which puts the pride of the candidate under his feet. Note that it is not enough that he should dedicate himself to prayer, to obedience and to humility; he must be given over to it with an acceptance devoted, fervent and full of good zeal.

In what concerns the Opus Dei prayer has the first place. Benedict is consistent with what he says at the beginning of the Rule, ‘First of all, when you prepare to do a good work, ask Him with insistent prayer to bring it to a good end’ (Prologue 4). For the sake of clarity and to leave no room for doubt, ‘Prefer nothing to the Opus Dei’ (chapter 43). Note that the Opus Dei refers to the Divine Office, but as an expression of a general effort of attention to God. Pastoral comment: it is not only the candidate’s ‘request’ to participate in the Opus Dei actively and conscientiously that should be observed, but also the way in which he integrates with the praxis urged on him by formators, use of choir-books, chant, study, history, theology, structure of the liturgy of the hours, mystagogy, the prayer of the psalms, the need for the spirit to accord with the heart.

Benedictine obedience is a consequence of prayer (cf. Rule chapter 6) and therefore has a certain priority. The first step in humility is obedience without delay (chapter 5). The demands of obedience (fervour, good zeal) lead to an obedience not only to superiors but also to all the brothers of the community (chapter 72). This obedience unites the monk to Jesus Christ who said, ‘I come to do not my own will but that of him who sent me’ (chapter 7, quoting John 6). Pastoral comment: it is important to keep in mind that there exist two sorts of obedience with regard to liberty: forced obedience, in which the motive force is fear, and obedience by conviction, in which the motive force is choice. In the first kind of obedience liberty is restrictied by fear of punishment; in the second free will prevails (liberty motivated by reason). This is the voluntary obedience of which Perfectae Caritatis speaks.

The possible source for opprobria is the text of St Basil (Basil’s Rule, 6-7) referring to lowly and common tasks, regarded by the secular world as servile. St Benedict takes over the whole life of the candidate in order to further humility by inevitable humiliations (Rule, chapter 7). This is how the candidate for monastic life begins, by adhering to Jesus Christ who shows himself gentle and humble of heart, and who came to serve not to be served (Mt 11.29; Mk 10.45). Pastoral comment: it is not a matter of being expressly and deliberately humbled, but of accepting a life of service and humility.

Benedict is very concrete: the search for God shows itself in combatting egoism and pride, since they impede communion with Jesus Christ and one’s neighbour.

Let us note also that the three criteria proposed by the Patriarch find a certain correspondence with the ladder of humility. In fact the first step of humility corresponds to the relationship of the monk to God. The second and fourth refer to obedience. The fifth to eighth steps put forwards ways of lowering oneself in connection with shame or humiliation. For reasons which we do not know – literary or pedagogical? – Benedict does not mention silence as a criterion of discernment. Nevertheless steps nine to twelve of the ladder of humility speak to us about it. In short St Benedict’s proposal can be reformulated in two questions: is the candidate for religious life seeking to follow and to imitate Christ in his prayer, his obedience and his self-denial? Are prayer, obedience and humility at the service of a genuine search for God?

Observance of the Rule

The third key criterion consists in the confrontation with the Rule of life of the community. St Benedict says that the Rule should be read to the candidate three times right through before he makes his final profession. The capacity of the candidate to observe patiently what is prescribed is equally a criterion of discernment (chapter 58). Pastoral comment: obedient and humble behaviour must enliven the whole observance of the Rule, and this observance is a supplementary proof of the search for God. Besides the Rule of St Benedict the candidate must know the customs of the Order contained in the Constitutions and the Customary of the Community.

The condition that the candidate for monastic life must show is intimately linked to good zeal, a zeal typical of someone who decides to separate himself from vice and direct his steps towards God. Consequently chapter 72 of the Rule, on good zeal and the most ardent love, offers supplementary criteria to verify the gift of his life and his growth in the life of God. In short, the criteria of good zeal can be presented as follows:

Respect for others (honour)

Renunciation of self, not of one’s neighbour! (oblation)

Fear of God combined with love (the beginning of Wisdom)

Love of the abbot with sincere affection (filiation)

Prefer nothing to the Son (Christocentrism).

Pastoral comment: a novice who does not burn, at least from time to time, with an ardent zeal, even if it is a bit excessive, runs the risk of becoming a mediocre professed monk. Popular wisdom can translate the text of the Rule thus, ‘a new broom sweeps clean, and an old donkey doesn’t break into a trot’.

It is evident that these criteria, especially the criterion of good zeal, have a value not only for entry to the monastic life and perseverance, but also for the passing of the monk or nun to eternal life. Because of its Gospel basis, the teaching of the Patriarch retains all its value. The teaching of St Benedict set out above must be taken up and re-translated for the circumstances of today’s world. The way in which these principles are incarnated can change and be enriched.