We have 417 guests and no members online

A Journey in the Argentine (continued)

A Journey in the Argentine (continued)[1] 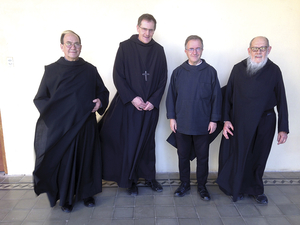 A visit to the monastery of Niño Dios in the region of Paraná, near the town of Victoria.

We arrived at about midday, having passed through large expanses of the Argentine pampas under a magnificent Spring sun. The abbot came to meet the car in front of the monastery, and we found the community in the cloister, ready for lunch in the great refectory. There are about a dozen monks.

The monastery of Niño Dios, the Child God, was founded by the Abbey of Belloc (France) in 1899, the first Benedictine monastery in Latin America. The Bishop of Paraná wanted a solid and numerous community of religious for his vast diocese. He went to the sanctuary of our Lady of Luján and asked the Virgin for a religious community for his diocese. He was put on the track of the Abbey of Belloc by a French missionary priest. The civil authorities of the time would hardly have allowed the establishment of a religious community or order unless it was dedicated to education or social activities, so that the monks were pressingly begged to open an industrial agricultural school as soon as possible. As for the activities developed by the community in the course of these years, the pastoral care of the town and the whole county of Victoria from 1899 to 1988 should be mentioned. The parish, placed under the patronage of Our Lady of Aranzuzu, a vast area including islands, with many chapels and religious centres, was served exclusively by the monk-priests of the community. 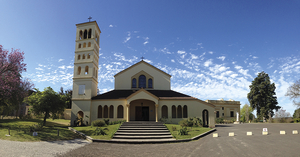 Their priestly and missionary activity was not limited to Victoria and the province of Entre Ríos but stretched out into various regions of the country. In some of them the monks remained for several years. In Our Lady of Itatí, in Azul, in the province of Buenos Aires, they were responsible for an asylum, a chapel and a school (from 1921 to 1934). At Larramendy in the same province of Buenos Aires they looked after a school and a country chapel (1917-1924).

The abbey has founded several other monastic communities, the Abbey of Christ the King at El Siambón, Tucumán (Argentina) in 1956, the priory of La Pascua at Canelones (Uruguay) in 1976, which has unfortunately just closed. In 1982 they assumed the responsibiity of the priory of St Benedict of Llíu-Llíu in Limache (Chile). The private Institute of John F. Kennedy in the town of Victoria has depended on the abbey since 1965, and the Institute of Education San Benito, dedicated to the formation of teachers and professional development has also been is also under their care since 1983. The community promoted the construction of a residential quarter, whose first section was inaugurated in 1971. The social and sports club San Benito, the centre of various cultural manifestations, whose antecedents go as far back as 1959, was also born at the initiative of the monks, and it should be noted that the abbey is an important employer in the region.

In 1997 the community elected its present abbot, in the person of Dom Carlos Martin Oberti. On 29th August the new abbey church was consecrated. It is built in a luminous neo-Roman style, and is dedicated to the mystery of the Birth of Our Lord Jesus Christ. 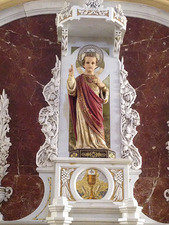 After the meal there was a meeting with the community, clustered round the Benedictine liqueur which the monastery makes. We spoke of the situation of monastic life in the world and the emphases which should be encouraged. It was a good discussion, each giving an echo of his own experience and speaking of the subjects nearest his heart. The community is at a special moment since the prior of the monastey of Cristo Rey died recently on a mountaineering expedition. His body was found some days after his death, a difficult stroke for the monastic family. After this meeting we made a tour of the monastery and particularly the crypt, where is installed the famous statue of the Child Jesus which was brought from Belloc and which gives the monastery its name. The fact that this great monastery is today reduced to a little but lively community is striking. It should be entrusted to the Father to fulfil its work just as the Son of God did.

Monastery of the Benedictine Sisters of Paraná

We arrived at the monastery of Paraná in the evening . It is a foundation of the Abbey of Cordoba. We were welcomed by the little community of eight sisters, a spontaneous welcome, warm and open, giving the impression of a family. The prioress, Mother Isabel, is a lady of experience, the spiritual heir of the Abbess of Cordoba, Mother Candida Cymbalista, of whom I spoke above (Bulletin 118) ; she speaks excellent French. I attended Vespers and then we dined at the guesthouse in company with two young ladies who were staying there. They work in that region for a French cheese-firm called ‘le Caprice des Dieux’. We chatted pleasantly while one sister of the community stood near me, like Abraham at the Oak of Mambre. I was uncomfortable and tried to join in serving, but she would have nothing of it and was determined to carry her service through to the end. 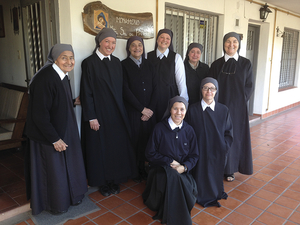 After the morning Office Mother Prioress took me on a visit of the place. We began with the new buildings of the jam-factory. Formerly tucked into precarious workshops, the community and its employees can now expand into better-adapted spaces with all the necessary technical facilities. The bursar of the monastery is legitimately proud of the assistance (including that of AIM !) which she gathered up to arrive at this result. The community has been permanently under construction since its foundation in 1987. The number of nuns has always been limited to about eight. Several young people have joined, and slipped into the customs of the original community. The sisters are looking forward to the construction of a small church, when the present church will become a library. The interior of the buildings for the community could be extended into a final wing which would complete the cloister.

Right from its beginning this community has been marked by its openness to the people around it. The neighbouring village was set up by a colony of Germans from the area of the Volga. This too is in constant construction. It does not yet have the status of a municipality although it is three or four generations old. The region of Entre Ríos in which we are is marked by the existence of villages or towns created by migratory movements of the nineteenth and twentieth centuries.

Mother Prioress insisted that I should visit the village. We passed a very German church with a low steeple (because of lack of funds). There is a small supermarket from where the sister who was guiding me made several sorties to a pharmacy, a school and various leisure areas. Everyone knew everyone else: it was like one large family in which all the sisters have their place. Everyone greets them and has a little chat.

Returning to the monastery we found a number of people at the door. The sisters are accessible, but do not allow themselves to be invaded. The monastery has also a group of about twenty very loyal oblates. It was impossible not to be touched by this little visit. In a certain way the community of Paraná shows possible directions for monastic communities of the future. Of modest size, inserted into the countryside both social and ecclesiastic, these communities, well rooted in their vocation of prayer and community, are a positive sign and a hope that social life can be good, and a more fraternal world can be envisaged. Fragile as it is, the community at Paraná has a part to play. 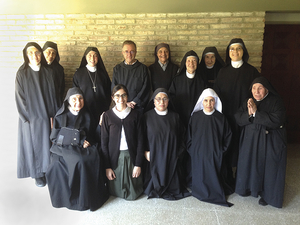 Departure from Paraná at eight o’clock in the morning. Sister Andrea took a lift and Mother Isabel would also be on the journey because both of them are to take part in the meeting of EMLA at Cordoba where I too am to be. The first leg of the journey took us to Rafaela, a town located some three hours away. There is a foundation of the Abbey of Santa Escolástica de Buenos-Aires (the first community which I visited on my arrival in the Argentine). Santa Escolástica has also founded a monastery in Uruguay and another in the Argentine at San Luis (which has just been reduced to the status of a dependent house because of its difficulty in developing.

We arrive at Rafaela for the Sunday morning Mass. There was a crowd because the sisters were welcoming the group of deacons of the diocese, about fifteen of them. In the course of the ceremony two new members were to be admitted as candidates for the diaconate. This is the group which is animating the Mass. The community joins in the chants and general high parochial ambiance, though keeping to their place in a reserved part of the church. The community of sisters of Rafaela was founded at the request of the bishop, who was then a great friend of the Abbey of Santa Escolástica. The sisters were installed in a diocesan centre and built the monastery on the edge of this centre. They were entrusted with the ministry of welcome and animation, which gave them a wholly particular status in the diocese. It is an interesting example of how the Benedictine way can adapt itself even drawn from a relatively classic stem like that of Santa Escolástica.

The monastery is very lively and its prayer-life is full of all the intentions of the local church. The sisters play a concrete part in the welcome of groups for discernment of vocations and preparation for baptism. They maintain a well-nourished contact with the bishop and his priests. Their guesthouse is full at least for every weekend throughout the year. After the Mass the sisters showed me round the property, underlining the support given by AIM. They have a workshop for liturgical ornaments and make hosts. After lunch we left for the five-hour drive to Cordoba. 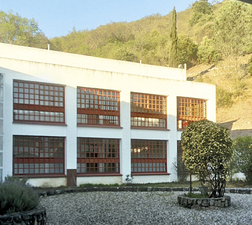 When we arrived I found to my surprise a quite different context with the young community of Benedictine sisters of Cordoba. They are rightly named Gaudium Mariae the Joy of Mary, with reference to the episode of the Visitation to which the community witnesses with fitting joy. We were welcomed with open arms especially because other members of the session had already arrived. We shared a picnic supper and I was glad to see again in this lovely atmosphere several superiors and other members of communities whom I had already met in earlier sessions in Latin America.

The session of EMLA took place in the days that followed. They were rich in varied interventions, meetings, visits, strong in spiritual value. Monks and nuns need to meet to support, inform and encourage one another to live their life with the dynamic of the Word of God (that was the theme of the session) under the guidance of the Gospel. May God be blessed for such gifts in the strength of his love!