We have 176 guests and no members online

Benedictine Sisters of Notre-Dame du Calvaire,
Women on a Journey

As a small Benedictine Congregation, currently in four different places, Angers, Bouzy-la-Forêt (diocese of Orleans, 10km from the Abbey of Fleury), Jerusalem and Prailles (Deux-Sèvres in the diocese of Poitiers), we are celebrating this year our fourth centenary of foundation on 25th October, 1617, at Poitiers. We are glad to share with you by these lines what unites us. Despite our current weakness, it is a true force, a grace: as a Congregation we were founded in a family spirit. Today, with the celebration of our 400 years, we are travelling all together on a real road of renewal in the footsteps of those who went before us.

The foundation of the Congregation occurred at the beginning of the seventeenth century, at a complicated moment of the history of France, when politics and the spiritual life were closely related, when the confrontation between Catholics and Protestants was tearing the country apart, following the Protestant Reform which took place just a century earlier (31st October, 1517). A movement of Reform followed also in the heart of the Catholic Church with the Council of Trent (1545-1563). It was a period rich in spiritual renewal, as Orders were set up in France, such as Carmel (1604) with the Cardinal de Bérulle, and the Visitation (1610) with François de Sales and Jeanne de Chantal.

Our foundress, Antoinette d’Orléans (1572-1618) belonged to the high nobility. Cousin of Henry IV, married to Charles de Gondi, by whom she had two children, widowed at 24, she sought, following the longing for the religious habit which she had felt since childhood, a convent where a strict reformed life was lived. So she entered the Feuillantines of Toulouse (a Cistercian reform of the sixteenth century) in order to live there the humble and hidden life which she sought. She was taken from there by order of the Pope in 1605 to reform the Abbey of Fontevraud, a reform which she could not achieve against the resistance of the sisters and the opposition of the abbess. She found herself compelled to go into exile in the Fontevrist priory of Lencloître, and then to leave the order of Fontevraud to found with 24 other sisters a new Congregation at Poitiers, with the support of the Capuchin Joseph du Tremblay. Six months after the foundation she died, exhausted. Fr Joseph took upon himself the support of the fledgling Congregation, and gave it a solid spiritual formation. He wrote constitutions and set up a seminary in the Parisian monastery of Marais to form future prioresses. Between 1618 and 1638 sixteen monasteries were founded in the West and in Paris. Under the name of Our Lady of Calvary, taken over from Fontevraud, the Congregation honours the compassion of the Virgin Mary as she stood at the foot of the Cross. Centred on the contemplation of the paschal mystery, it is inspired by the spirit which leads it to pray for the unity of the Body of Christ and for peace in the Holy Land. It has inherited from the seventeenth century the practice of personal annual retreats for ten days, and Saturday retreats, centred on the mystery of Holy Saturday, Christ’s great Sabbath.

The Congregation, of pontifical right, is composed of four autonomous monasteries, governed by prioresses elected for six years (renewable). They are united in the same spirit, under the guidance of an elected Prioress President. Since 30th April, 1987 the Congregation has been aggregated to that of Subiaco-Monte Cassino. The monasteries follow the Rule of St Benedict, with an emphasis on simplicity (prioresses rather than abbesses), of which St Benedict in the cave of Subiaco is the model.

The present Condition of the Communities

In 1991, conscious of the fragility of the Congregation and the evolution of the world, a reflection was held which led to a geographical re-shaping of its members. 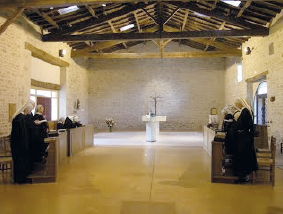 Monastery of the Annunciation at Prailles

The first monastery of the Congregation, founded on 25th October, 1617, has the aim of the unity of Christians, which has been an integral part of our inspiration since the beginning. As a sign of unity at the end of summer 1999, six sisters walked from Saint-Julien-l’Ars to Prailles with four Protestant sisters, deaconesses of Reuilly, stopping at Catholic and Protestant communities of Poitou. Each year on Easter morning Protestants and Catholics come together to celebrate joyfully the resurrection of the Lord and share breakfast! In 2017 an umbrella pine, symbol of the Protestantism of Poitou, was planted at the request of the local reformed Protestants.

Our Benedictine life invites us to bless God for his creation, for everything he has entrusted to us. It carries a note of sobriety, sharing and renouncement of superfluities. Our work, our food, our habitation and our awareness of the environment help us to play a part in today’s ecological challenge. In the 1950s the community opened a printing shop. In 2011, faced with the growing complexity of the trade, a community reflection let us to return to typography. We are investigating the possibilities offered by this traditional technique to find a work which is more manual and creative, more compatible with our monastic life. The creation of religious cards and little carnets by hand, with lead characters engraved in wood, printed on a plate, is the fruit of our meditation on the Word and of our prayer. 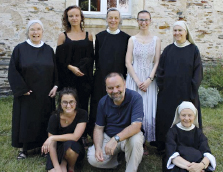 Monastery of the Presentation at Angers

The monastery of the Presentation, remaining on the same site as the foundation in 1619, is a witness to our history. A ‘Staircase of St Benedict’ was set up in 2016. It offers young women a space to base their lives on Christ with the values of human and spiritual wisdom seen in the Rule of St Benedict. This historic place harbours also a Carmelite community, missionary brothers of Mary Immaculate, and the Lazarus Community (housing shared by active young people and those who need their care).

Monastery of Notre-Dame at Bouzy-la-Forêt

We have the good fortune to be situated 10km from the Abbey of Fleury at Saint-Benoît-sur-Loire. We have a good relationship with the monks, nourished by prayer, mutual help and the joint celebration of the festivals of St Benedict and St Scholastica.
With them we mount also an ecumenical evening at Pentecost and on the eve of the Transfiguration. Many Christians of all traditions come to join us for this time of prayer and mutual understanding. 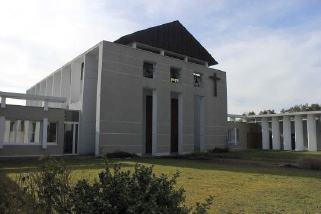 Our principal work is the making of Eau d’Emeraude a skin-lotion based on honey and plants. This gives us a livelihood. It is also a fine way of participating in the divine creation and wonder at the richness and beauty of nature. It also gives us solidarity with our brothers who suffer. We try to ensure that our work is a work by which God is glorified and our brothers soothed.

A sympathetic welcome is important for our life as Benedictines of Our Lady of Calvary, and we offer a haven of silence and prayer to many groups of the diocese and anyone who wishes to share peace and sympathy at the source of living water which is Christ crucified and risen. Oblates and friends of the monastery form a source of prayer and help around the community. With them we experience a real exchange of gifts which enriches both of us.


Monastery of the Mount of Olives at Jerusalem: a unique place in the Church and in monastic life

‘Jerusalem! How long has my heart leapt for joy at this name. The Daughters of Calvary are at last to set up their tent there to honour and imitate the Passion of the divine Master, to join the holy Mary in her suffering!’ (Extract from a letter from Mother Saint-John of the Cross, superior general from 1886 to 1902) 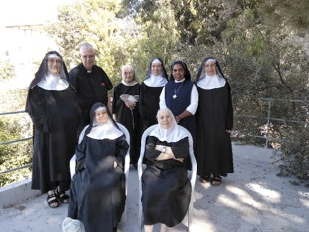 Today our community is international and includes sisters who have come from the Arab and the Jewish world, a real challenge! To endure under trials and to persevere in prayer on the Mount of Olives like watchers on the ramparts of Jerusalem, where Jesus loved to withdraw with his disciples, where he lived through his Agony and his Ascension, facing the esplanade of the Temple which he so often visited, facing Calvary and the Holy Sepulchre where he offered his life to bring into unity the scattered children of God! To learn to live through political turbulence and the human tragedies which come in its train is a fine anchorage of the ‘God with us’ which forms the basis of hope in the hearts of those who share life with the community. To love every person, whoever it may be, who knocks on the door, and to share with such a person the sense of the life lived by each, since God is that sense; to welcome pilgrims who are seeking a place of prayer and silence or looking for a witness is an important dimension of our mission in the Holy Land. The Word of God in this land where the Word became flesh resounds strongly. It nourishes our lectio divina, and inspires the icons which we paint in our studio. The message which they give touches people the world over; we are glad to have a part in the new evangelisation.

On the slope of the Mount of Olives, facing the Old City, our garden offers fruit almost all the year round. In the autumn the community is helped by volunteers to harvest the olives, which make an excellent oil. An appeal has been launched to enable the place to remain monastic ground of prayer and unity, to suggest to Benedictine sisters of other Congregations and continents to come and live with us for a year or more, and if possible for ever, aware of the poverty and richness of this unique place in the world. Help is being sought particularly from the Congregation of Tutzing.

Behold I make all things new!

The word RENOVAMINI on the invitation to the colloquium which is to take place at Poitiers on the approaching 26th and 27th October, taken from Ephesians 4.23, was drawn from our ten-day retreat. It expresses our desire to live out our fourth centenary by allowing ourselves to be profoundly renewed by the grace of this jubilee, and to open ourselves fully to the work of the Spirit who ‘makes all things new’. At the time of our general chapter in 2007 one of the sisters alerted us to the fact that we would be celebrating our 400 years in ten years time. We used the time in between to live a novena of years, an interior pilgrimage which would lead us to the celebration of this anniversary. The time has been marked by lovely meetings of Congregation in our monasteries of Bouzy-la-Forêt and Prailles, pilgrimages to our places of origin, Saumur, Fontevrault, Lencloître and Poitiers.

A major work of classification of archives has been undertaken in all the communities, thanks to Sister Lydie who came to all of our four communities, and then Ellene, a young archivist who is helping in the project. This reminds us of the importance of living memory, of human and spiritual resources of the sisters who went before us and opened the way. Today, supported by these roots which carry us, we are invited to write a new page of our sacred history. ‘To open the past again, to set free its possibilities still to be fulfilled. Is not Christianity par excellence the community of those who believe that eagerness and hope spring from memory?’[1]

An exhibition, ‘Des femmes en chemin’ (Women on a Journey), has been set up, making use of our archives. It traces our history and considers all these events in the light of the spirit of grace and prayer in which we were founded.