We have 217 guests and no members online

The traditional concept of a foundation is that which follows the classic missionary movement from the northern hemisphere down to the south, from Europe to Africa, Asia and Latin America. Today, the movement is more south–south, and in some cases south–north, due to the shift in numerical strength.

The movement from south to north

The fact of numbers means that in some cases monks and nuns are moving from the south to the north, especially to Europe, either to join these monasteries or simply to provide help and support to ageing communities, or alternatively, to be trained and helped by the European monasteries. At times, the intention is to take possession (occupation) of these monasteries or even to start a new foundation by people brought from the south: Africans, Asians and South Americans. There are several monasteries of this kind in Italy teeming with Africans, Asians (especially Philippines and Indians), and Latin Americans. The spread is all over Europe.

Where the numbers are sufficient foundations are often made in the south from the south. Often, this is like a national expansion, when new communities are founded within national boundaries. However, in some cases foundations are made across national boundaries and even between continents. For example, there is a new monastery of Benedictine nuns just recently founded in Zambia from Santa Lucia in the Caribbean, and another in Angola founded from Nigeria. These are very recent foundations.

The nature of the foundation of monasteries differs from one to another. Usually, we say it is the community that makes the foundation. However, there are cases of individuals who simply go off to make a new foundation, some with the blessing of their communities, others without. There are those who request leave of absence or an indult of exclaustration to start a new community, still some others are ex-monks or ex-nuns who gather together to form new monastic communities.

‘That in all things God may be glorified.’ Unfortunately, however, the glorification of God is sometimes not the clear reason for the foundation of a new monastery. There are those communities which desperately need to make a foundation to reduce the numbers concentrated in one place. This makes sense as a community becomes very large, very tight and overcrowded. There are also new foundations started because a community is pushed to do so by an overzealous or ambitious leader or a powerful part of the group who see this new venture as adding an extra jewel to their crown. There are also monks and nuns whose one dream is to see a monastery founded in their home town or village or diocese, and so off they go.

There are some ex-monastics who, having been dispensed from their monastic vows for whatever reason, cannot see themselves living outside of a monastery. This is very common in Nigeria among ex-nuns because it has socio-cultural roots. The Nigerian Association of Benedictine and Cistercian monasteries once wrote to the Nigerian Catholic Bishops Conference, to bring this to their awareness and also to ask them to tackle the problem of spontaneous monastic foundations which were springing up like mushrooms in many dioceses. The majority of these spontaneous foundations were started by ex-nuns; and a few also by ex-monks of either of the two traditions. Some Bishops seem not to care about who or how foundations are made. What is important here is that a monastery gets established in the diocese, and this is seen as a thing of prestige. Also, a new foundation will likely get ready approval if it makes no financial demands on the Bishop or diocese. In this way they come as free gifts to the diocese. 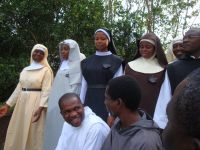 By and large, European communities are ageing and numerically declining. In countries of the developing world, there are many foundations which are doing very well; these take up the challenge of rooting themselves in an authentic monastic culture, and could be described as progressing in a healthy manner. But elsewhere one finds communities equally teeming with young vocations but whose state of affairs is quite precarious by reason of their fragility and instability. Often the numbers are big but the communities are very poor, and so survival becomes the first and major priority. Consequently, everything else is secondary, and this offsets what should be the healthy balance required by a proper monastery between time allotted for work, prayer, studies and other community activities. Often, in these communities too much time is spent on manual labour and on roaming the streets in search of benefactors and benefactresses. Some of the peculiarities associated with these foundations are:

1. At times too many people for too little inhabitable space means that the available little rooms are shared, inmates are paired.

2. Generally, there is the difficulty in filling positions of responsibility in these communities.

3. Lack of competent persons to assume leadership positions. This sometimes leads to authority and power being placed in the hands of incompetent persons who wield them recklessly as tools or instruments of control and destruction.

4. Lack of competent persons also means that the floodgates are unchecked; this leads to lack of accountability and records.

5. The lack of good formators also means that formation suffers, the transmission of monastic life cannot be guaranteed, and there are no proper training programmes for the young monastics.

6. A constant problem in these foundations is how to establish appropriate and viable income-generating projects.

7. Often in these communities there is so much time invested in subsistent agriculture that no time is left for nurturing spiritual growth, no time for personal prayer, lectio divina, reading, accompaniment etc.; even the divine office is compressed to create more time for work.

Numerical strength is a blessing, I believe. However, at the end, it is obvious that growth in number is one of the weakest points in the chains of monastic values. It does not automatically translate into authentic community growth or monastic commitment. Also, teeming numbers do not necessarily bring independence in ideology or economic autonomy; neither are they a sure sign of maturity in community living. Once the numbers have been acquired, the real work, as I see it, is how to transform the numbers into true monks and nuns.