We have 277 guests and no members online

The monastery of Katibunga was founded in 1987. It is a community of missionary monks founded by the African Benedictines of the Abbey of Hanga (Tanzania) of the Congregation of St Ottilien. It is located 85km from the town of Mpika.
Over and above its engagement in prayer and work according to the Benedictine rule, the community has always been alert to respond to the needs of the local population. The services it renders are:

The monastery has built a new church which serves for both monks and parishioners.

The classrooms of the primary school at Katibunga have been enlarged. Two houses for the professors have been built and others are planned progressively, according to gifts received from benefactors.

Each year at the end of the rainy season the monastery repairs the 25km of road leading to the main road for the town of Mpika. It organises a weekly minibus for the transport of local people to Mpika.

The monastery has a water-mill for corn which helps the people of Katibunga and other neighbouring villages to mill the grain which is their staple food.

The community farms for its own needs and also for those of the surrounding population.

Forestry: the community has planted a hectare of soft wood.

Orchard: the monastery has planted a large banana field for the use of the community. The surplus is sold at very low prices. Another part is given over to oranges, lemons and mandarins.

The community possesses a vegetable garden in which it grows all kind of vegetables, such as cabbages, onions, carrots, tomatoes, etc.

Fish: the community has 3 fishponds.

Poultry: the community works a co-operative for chickens. Each shed houses some 300 hens. The compost produced by these birds is used for the orchard and vegetable garden, and has greatly enhanced the fertility of the soil.

Focusing on these agricultural activities, the population views the community differently. Many now copy the monks in their agricultural endeavour: on a smaller scale they look after their poultry better and their sheep and goats. They produce maize in large quantities and also millet, sunflowers and beans. Thus they provide food for their families and sell the surplus. The monastery is considered a centre for learning agriculture; the community teaches the local people to intensify their own farming.

The village of Katibunga, which is a considerable distance from the town of Mpika, relies heavily on the monastery for its basic needs and emergencies. The monastery could still do more to enhance the life of the local people, for example by maintaining the care-centre and setting up a hydro-electric plant for this centre, for the primary school of Katibunga, for the houses of the professors, private housing and the monastery itself. The monastery has plenty of vocations and sadly lacks a house to shelter the noviciate, which currently has ten members. This is a fine hope for the future.

In 1947 two priests of Kerala founded a little community, the ashram Silubaigiri in the diocese of Selem, Tamil Nadu, intending to lead a life of monastic spirituality with a plan for inculturation and evangelisation. In 1852 the community was canonically created a dependent prior of the Abbey of Saint-André at Bruges in Belgium (Congregation of the Annunciation). In 1957 the ashram moved to its present location in the south of Bangalore. In 1976 it became a conventual Priory. Currently the community includes 36 solemnly professed monks, 8 temporally professed and 5 postulants. It has several dependent houses.

The monks offer accomp-anied retreats, both in the framework of the monastery and beyond for children of the primary and secondary schools in English and in the local language (Kannada). The community is also engaged in the education of local children, in helping local people in need and for apprenticeship in carpentry and milk production.

In 2003 the monastery of Asirvanam sold part of its land and bought another plot at Sivagangai, Tamil Nadu, with the intention of establishing a foundation. The monks there have opened an orchard for coconuts, mango, sugar-cane and rice. The house is one km from the village of Karungalakudy. Four monks are permanently resident there, and some monks come from Asirvanam for a period. The nearest parish church is at Okkur, about 5 km.

The Benedictine monastery of St Joseph was founded in 1962 by five Indian monks who decided to leave Sri Lanka to set up a monastery in India. From the beginning the community started to grow. In 1964 it began its own noviciate, and achieved its own formation in philosophy. In 1983 it was raised to the status of conventual Priory. Following the Sylvestrine tradition, the monks live a common life with manual labour and the ministries of evangelisation, education, preaching retreats and welcome.

At present the monastery has five dependent houses. It looks after parishes in the Syro-Malabar as well as the Latin rite, study centres, a school of philosophy, a typing school, an information centre and a social centre. It has recently opened an ecumenical and interreligious retreat centre, Shanti Mikethan. In this centre people of all confessions and all status are welcomed for a time of prayer and reflection.

The Sylvestrine Congregation also possesses a Priory which is rapidly developing in the diocese of Calcutta, as
well as four other houses apart from St Joseph at Makkiyad: Benhill in Iritty (Kerala), Vanashram in Karnataka
(Bangalore), Jeevan Jyothi at Sivpuri (Madya Pradesh) and Askisadan (Assam). A few Sylvestrine monks of these Indian monasteries are in the Priory of Cebu in the Philippines, directly under the responsibility of the Abbot General.

Taken as a whole these houses comprise 51 monks solemnly professed, 7 simply professed and about 30 postulants.

Benedictine Nuns of the Eucharistic King at Cogon (Philippines)

The Abbey of Our Lady of Peace was founded at Cogon in 1982 by the Abbey of the Immaculate Heart of Mary at Vigan. At present the community comprises 28 solemnly professed, 4 temporarily professed, 3 novices and a postulant. The monastery is located in the hills of Cogon in the little village of Digos City. Not far away are the monks of the Congregation of St Ottilien. The nuns observe the constitutional enclosure and fulfil the office of prayer while remaining attentive to the service of the poor who come to the monastery each day. There are also several missions. They themselves look after the daily needs of the monastery apart from gardening, repairs and entertainment. Guest accommodation consists of a spiritual centre for those who come to make a retreat, a recollection and several psycho-spiritual workshops. It is one of the largest centres in the
region and is used to accommodate the monthly meetings of the diocesan clergy and groups of religious and layfolk. It can serve also for retreats or recollection of various school groups.

Sources of income are the production of altar-breads, liturgical vestments, decorative candles, a bakery, medicinal herbs, poultry, pigs, rice and a shop.

The abbey has several apostolates:

Monthly formation of oblates for the dioceses of Digos and Tagum. Two sisters participate to run the meetings.
Help for the poor: bursaries for one or two young students, annual programme for poor children, daily distribution of food for poor families.

Several sisters are helping monasteries or structures elsewhere: the Abbey of St John at Mustair (Switzerland), the Celestine Sisters at Barletta and the Benedictine sisters at Trevi/Spoleto (Italy), the monastery of Vinnenberg and the Abbey of Maria Frieden (Germany), the international secretariat of the AIM at Vanves (France). 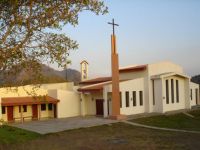 The first monastery following the rule of St Benedict in Nicaragua was founded on 20th February 2001 by seven sisters from the Cistercian monastery of Madre Cristo of Hinojo (Argentina). The monastery is located in the diocese of Juigalpa.

At first the sisters rented a house in the village of San Pedro de Lovago, about 10km from where the monastery was to be built. This was a very rich experience of contact with the local population, who received the sisters with warm friendship. Thus close links were forged with them and priests and religious of the district. The construction of the monastery began with the building of a wall surrounding the property and installation of cables for electricity. On 31st August 2002, one and a half years after their arrival, the sisters were ready to move into the guest-house while the construction of further buildings continued, the church, the library, the chapter-room, refectory and kitchen, and a little house for the bursar. They soon left the guest-house and moved into the cells.

The community makes semi-soft cheese, little known in that region, jam and caramel sweets. All these soon began to sell, at first in the neighbouring villages, then in Juilgalpa, and even – for the sweets – in some supermarkets in Managua.

The property comprises about 60 hectares and the sisters have begun re-forestation and the planting of a vegetable garden. Since the very beginning of the foundation the Eucharist has been celebrated daily. The chaplain appointed by the bishop is a priest, originally from France, who has had long experience of Nicaragua. Even though the area seems to be uninhabited, many poor people join in the celebration of Mass on Sundays, sometimes after a long walk of several hours. There are also many children. In former times they had no Sunday Mass because the clergy is very scarce in this area and priests could come only rarely into the countryside. The population has a great devotion to Our Lady and the Blessed Sacrament, with a deep faith, despite little instruction.

On 20th February 2009 the community was elevated to the status of Simple Priory by a decision of the General Chapter of Abbesses at Assisi in 2008. At present the monastery counts 7 solemnly professed, 3 novices and 4 postulants.