We have 272 guests and no members online

On 24th February 2015 the annual meeting of BECOSA brought together the superiors of monastic communities of South Africa,
Namibia and Zimbabwe. The first day consisted of reports on the different Congregations or monasteries. We present some of the observations. 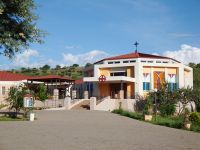 The Missionary Sisters of Tutzing in Namibia have 11 Priories in the region. They consist of 97 solemnly professed sisters, 41 in formation, of whom 24 are in temporary vows and 12 are oblates.

The Benedictine Sisters of Twasana (South Africa) have 10 Priories. They have 50 sisters in solemn vows, and four sisters in
formation, of whom 3 are in temporary vows, and one a novice. They have a school and a care centre for the local people. The community is very isolated in Zulu territory, which does not encourage new vocations.

The Benedictine Sisters of Christ the King of diocesan rights in the diocese of Polokwane (South Africa) are 15 in solemn vows, 6 sisters in formation, of whom three are in temporary vows, one novice and two postulants. Despite the presence of young people in the community, it remains fragile.

The Benedictine Sisters of Oshikuku (Namibia) have 16 communities. They are 107 sisters in solemn vows, 25 sisters in formation, of whom 16 are in temporary vows, 7 novices three postulants and some aspirants. They also have pastoral activities: schools, Kindergarten, health clinics, soup kitchens, service of the sick, scouts. The sisters work with street children for some schooling.

The Benedictine Sisters of St Alban at Elukwatini (South Africa) are united in one community of 17 sisters finally committed; two sisters are in formation, of whom one is in temporary vows. They look after a house for elderly people for the diocese; one sister teaches in a maternity school and the sisters have parish activities. 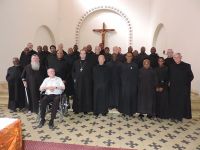 The monks of the Abbey of Inkamana (South Africa) form a community of the Congreg-ation of St Ottilien. They have 18 solemnly professed, of whom several are German, 11 brothers in formation of whom three are novices. Their activities consist of three parishes, a school with 200 boarders (boys and girls), a guest-house where both Catholics and non-Catholics are welcome. A new Prior Administrator, Dom John-Paul , was appointed in February 2015; he comes from Kenya. There is no lack of vocations. By now all the responsible posts are held by South Africans (Prior, sub-Prior, novicemaster). The community hopes to develop a farm, in order to help the poorest people in connection with its farming activities.

The monks of the Abbey of St Benedict at Polokwane (South Africa) form a community of the Congregation of Subiaco. They have 7 solemnly professed monks, 9 brothers in formation, of whom 5 are in temporary vows, one novice and three postulants. They play a part in the parish, give retreats and have a farm with sheep and poultry. They are linked to the Benedictine school adjoining the monastery, which is developing well. Relations with the diocese are centred in liturgical contributions, the monks are often consulted on the art of celebrating. Retreats are offered on Benedictine spirituality, and are attended by families. The monastery hopes to become a centre of spirituality to achieve a return to God and for giving an experience of prayer and sharing the monastic life. Young people ask for this; it is a motive for vocations and for the Christian life in general. The development of agriculture is also important.

The monks of Christ the Word of God (Zimbabwe) form a community of the English Congregation. The monastery was founded by Ampleforth. There are four monks of various nationalities. There are possible vocations and many visitors. As Pope Francis invites the creation of places of recollection for those pastorally active, the monastery would like to respond to this. The monks are alert to the difficulties of families which have difficulty in surviving and frequently emigrate, as monasteries of neighbouring countries are aware; it is important to welcome and accompany such families. The problem is how to find enough energy for the work of welcome and retreats.

The Anglican monks of Themba (South Africa) form a Benedictine community of five monks. The monastery has invested heavily in interreligious dialogue, but also in education; it leads a major conflict for justice in the heart of the school. Many of the volunteers work in this area. In the framework of hospitality there is an ever deeper search for solitude and silence. The Anglican Church seeks an increasingly deep relationship with religious life. Among the projects in hand is the construction of a separate building as a sort of hermitage for welcome and the discernment of new vocations.

Photos :
Priory of the Tutzing Sisters at Nubuamis (Namibia). They also run a maternity school there.
Community of Inkamana with Dom Jeremias Schröder, President of the Congregation of St Ottilien.
Meeting of BECOSA 2015, the group with the Abbot Primate, Dom Notker Wolf, the President of AIM, Dom Jean-Pierre Longeat and Dom Mark Butlin.