We have 227 guests and no members online

Annual Report
of the Secretary General of dim/mid

This year-end report of my activities as Secretary General of Dialogue Interreligieux Monastique/Monastic Interreligious Dialogue (DIM/MID) will be the last one I send from Japan. The monastic chapter at Saint John’s Abbey in Collegeville, Minnesota, has decided to close Trinity Benedictine Monastery, its priory in Fujimi, Japan. I was in Japan when the community moved from Tokyo to Fujimi in 1999, and I was asked to come back again in 2012. I will return to Collegeville in May and continue my work for DIM/MID from there for the remainder of my third three-year term, which ends on October 31, 2016.

Most of my work for DIM/MID continues to be administrative and editorial. A good part of my time this past year was devoted to organizing the Monastic/Muslim dialogue that took place in Assisi in October (more on that below). As administrator of the DIM/MID website and Associate Editor of our journal, Dilatato Corde, I invite contributions, correspond with authors, edit all the articles that are submitted, put them on-line, send out ‘new article alerts’ to those who have requested them, and then prepare the major articles that appear each year for publication in book form.

Perhaps the most important news of this past year is that the Economic and Social Council (ECOSOC) of the United Nations, at its coordination and management meeting in July 2014, adopted the recommendation of the Committee on Non-Governmental Organizations (NGOs) to grant special consultative status to DIM/MID. A friend of DIM/MID had recommended that we apply for this status, and the Board of Directors agreed with that recommendation.

Now, of course, we need to determine what DIM/MID can do to contribute to the work of the United Nations. I have been in touch with other organizations (primarily Catholic) who also have special consultative status. Those that are most active have a permanent office in New York, but that hardly seems possible for DIM/MID. After I return to the States in May, I plan to visit some of these offices to inquire about partnering with them in one or the other of their projects, or at least participating in programs that they sponsor. I also hope to be in contact with other religious organizations with NGO status at the UN to see what possibilities there might be for collaborating with them.

On March 30, Osservatore Romano announced that I was among the persons appointed by Pope Francis to be a Consultor of the Pontifical Council for Interreligious Dialogue. The first Secretary General of DIM/MID, Father Pierre de Béthune, served as a Consultor from 1985-2001, and Sister Bruno Colin (who died in 2006) was also a Consultor for several years while she was Coordinator of the European Commissions for Monastic Interreligious Dialogue. My service to the Council thus far has mainly consisted of reviewing and making suggestions for the greetings that the Council annually sends to different religious groups—for example the New Year’s greeting to the followers of Shinto that is now featured on the homepage of our website. I was also asked to write an article for Osservatore Romano, ‘Un’esperienza fondata su un programma di scambi spirituali. Monaci protagonisti del dialogo tra le religioni’, which appeared on July 2, 2014.

From May 29 to June 1 I took part in and gave a short presentation on DIM/MID at the Assises Pastorales of Les Voies d’Orient in Brussels. The topic of the conference was ‘Le dialogue interreligieux: Chemin de transformation intérieure’. The experience of monks and nuns who are involved in interreligious dialogue figures significantly in the final message of the conference, which treats of the nature and practice of intra-religious dialogue. The statement, in French and English, appears in the last issue of Dilatato Corde.

Following the conference I participated in the annual meeting of the European Commissions of Monastic Interreligious Dialogue. After the meetings in Brussels, I and seven other representatives of DIM/MID went to Rome for a meeting with the Secretary of the Pontifical Council for Interreligious Dialogue, Father Miguel Ángel Ayuso Guixot MCCJ, the Under-Secretary, Father Indunil J. Kodithuwakku, and five members of the PCID staff. Cardinal  Jean-Louis Tauran, President of the PCID, was planning to attend, but was prevented from doing so because his travel plans had been disrupted. The meeting was suggested to me in October, 2013, by the Under-Secretary, Father Kodithuwakku. It provided DIM/MID with a welcome opportunity to inform the PCID of its particular approach to interreligious dialogue and its activities, and to discuss how DIM/MID and PCID might collaborate more closely in the Church’s ministry of interreligious dialogue.

The printed edition of Volume III (2013) of Dilatato Corde, appeared in May. I will send the manuscript for Volume IV (2014) to the publisher in January 2015. Sales of the books have been disappointingly low, to say the least: 33 copies of volume I, 21 copies of volume II, and 8 copies of Volume III. When Dilatato Corde was launched as an on-line, multi-lingual journal in 2011, the decision was made to publish a book each year that would contain the most important articles that had appeared on-line the previous year. That decision may have to be revisited. In the meantime, I will consult with the publisher whether it might be possible to offer a discount to monasteries for both past and future volumes. If arrangements can be worked out, I would propose that a notice then be sent to all monasteries informing them of the discounted price and strongly encouraging them to purchase these volumes for their libraries.

In October, the third in a series of Monastic/Muslim dialogues sponsored by DIM/MID took place at the Monastero de San Masseo (Communità di Bose) in Assisi and at the Pontificio Instituto de Studi Arabici e Islamici (PISAI) in Rome. In Rome we also paid a visit to the Pontifical Council for Interreligious Dialogue. There are two brief reports on the gathering, one in English in the current issue of Dilatato Corde, the other in Italian on the Italian Commission’s website. Dilatato Corde also has a photo gallery. I am presently preparing the proceedings of the conference for publication by Liturgical Press in its Monastic Interreligious Dialogue series.

Thanks to having been asked to translate the keynote address that Father Nicola Mapelli, Director of the Ethnological Museum of the  Vatican Museums, gave at the 2011 Monastic Symposium at Sant’Anselmo, where I was living at the time, he invited me to become a translator for the Museum. With the approval of my monastic superiors at Collegeville, I contribute half of the honoraria I receive for this work to DIM/MID. This year I contributed a little over $7.000, an amount which includes some honoraria I received in 2013. In addition I received a €5.000 stipend from the Indonesian government for translation which I did for an exhibition of Indonesian art and artefacts conserved at the Ethnological Museum. That money was used to cover the expenses of the Monastic/Muslim dialogue referred to above.

The following activities are on my calendar for the coming year:

May 21-24
I will be part of a panel presentation on Monastic Interreligious Dialogue with Abbot James Wiseman (Saint Anselm’s Abbey, Washington DC) and the Rev. Vivian Gruenenfelder (Shasta Abbey Buddhist Monastery, California) at a conference organized by the Theology Department of Georgetown University: “Vatican II: Remembering the Future”.

May 27-31
I will participate in a Buddhist/Catholic monastic dialogue at the Abbey of Gethsemani in Kentucky. The topic of this fourth “Gethsemani Encounter,” which will take place in the centennial year of the birth of Thomas Merton, is spiritual maturation.

June 22-28
I am on the planning committee for and will participate in a ‘Dialogue and Fraternity’ event with Buddhists and Catholics from the United States to be held at the Focolare Mariapolis Center on the grounds of the papal summer residence in Castelgandolfo. The event is being sponsored by the PCID and the United States Conference of Catholic Bishops. Three days will be devoted to formal dialogue about (1) relational human suffering and its causes, (2) liberation from such suffering, and (3) the role of universal fraternity in contributing to this liberation in today’s society. On June 24, the participants will be special guests at the Wednesday papal audience and will receive a VIP tour of the Vatican. On their return to Castelgandolfo, they will visit the Basilica of Saint Paul Outside the Walls and have dinner in the adjoining restaurant. On the final day, the participating Buddhists and Catholics will break into five groups representing five major metropolitan areas of the United States (New York, Washington DC, Chicago, San Francisco, and Los Angeles) to discuss how their communities might work together in addressing social ills in their regions. Monastic Interreligious Dialogue will also be represented at this event by Sister Anne McCarthy OSB, a member of the North American MID and an at-large member of the Board of Directors of DIM/MID. 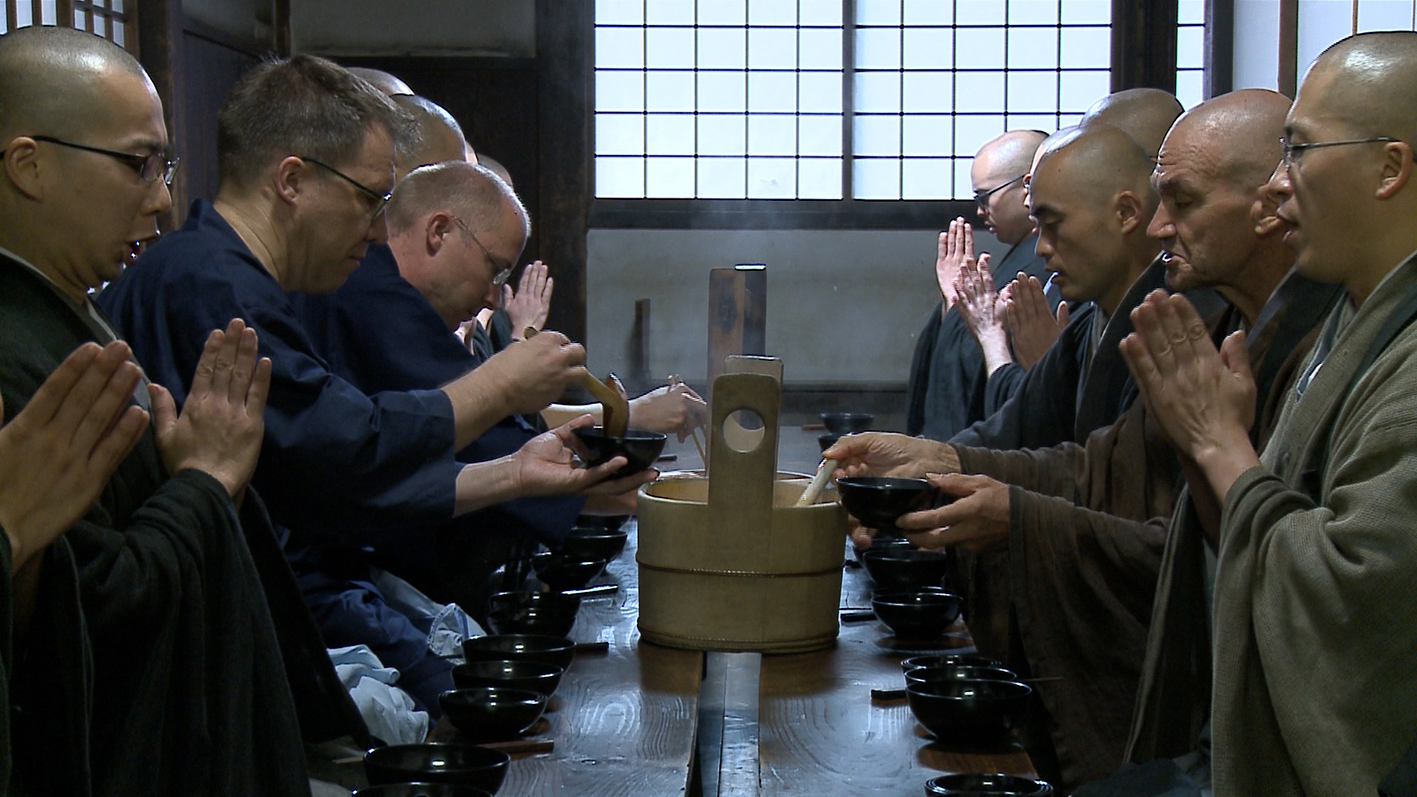 I plan to be in Paris to help with the final editing of the documentary on DIM/MID that is being produced by Les Films du Large. Plans are being made to premier the documentary at Sant’Anselmo on or around October 28, the 50th anniversary of the promulgation of Nostra Aetate, and also in Paris, possibly at the Collège des Bernardins.

September 14-18
I will participate in the annual meeting of the European Commissions for Monastic Interreligious Dialogue at Abtei Königsmünster, Meschede, Germany.

October 15-20
I will attend the Parliament of the World’s Religions in Salt Lake City. I have submitted a proposal for a program on Monastic Interreligious Dialogue that would include a ‘sneak preview’ of the documentary on DIM/MID.

October 27-28
I hope to be invited to participate in the program commemorating the 50th anniversary of the promulgation of Nostra Aetate that is being organized by the PCID and the Gregorian University.

In conclusion, I would like to call attention to the supportive and encouraging words of Pope Francis regarding Monastic Interreligious Dialogue in his ‘Letter to all Consecrated People’ dated November 21, 2014:

Nor can we forget that the phenomenon of monasticism and of other expressions of religious fraternity is present in all the great religions. There are instances, some long-standing, of inter-monastic dialogue involving the Catholic Church and certain of the great religious traditions. I trust that the Year of Consecrated Life will be an opportunity to review the progress made, to make consecrated persons aware of this dialogue, and to consider what further steps can be taken towards greater mutual understanding and greater cooperation in the many common areas of service to human life.

During the coming year we will seriously consider the recommendations made, especially with regard to making consecrated persons aware of this dialogue and considering further steps to be taken.