We have 115 guests and no members online

The European DIM/MID at the Abbey of Lerins

The European DIM/MID at the Abbey of Lerins

The European DIM/MID at the Abbey of Lerins
30th September – 4th October, 2013 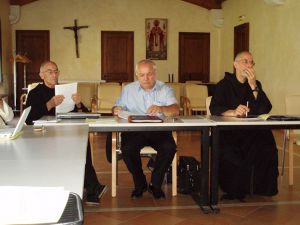 The 42nd meeting of the European co-ordinators of the DIM/MID took place in the magnificent setting of the Abbey of Our Lady of Lerins on the Isle of St-Honorat. There were twelve of us, Benedictine and Cistercian monks and nuns from several European countries (Belgium, Germany, Hungary, Scandinavia, Spain, Italy, France, England), engaged in monastic interreligious dialogue.

Br Daniel Pont, OSB, of the Abbey of En-Calcat, European co-ordinator of the DIM/MID, presided over these days of reflection. Dom William Skudlarek, OSB, of the USA, Secretary General of the DIM/MID and currently residing in a monastery in Japan, was also present.

The fraternal exchange, based on the reports of the respective Commissions, gave us the real measure of the European monasteries, the courageous work of the Commissions, but also the number of difficulties encountered: how to avoid the risk of the DIM being considered the business of one brother or sister, who dispenses the community from taking any further part? The problems of relieving the staff of the DIM/MID and the weak participation of ailing monasteries, due to the age of the communities, trouble us all. A question is how to motivate such communities, despite their lack of numbers. Less and less communities are involved. The dynamic Abbot of Lerins thinks that ‘interreligious dialogue is the most important thing in France’. Both he and his community are bound up in Cannes with the local associations such as ‘Vivre ensemble’ (‘Living together’) or the Sufi Muslims of Sheik Bentounes of the Association Alawiyya at Bars-Sur- Loup. We were reminded that interreligious dialogue is principally a matter of personal concern, but also that we must not forget that, since Vatican II, it is the explicit concern of the Church as such; hence one can say that it is an ecclesial obligation, one of the requirements of living together in society, both for monasteries and for the laity. 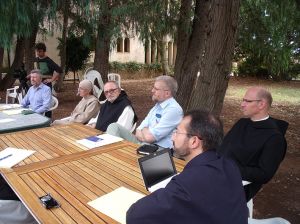 Fr Jean-Marc Aveline, a theologian and at that time Episcopal Vicar of Marseilles (subsequently ordained Auxiliary Bishop of Marseilles), president of the Institut Catholique of the Mediterranean, provided a theological formation for our dialogue during two days of fascinating study. His great experience in the city of Marseilles enabled him to build a theology on the basis of the topography itself, which was of great benefit to us monks and nuns. The title of his contribution, ‘The present conditions of arriving at an understanding of faith in monasteries’, was a proof of the serious thought he had given to our situation. He put before us a missionary itinerary, insisting on a distinction between the faith of universities and the experience of the missionary, which is primary.

Fr Peyriguère (1883-1959), hermit at El Kbab in Islamic Morocco is an example of this. Fr Aveline invited us to share Fr Peyriguère’s conception of Christ: an incarnate Christ, a Christ who recapitulates, a Christ spouse of the Church. In 1958 at Toumliline Fr Peyriguère wrote, ‘O my Christ, by your incarnation you took all humanity to yourself ! Christians and non-Christians, you carried them all in you, you lived for them, you carried them in yourself on the Cross, they all died with you on the Cross, with you they all rose again, with you they are in power.’ Since he recapitulates all things, the Christ of Fr Peyriguère can be no stranger to the life of the Muslims, the faithful of Islam. To proclaim this he relies on the encyclical Mystici Corporis of Pius XII. Relying on Pius XII, Fr Peyriguère affirms at Toumliline that ‘in all the Muslims there is a grandeur of Christ, a content of Christ, a fleshly relationship with you, my Christ’. He goes further, ‘also a dynamic of Christ. These are your brothers in the flesh, you cannot fail to be concerned about them. It is true that you give grace even outside the visible Church. All humanity belongs to Christ, and in particular the Muslims. At the same time, among non-Christians the Muslims are nearest to you, and yet, what I must admit though it crushes my heart and my head, the most distant from you.’ Only because Christ has assumed the human condition can he recapitulate the whole of humanity. 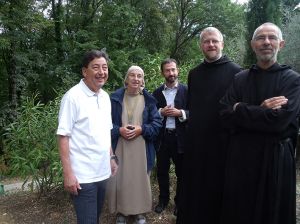 On the final day we visited Sheik Bentounes on the heights above Cannes. We were received with much care and simple fraternity, and enjoyed some hours of real dialogue with the Sheik, members of his family and his Sufi friends. He said to us, ‘Truth consists in coming into harmony despite our contradictions and in taking up the staff of a pilgrim. Spirituality is nothing other than the expression of simplicity.’ We left with our hearts full of joy as we leapt onto the last boat for the Isle of Lerins.