We have 61 guests and no members online

CIB: A visit to Brazil

CIB: A visit to Brazil

Four Years in the Making: A Visit to Brazil 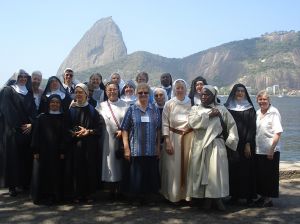 Ibelieve it was back in 2009 on a boat in the Adriatic – while the CIB Delegates visited Region 8, Croatia – that Mother Escolástica Pimentel, of the Monastery of Our Lady of Glory in Brazil, struggled to tell me in the few words of English that she knew, that she wished to invite the CIB Delegates to Brazil. The following year, we met again in Rome for the 2010 Symposium. Mother Vania Maria Miranda Toscano de Britto, of Olinda, Brazil, Substitute from Region 11, was with her. Together we were able to set the dates for the 2013 journey to Brazil. As things happened, however, Mother Escolástica would no longer be the Delegate. No stranger to the CIB, Mother Martha Lúcia Ribeiro Teixeira was elected by Region 11 to be the Delegate and, along with Mother Vania, would coordinate the September 1-17, 2013 event that would prove to be a memorable experience for all who participated.

We spent the first week at Mosteiro da Encarnação, São Paulo, Brazil, the monastery of a small group of Camaldolese Nuns. It was indeed fortunate that Mother Michela Porcellato, Region 2 Substitute was in attendance. This is the Congregation of which she is Abbess. Within walking distance up the hill is a small community of Camaldolese Monks, Mosteiro da Transfiguração. During that week, we joined the nuns and monks for the Liturgy of the Hours and Eucharist in the sisters’ new chapel – actually opened the day before we arrived. We were also pleased to attend the Sunday Eucharist at the monks’ chapel with a number of lay people from the local area. 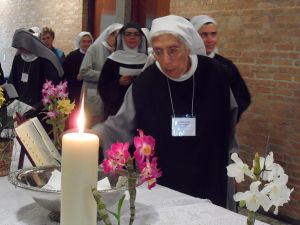 Mosteiro da Encarnação was a perfect location for our meetings as it had a comfortable conference centre to accommodate us. Three days were devoted to the business of the CIB Conference. On each of the three days of the meeting, the members of the Administrative Council prepared meaningful prayer and lectio sharing experiences, enabling us to go into depth on the themes of ‘listening’. We were welcomed to our annual meeting by the Abbot Primate. The Primate challenged us once again to get in touch with our founders. He asked us some very challenging questions: Do we still have fire in our hearts? Do we still have a vision? Where will be our next foundation? The Abbot Primate also shared with us the development of the strategic plan that is being used at Sant’Anselmo. In addition to the ordinary business of the CIB Conference, the current plans for the 2014 Symposium were reviewed, with the Delegates receiving their formal invitation for their Region indicating the number of participants who will be able to attend.

On September 5, 2013, Abbess Escolática Ottoni de Mattos welcomed us to Santa Maria Abbey in São Paulo, the first female monastery in Brazil. We were greeted by another twenty nuns and sisters from communities in Brazil, twelve of whom were abbesses/prioresses. They took the time to journey to São Paulo to join the CIB Conference Delegates in celebrating the Eucharist, Midday Prayer and a wonderful meal. A presentation was given by Sister Roberta Peluso de Oliveira on the social situation of Brazil and the challenges the communities face living their monastic life in that environment. After a shared lectio session on the day’s Gospel, each one had the opportunity to introduce her community to the others at her table through the use of pictures that each one brought: of community members, chapel, and a work or ministry in which the community is engaged. Planners were careful to place translators at each table so that all could ‘meet’ the community being presented. The day was a wonderful experience of ‘communio’ with our sisters in Brazil.

On September 7th, we joined Abbess Martha Lúcia, Delegate of Region 11, and her community at Our Lady of Peace Monastery, Itapecerica da Serra for Eucharist, a most substantial and delicious breakfast, and tours of their building, each one receiving a lovely ceramic item crafted by the sisters of the community.

The Missionary Benedictine Sisters of Tutzing at Santo Amaro College in Rio de Janeiro and at the Priory in Olinda offered us rooms in their monasteries and welcomed us for prayer, Eucharist and meals with the community. We were able to see their schools in session and were entertained with a Popular Dance Frevo by the AGS students at Olinda. The sisters invited the CIB Delegates onto the floor to learn the steps of some of the easier Brazilian folk dances. It was a delightful evening filled with food, fun and sharing.

Abbess Vera Lúcia Parreiras Horta and her community welcomed us to Mosteiro do Salvador where we stayed for two days. We were pleased to join the community in prayer, Eucharist and meals. Mother Vera Lúcia was once the Delegate to the Commission of Nuns and Sisters, later the CIB, representing Brazil. It was good to see her, to meet her community and to see what wonderful work the sisters are doing among the poor. We toured the school that is built on the sisters’ property providing poorer children with the opportunity to learn ballet and karate. The children were delightful and anxious to perform for us. Mother Vera Lúcia toured us around Salvador – a city of noticeable contrasts: the poor and the rich; favelas on one side and skyscrapers on the other. A memorable event was the celebration of the Feast of the Triumph of the Holy Cross on September 14th. Students and parents went out of their way to come for the Mass on a Saturday to meet us. At the end of the Eucharist, young boys carried a large cross in procession while young girls reverently tossed flower petals toward the cross. Following the Mass, the parents hosted a reception for us with special delicacies that they brought for the occasion. It was obvious that the people of the surrounding area love the sisters at Salvador. The people were honoured that the CIB had chosen to come to be in their location. Actually, the honour was ours. The people were so warm and welcoming and we were pleased that we had the opportunity to meet them.

Since summer was arriving in Brazil, we were able to enjoy two delightful outdoor barbeques, one with the community of the Monastery of St. John at Campos do Jordão and the other at the Virgin Monastery high up in the hills in Petropolis. In both communities we celebrated Midday Prayer or the Eucharist with the community. A small community of nuns at Monastery Monte in Olinda also welcomed us for Midday Prayer, tours and a hearty lunch.

As a testimony to the collaborative relationship between the monks, nuns, and sisters in São Paulo, Rio de Janiero, Salvador and Olinda, Brazil, four communities of monks – all named Monastery of St. Benedict – also welcomed us to their monasteries where we not only enjoyed a most festive meal, but were able to join them for Midday Prayer. They were generous with their time in giving us an extensive tour of their ancient monasteries.

Two Bishops likewise welcomed us. Archbishop of Olinda and Recife, Fernando Saburido, OSB, celebrated the Eucharist with us at the Olinda Cathedral. A church packed with attendees lent itself to a most vibrant liturgy. After Mass he took the time to share with us the challenges the Church faces in this part of Brazil. Bishop D. Gregório Paixão, OSB celebrated the Eucharist with us at the Virgin Monastery in Petropolis. He toured us through the Cathedral going out of his way to recognize scores of school children who had come to visit the cathedral.

If the communities we visited are any indication of the life and commitment of all of the communities in Brazil, I would have to say that Benedictine life is alive and well in Brazil. Of course, none of our experiences would have been possible without the hard work of Abbess Martha Lúcia, Mother Vania, Delegate and Substitute of Region 11, and their most able assistant, Sister Cristina Lavinati, who coordinated all of the details of our journey to Brazil. We were truly blessed in untold ways!