We have 129 guests and no members online

The eleventh meeting of EMLA

The eleventh meeting of EMLA

THE ELEVENTH MEETING OF EMLA 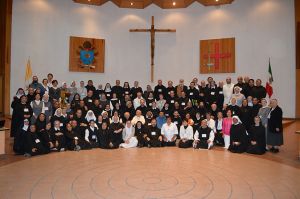 This year, from 23rd to 28th July, the 11th EMLA (Encuentro Monástico Latino Americano) was held on the outskirts of Mexico City at the retreat house of the Mexican Bishops’ Conference, near the Abbey of Tepeyac. Every four years representatives of Benedictine and Cistercian communities and Congregations from all over Latin America and the Caribbean meet to discuss topics of mutual interest and to share experiences. It is one of the key moments, not only for those living the monastic life in this part of the world, but also for the Catholic Church in this continent of hope. This year’s meeting was made particularly poignant by the recent election of the Argentinian Pope Francis and took place during his visit to Brazil for World Youth Day. Over 120 sisters, nuns and monks took part in the Encuentro, which was admirably and efficiently organised by Sr Patricia Henry, President of ABECCA (the Benedictine and Cistercian Association of the Caribbean and the Andes) and her indefatigable team of helpers from many Mexican communities. Among those present were Abbot Primate Notker Wolf, Fr William Skudlarek of MID/DIM and Abbot Paul Stonham of AIM. The accommodation was first class and the catering of a very high standard. 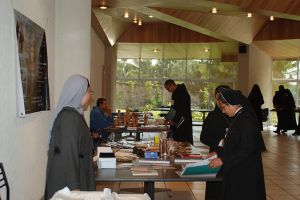 The dynamic of the meeting was varied and lively, the participants working solidly from 7am to 9pm, including time for Office and Mass, meals and short breaks for rest and recreation. Many communities brought their products for sale and there was an exhibition of the life and history of many of the monasteries and congregations. The major topics for study and discussion were: ‘An Analysis of our Latin American Reality’ by Prof. Juan Luis Hernández of Mexico, ‘Monastic Life 50 years after Vatican II’ by Prior Emanuele Bargelini, OSB Cam, representing CIMBRA (Brazilian Benedictines and Cistercians), ‘The Challenges Monastic Life faces Today’ by Prioress Stella Maris Venezia, OSCO, of Nicaragua (representing ABECCA) and ‘Dialogue between Monastic Values and those of Society Today’ by Sr Juana Inés Bertrand, OSB, from Argentina, representing SURCO (Benedictines and Cistercians of the Cono Sur). These excellent conferences, in Spanish and Portuguese, are available on various websites and can be obtained from AIM. They gave rise to scintillating group discussions and plenary sessions. 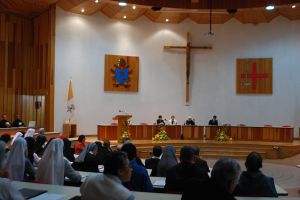 Then there were mini-presentations, talks of about 20 minutes followed by a general discussion, on the following themes: ‘The Church after Aparecida’, ‘New Spiritual Tendencies’, ‘The Context of Violence in which many Monasteries live’, ‘Creative Responses to the growing Poverty that surrounds us’ and ‘Monastic Life in the Amazon Jungle’. In addition, Fr William Skudlarek spoke on the imperative of Inter-religious Dialogue in Latin America and the Caribbean, the President of the Conference of Religious of Mexico, Sr Mercedes Casas FSpS, greeted the assembly, speaking of the importance of the monastic presence in the local Church, while Abbot Enrique Contreras spoke of the digitalized version of Cuadrenos Monásticos. The Abbot Primate spoke at length on the challenges facing monastic communities today in all parts of the world and brought us up to date on changes at Sant’Anselmo, while Abbot Vincent Bataille OSB spoke of the cause for the canonization of Blessed Columba Marmion and Sr Laura Forastieri OSCO encouraged us to support the movement to declare St Gertrude of Helfta a Doctor of the Church. On the last day Abbot Paul Stonham spoke of the history and work of AIM today and of the priority of supporting formation in all its forms. As usual, the EMLA composed a message to be sent to all sisters, nuns and monks of Latin America and the Caribbean. 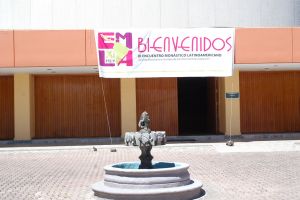 Of course, these meetings are not all work, one of the most fruitful aspects being the coming together of so many Benedictines and Cistercians and the bonds of friendship and collaboration that are forged and renewed. There was also the celebration of the Liturgy and other moments for prayer and reflection. One day was dedicated to a cultural visit of the City of Mexico together with Mass, presided over by the Nuncio, at the Basilica of Our Lady of Guadalupe, always the highlight of any visit to Mexico. On one evening there was a fantastic show of folk dancing and typical Mexican music at the Teatro San Benito within the school complex of the Abbey of Tepeyac and on the last evening the re-enactment of a typical Mexican fiesta in all its aspects from a Nativity Procession to food samplers from every corner of that remarkable country, yet more dancing and an abundance of tequila, All in all, everyone agreed that it was the best EMLA ever and the organizers are to be congratulated for its success.