We have 142 guests and no members online

Reflections on the Future of AIM

Reflections on the Future of AIM

REFLECTIONS ON THE FUTURE OF THE AIM

The AIM was founded a good fifty years ago. Since then much has changed and developed further, even the name of the AIM has twice been changed from ‘Aide à l’Implantation Monastique’ through ‘Aide Inter-Monastère’ to ‘Alliance for International Monasticism’. These changes indicate a new self-understanding. Nevertheless the abbreviation ‘AIM’ has been kept. This brings up the question what role the AIM should be, or whether it has fulfilled its purpose and become superfluous.

As the name already makes clear, the AIM was founded to stand beside new foundations, since the founding monasteries were in some instances overburdened in the matters of personnel and finance. Many young monasteries have in the meantime become older, have grown out of the status of new foundations and have celebrated their first jubilees. Some have failed to develop, others have closed again. It would be helpful if these houses could make a balance-sheet comparing their present situation to the purpose of their foundation. Why was the foundation undertaken in the first place? What is its identity? What are they trying to be, and how do they live out the conception of their identity? Where are there problems? How can they be overcome? How do the communities deal with these problems? Such questions should be asked not only at the times of Visitation. In this connection it would be interesting to know, how were crises overcome in the past? A further question would be, what is the fire that drives our communities? What esteem do they enjoy in the local Church and in the community of their own country?

The main aim of the AIM is the furtherance of formation in our monasteries. In many places qualified educators are lacking. So there is a question not only of the first formation in the noviciate and the juniorate, but also of the continuing formation of our brothers and sisters, so that they do not grow weary on the way or even leave the community but that they continue to mature and become ever more Christlike. The Formators’ Course has grown out of this concern and has helped many communities. 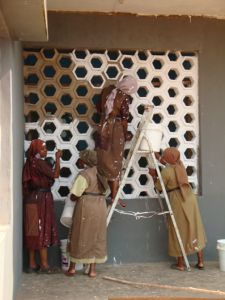 An area of formation which has long been neglected is technical and professional formation. Even the statutes of the AIM concentrate uniquely on intellectual and spiritual formation. While earlier monasteries were built by their own monks, young monks today expect to be able to move into a finished monastery. Of course at first a modest dwelling will be needed, but at the same time the young lack the necessary training. We should not forget to train builders, joiners, electricians, metalworkers and construction-workers. Then the maintenance of monasteries could be done by our own hands. This would also offer a good example to the neighbourhood: monks do not only pray and study, but also work. Years ago, when I visited the Benedictine monastery of St Walburga in Eichstätt, I saw a nun standing on the scaffolding as a builder to renew the façade. We shall also need manual labourers for the upkeep of the monastery buildings, quite apart from the need for husbandry, and so long as it remains on a modest scale this should be done by our own brothers and sisters. Agriculture and gardens produce the food that we need. Manual workers of our own save money. No work should be too dirty or too humble for us, so that we slough it off on employees. In our western tradition we have raised manual labour to its proper dignity.

In number 6 of the Statutes it is indicated that the AIM ‘helps to discover better the sense of monastic life and underlines its originality in different cultures’. A notable achievement in the field of inculturation of monastic life is the adoption of the Kora for church music in West Africa and the adoption of local traditions in the liturgy. But we must still ask ourselves the question whether our young monasteries do not still breathe the culture of the monastery of their foundation. I think this opens out a wide field: how we deal with the authority of the abbot, the obedience of the monks, poverty as community of goods, relationships with families, but also community with members of different cultural backgrounds. The Rule of St Benedict has given us guidelines for these matters.

I have often been asked what we Europeans can learn from other cultures. We might think of the emphasis on the value of life and the family in Africa. Pope Francis comes from a culture of poverty. He is leading us back to gospel values, to simplicity, to gospel poverty and solidarity. He questions the current Western culture of the present moment, the pre-eminence of money, of consumerism and efficiency. This goes deeper than liturgical alterations.

According to its Statutes the AIM is also a ‘centre of communication and co-ordination of possible new foundations’ (no 1). This will long remain the task of the AIM. Again and again requests come from bishops about monastic foundations in their local Churches. The AIM does not interfere in the situations of monasteries and Congregations. But the AIM can nevertheless reflect where there might be opportunity for a foundation and forward requests to superiors. 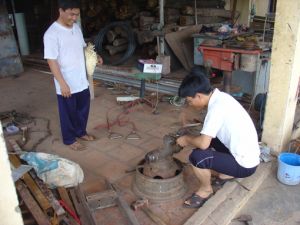 Through mutual exchange monasteries can also learn to survive the present financial crisis. The AIM can encourage this by sharing the experience of other monasteries. This occurs especially through the Bulletin. Help in development can also include shared reflection on whether monasteries can become financially independent.

In the AIM, but also in the DIM and ICBE, we are glad to have experienced how valuable the partnership of Benedictines can be with the two Cistercian Orders also based on the Rule of St Benedict. Perhaps even more working together will result from this. We have already learnt that although we have grown up separately, we turn back more and more to the basic values of Benedictine monachism. The Encuentro Monastico Latinoamericano (EMLA) is just such an example. 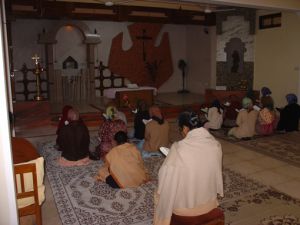 One more thought: at the meetings of the Council of the AIM the question has often been put whether it is not too exclusively European, and whether sisters and brothers from other regions of the world should be invited to become members. No solution has yet been reached. However, I would consider it more important that more regional groups of the AIM should be formed, and that the existing groups should take on more responsibility for their own regions. This occurs to some extent in the formation of novices, juniors and continuing formation. Also in the exchange of economic possibilities, to which I have already referred, new perspectives could be opened up for otherwise isolated monasteries.

After 50 years and the growth of earlier foundations, the AIM has in no way outlived its usefulness. Its contributions continue, though in a new way. The goals remain the same and it will be the task of the new President, Abbot Emeritus Jean-Pierre Longeat, and his Council to find new ways of fulfilling them. On this occasion I would like to thank the previous President, Dom Martin Neyt, and the General Secretary, Sr Gisela Happ and their assistants for all their commitment. The AIM has won for itself a worldwide reputation. Thanks for this go to the previous General Secretary and the many helpers and benefactors. Without their generous contribution many monasteries would not have made such progress.

We continue on our way. The Church and the world need monasteries as places for the praise of God, for reflection and for encounter. Monastic communities live not for themselves alone, but share their life with their locality. They give and receive. This is how we fulfil our service in all humility. I wish the new President much imagination and a fortunate hand with God’s blessing.