We have 226 guests and no members online

At the time of the celebration of the Jubilee at the Abbey of St Martin at Ligugé four conferences gave the tone, presenting the vision and the activity of the AIM for monastic communities in Latin America, Africa and Asia. In the first paper Monsignor Albert Rouet, emeritus Archbishop of Poitiers, situated the place of monasteries in the life of a local Church. His reflections as a whole give an orientation for the present and future of monasticism by showing the slow and progressive incarnation of the Gospel in the most varied cultures. These cultures thereby acquire a new dimension, transforming secular cultural traditions by bringing to them the new dimension of the Gospel through the prayer and work of monastic communities.

Before recalling some fundamental aspects at the source of these changes I would like in the name of the AIM to speak with deep emotion and heartfelt thanks of the memory of Dom Marie-Bernard de Soos, who has died at the Abbey of En-Calcat at the age of 88. His funeral was quiet, marked by emotion and respect, inspired by faith, love, hope and the recognition of this great monk, founder of the Abbey of Dzogbégan in Togo, Secretary General of the AIM for 15 years, in charge of the oblates of his abbey till his last breath. ‘Open up, eternal gates, and let the King of glory enter in’, cries the psalmist. May this good and faithful servant enter into the joy of his Master, for he consecrated his life to getting to know Him and making Him known, as his abbot describes so well in the homily re-printed in this Bulletin.

Any meeting, such as that of the golden jubilee of the AIM, includes four dimensions: in front of us, the circumstances which led to this meeting; on the right, the faces we see, those of our sisters and brothers whom we meet; on the left springs up the word of welcome, of discovery of other persons, the overcoming of presumptions and misunderstandings of different languages and customs, a true and sincere communication; finally, behind us, unfolds the future. So we go our separate ways, enriched by what we have experienced, seen and heard, to the unknown future of the days to come. 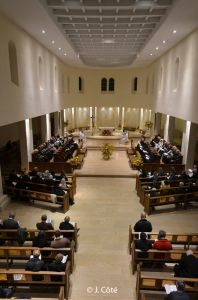 The circumstances of this meeting began at the Abbey of Ligugé as early as 1961. Fifty years later Abbot Jean-Pierre Longeat, OSB, and his community gave us an unforgettable welcome, with liturgical celebrations, concerts, candlelit meals served in the cloister. But the essence remained invisible. The evocation of recent monastic history 1961-2011 linked the past to these emotional moments, in the presence of many of the actors who had lived through them. The film ‘Si loin, si proche’ reflected the diversity of several communities, examples of this monastic presence. A volume now in the press will soon present the witness of many witnesses to this story and to the work achieved by the AIM. We got to know new faces.

Such faces opened to us France, Europe, the United States, the continents of Latin America, Africa, Asia. Our looks were fixed on the mystery of the love between Christ and his own flesh, his Body (Ephesians 5.28- 29), as Mgr Rouet stressed with regard to the place of monasticism in the Church. His vision, symbolized by ‘The Cathedral of Rodin’ opened up a space between them, that of a God who possesses nothing, but whom none can encompass. May our eyes be more and more open to this mystery which gives such value to beings and things, as the Benedictine Rule also invites.

On the right the faces we recognize, on the left the word. It has opened up many avenues, many encounters, many structures. The AIM very often supports the emergence of regional, national and international associations. These bring together monks and nuns of all the monastic orders descended from St Benedict. Here, in the melting-pot of lived experiences, of new discernment and new links, is the place where monasticism often finds a new energy to continue the work it has begun. The paper of Mother Irene Dabalus, OSB, puts the accent on this appeal to maintain the impetus of the AIM, and through it, in monastic communities of all continents, so that zeal for innovation (relative to climate, justice, economic crises) and resistance to forces of opposition may triumph over any resistance it meets. For Africa Dom Boniface Tiguila, OSB, develops the way of giving and receiving. Here are two spiritualities which should be more developed and deepened. Abbot Guillermo Arboleda, OSB, throws light on the development of monasteries in Latin America yesterday, today and tomorrow. This is a wonderful series of encounters, clarifications and communion under the action of the Holy Spirit: the situation of increasing poverty and scandalous social inequality is a strong hindrance to the life of communities, whether they are urban or not. He mentions a number of demands of the Spirit made on communities at the last meeting of EMLA, which form a programme for life. In its own way the discrete presence of the AIM accompanies and strengthens the journey of these communities.

In this issue we present also the first part of a fine article of Sister Lisa Cremaschi of the community of Bose in Italy, who illustrates the importance of spiritual paternity in ancient monasticism. This aspect, still important today, accords well with the testimonies of fraternal life in Vietnam, the Ivory Coast and Angola.

The future is opening on such perspectives, directed towards the final coming of Christ, in accordance with the lovely formula of Serapion of Thmuis, ‘You who live together are already grasping the fulfilment of your purposes.’