We have 42 guests and no members online

Experience of formation as the transmission of Life

In Japan there is the saying: “children are raised by seeing the backs of their parents.” I believe that other Asian countries as well share the same way of thinking. This proverb implies that “forming a person is not something done according to a theory, but according to a model. A person looks at the model, studies it, accepts it, and by imitating the model he comes to life and develops.” This is an expression of a certain set of values. I will use this traditional view of education in Asia as a foundation to share my personal experience of “transmitting life.”

I believe you will all remember that on March 11 at 2:46pm a tremendous earthquake of at least 9.0 magnitude hit the eastern region of Japan, that is to say, an area including Hokkaido which covers half of the eastern part of Japan. Following this earthquake a huge tsunami carrying waves of 15 meters high slammed into the costal area. The tsunami reached the Fukushima nuclear power plant located in that area and in an instant the buildings and equipment were destroyed, enveloping not only Japan but the rest of the world in a nuclear alarm. Because Japan is an earthquake prone country reasonable precautions are in place, but this time, the scale of the earthquake and the height of the tsunami waves were far beyond any calculations. In one moment the tsunami destroyed coastal towns exceeding the highest probable estimates of 10 meter waves and a seawall of 2000 meters. At that moment we also felt the tremors of a big earthquake 3 times in our monastery. I turned on the switch to an emergency radio and listened to the “breaking news” of the earthquake. The radio repeatedly announced, “A big earthquake has struck, within10 minutes there will be a giant tsunami; escape to high ground as quickly as possible.” You all know what happened immediately after that. My talk on “protecting and transmitting life” will be a modest sharing on what I felt and what I learned during the course of that time when Japan was particularly desperate to “protect life and to transmit life.”

Actually, when first I heard about the theme of this General Chapter, my simple question was, “What is this life that we transmit?” Now, I would answer in this way. The life that we pass on is “the life of Christ.” Beyond our limitations, weakness and misery, the pure grace of God dwells within us, i.e. the deathless and imperishable life of a child of God. It is the life of God dwelling within the body of clay of the human person made in the image of God, and this is the life that we protect, nurture and pass on.

The following are the 4 conditions I have experienced for “protecting life.” 1st To teach, to instruct, to command. 2nd To listen, to receive, to follow, and to act. The 3rd is to join both of these conditions together, so that finally mutual “trust” is present. Trust is an important element, because if there is distrust, doubt, hesitation or rejection between the two parties, “the bond of love” will be extinguished. And this means the possibility of death. In the case of the tsunami, it hit shore just a few minutes after the evacuation warning. It came surging in, not only once but several times. Instantaneous instructions and prompt obedience were the conditions for survival. In previous disasters in Japan, at the same time that an earthquake occurs there is continuous 24 hour radio and TV coverage in order to convey necessary information. For example, “where and on what scale have the aftershocks occurred. Is there a possibility of a tsunami coming or not? If so, after how many minutes would it come? How high would the tsunami waves be? What do we have to do now, what should we not do, what action must we take, etc?” is constantly broadcast. The survival of those listening to this information depends on whether or not they follow these instructions. On the other hand, we demand from those who provide the information, precise and accurate information and instructions on the necessary action to take. It goes without saying that for these information broadcasts a lot of prerequisite knowledge, experience, definite material, and accurate judgment are requited.

Nurturing Life
This is personal, but I remember a conversation I had with my father when I was young. It was a conversation about the written Japanese character for “parent.”

Now Dede, (Dede is my nickname) The Japanese character for parent is made up of three parts, “tree,” “stand” and “see.” So a Japanese parent must stand up on a tree, and watch his children from above, he must teach them the right way to go and show them what must be done. And if there is danger, he has to jump down to save you.

Life is nurtured in the soil of love. Life, I think, is when someone gives you look of love, to know that there is somebody watching over you always, and to grow up by accepting to follow that person. The meaning of the Japanese character for “life” is what God gives to those who pray to Him and are waiting for Him. “To nurture life” means to search for God’s will, and to repeatedly listen to Him and follow His will. 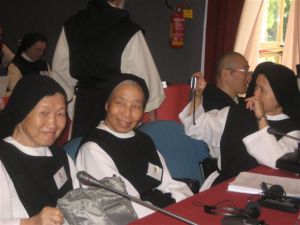 During the last disaster I learned there is nothing that can destroy the truth that man has been created in the image of God, and as such, is protected by the hand of God. It was an opportunity for me once again to reaffirm the pure grace of God. As the series of events of Japan’s disaster unfolded I realized that the excellence of human beings is something rooted in our very nature. From the day of the disaster people from around the world stood close to us in this tragedy. Especially in Japan, every one surrounded the victims fulfilling their role with the utmost energy, supporting and helping one another. It was especially a pleasant surprise to see the response from the heart of the youth. In the midst of a harsh life under extraordinary circumstances, we saw the effort to conserve water and electricity voluntarily, the acceptance of shortages, being patient with inconvenience, drawing near to the victims in heart and prayer, and the good intention to find out what one could to. On the other hand, children seeing and hearing this trend in society received it, imitated it, and so began groping to find their own way of life. Japan’s tragedy this time, 3 major disasters occurring simultaneously, earthquake, tsunami, and danger at the nuclear power plant was, in a sense an event shaking the foundations of human existence. The experience of immeasurable fear, profound grief, unfathomed anxiety was an experience of the smallness and powerlessness of human beings. However, what we experienced during that passage of time was that “lurking within this tiny, weak, miserable humanity there comes gushing forth an immeasurable power.” That is to say, we reaffirmed the latent energy within in the redeemed person, however distorted by sin: the solemn presence of God’s image, the supernatural power inherent in a child of God is released. I think it is this conviction that we are to transmit.

Life, how to live one’s life, is passed on by repeatedly looking at and imitating. In this sense, the transmission of our particular way of life, depends on how each one of us, called to a hidden monastic life, sincerely lives our own life. I believe that the transmission of life to the subsequent generations happens by their wanting to live by repeatedly looking at studying, receiving and imitating.