We have 186 guests and no members online

Conference of Monastic Communities of the Southern Cone

Conference of Monastic Communities of the Southern Cone

A FRUIT OF THE COUNCIL 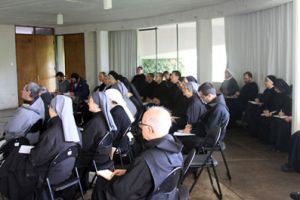 The ‘Conference of Monastic Communities of the Southern Cone’, whose logo is ‘Surco’, is an organization of Benedictine, Cistercian and Trappist monasteries, both male and female, from the zone of Latin America normally referred to as the ‘southern cone’ (Argentina, Chile, Uruguay and Paraguay) Its principal purpose is co-operation in various forms between the monasteries which follow the Rule of St Benedict. The main manifestations of this spiritual alliance are the regular publication of the periodical Cuadernos monasticas without interruption since the year 1966, the arrangement of special retreats for superiors, the annual organization of days for formation and study for both monks and nuns, and an editorial entitled ‘Ecuam’ which promotes publications on monastic themes. The organization also maintains a website under the name www.Surco.org, on which further details may be accessed. At present SURCO links together 26 monasteries, 13 of men and 13 of women, of which 21 are Benedictine, 5 Cistercian and Trappist.

This intermonastic spiritual alliance, whose coherence and usefulness have been proven for several decades, was a fruit of Vatican II. The exchanges at the Council were followed in all the monasteries with keen interest and determination in order to harvest the fruits of its magisterial pronouncements. By contrast with Brasil, which as early as 1582 had experienced a monastic foundation with many offshoots, the Spanish American nations received their first monastic foundation as recently as 1899, with the establishment at Entrerrios in Argentina of the present Abbey of the Son of God. As for Trappist foundations, these were initiated only in 1958, Azul being the first. Religious life based on the Rule of St Benedict in the countries of the southern cone nevertheless lacked the deep-rootedness which characterized above all the Franciscan, Dominican, Augustinian, Passionist and Jesuit orders and other more modern Congregations.

This built-in weakness of the Benedictine monasteries was the result of their belonging until the time of the Council to various European or American mother-houses with their respective General Chapters, canonical visitations and various regulations, which kept them dependent on considerably distant hierarchical authorities, and consequently separate from one another. In the optimistic climate of renewal and a new era which suffused the Council, a desire, vague at first, came to be felt in several monasteries to come closer to one another. Especially the decree Perfectae Caritatis produced a strong echo in the communities, and its paragraph 22 came to be seen as a direct invitation to seek a union or federation between far-flung communities. Perfectae Caritatis 22 concretely declared, ‘Autonomous institutes and monasteries, if they belong in some way to the same religious family, should promote federations among themselves when opportune and with the approval of the Holy See.’ 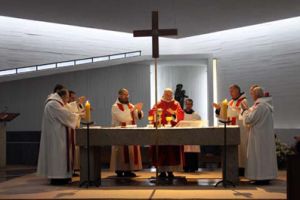 Although the conciliar invitation was clear and the advantages of a quest for unity were evident, very soon adverse factors made themselves felt. Apart from the inevitable suspicions, derived from different spiritual formation and styles of life, as well as certain prejudices and fears, it was a historical fact that congregations, federations and unions had never come into being without a thrusting centre, for example the monastery of Tabenisi. Such was the case of the Pachomian federations in ancient Egypt, Cluny and Citeaux in the Middle Ages, or the abbeys of Solesmnes, Beuron, Subiaco and St Ottilien at the time of the monastic revival in the XIXth century. In the case of the Southern Cone after the Council there existed neither a thrusting centre nor an outstanding personality capable of moving souls. We described this situation in the study published in the periodical Cuadernos monasticos in 1980, under the title ‘The implanting of Benedictine and Cistercian monasticism in the Southern Cone’.(1) There it was stated, ‘In the southern cone the process of integration of the monasteries did not follow historic patterns of the past, but rather resulted from a gradual and mutual drawing together, from making contact at times cautiously and reticently, inspired by a sort of patient monastic ecumenism, without any dynamic personalities.’ 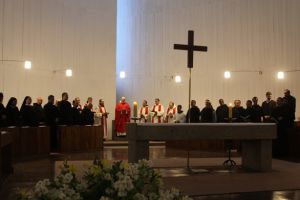 Initially the most important factor weighing against the grouping of Surco was the vagueness of the idea and the insufficient definition of the goal to be attained. It was first necessary to establish a legal framework, for which it was planned to ask the AIM to help. In any case, the first initiative started from a very marginal event: a few months after the end of the Council, the Prior of the monastery of Christ the King in Siambon, Tucuman, Argentina, P. Santiago Veronesis, OSB, proposed to the superiors of the monasteries of the southern cone, both Benedictine and Trappist, both monks and nuns, a meeting to study together the new paths which the Council was opening for monastic life, and so prepare themselves for the Congress of Benedictine Abbots which was scheduled at Rome, and the General Chapter of the Trappist Order. This historic event took place in the spacious buildings of the monastery of Los Toldos, 3-5th March, 1966. It was attended by eight Benedictine superiors, together with Dom Agustin Roberts, Prior of the Trappist house of Azul, Mother Abbess Mectildis Santangelo of St Scholastica and her Prioress, Mother Candida Maria Cymbalista.(2)

For the future of these postconciliar monastic meetings the presence, from the first meeting onwards, of both Prior Agustin Roberts and Mother Mectildis were decisive. Dom Roberts assured once and for all the collaboration between Benedictines and Trappists, one of the finest characteristics of Surco. In other parts of the world the same strength has been achieved only in Africa and Spain. On the one hand, the writings of Thomas Merton and, at a more popular level, the novels of P. Raymond on a monastic theme, had facilitated a growing appreciation by Benedictines for the Trappist way of life, and on the other hand the writings of Abbot Columba Marmion had also been read in Trappist houses. In addition, the fact that the Benedictines of the southern cone run neither parishes nor large colleges (as is the case in other latitudes) means that the Trappists feel themselves closer to them. The mutual sympathy between the black and white monks has continued to grow in the course of the years. The continued presence at the intermonastic meetings of the abbess and nuns of the largest female monastery of the southern cone, the Abbey of St Scholastica, which at that time counted about eighty nuns, gave weight and continuity to a union of smaller monasteries and ephemeral foundations which were often threatened by critical situations. 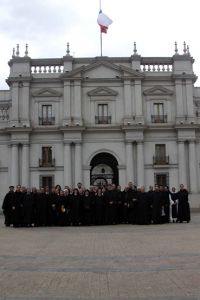 At the first meeting at Los Toldos the idea matured of appealing to the AIM to help structure collaboration between the monasteries. At a second meeting, held at the monastery of Siambon 20-27th June, 1967, P. Paulus Gordan, then Secretary General of the AIM, took part, and Abbot de Floris presided. Since the very nature of the AIM ruled out the initial idea of integrating itself into that institution, P Gordon followed up with the plan to form a Conference of Monastic Superiors of the Southern Cone.(3) The Conference elected P. Ignacio Bruni, Prior-Administrator of the Abbey of the Son of God, as first president, and he immediatly took on the charge of the periodical Cuadernos monasticos. Future meetings and conferences for study and formation were projected as a second task. The decisions then taken have held, with recognized good results, till the present day. A significant change to the title of the Conference occurred at the fourth meeting, held at the Benedictine monastery of Las Condes in November 1969. Since the meeting included not only superiors but also delegates of the communities, it was decided that henceforth the name would be ‘Conference of Monastic Communities of the Southern Cone’.(4) The slogan ‘Surco’ was conceived later under the presidency of Dom Martin de Elizalde, OSB. Its advantage was that, besides including the syllables ‘Co’ for Conference and ‘Sur’ for the Southern Cone, it formed a new, more symbolic name, equivalent to the English word ‘furrow’. 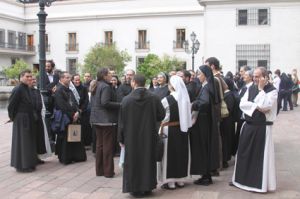 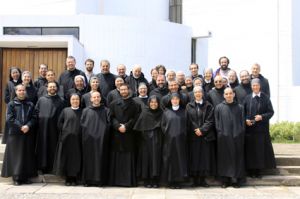