We have 66 guests and no members online

Meeting of contemplative Communities
of Madagascar and the Indian Ocean

Our assembly took place from 7th to 14th May, hosted by the Cistercian sisters of Ampibanjinana, Fianarantsoa. The theme of the session, animated by Fr Louis-Martin Rakotoarilala, Assumptionist and Doctor in Canon Law, was ‘Study of Vultum Dei Quaerere and Cor Orans, with a view to the elaboration of our statutes for presentation for the approval of the Holy See’.
Present were

Some communities, including those of Reunion and Mauritius, were unable to come this year.

On 8th May, 10th afternoon, 11th and 12th May we listened to Fr Louis-Martin explaining to us and commenting various passages of the Apostolic Constitution Vultum Dei Quaerere and especially its Instruction for application, Cor Orans, on feminine contemplative life, published 1st April, 2018. He clarified a number of canonical terms, helping us to understand the document which has the force of law for our contemplative monasteries. We read all the numbers of Cor Orans which define the different structures of communion between monasteries (federation, association, congregation and conference) which Cor Orans puts forward, following Vultum Dei Quaerere. We took note that our inter-monastic association has existed at Madagascar since 2008, and is provided for in the document no. 9 under the heading ‘Conference of monasteries’.

2. Elaboration of our Statutes

Before passing to the reading and amendment of the sketch of statutes edited by the Office, we re-read the whole of the letter of the Apostolic Nuncio, His Eminence Augustin Kasujja, dated 12th June, 2008, which encourages us to form this ‘Union of feminine monasteries with a religious assistant elected by the members’ and indicates to us the documents to send to the Congregation for Institutes of the Consecrated Life and Societies of Apostolic Life to set up such a Union, notably the deliberations of the chapters of the monasteries wishing to become part of the Union, and a copy of the statutes of the Union. At the end of the session a revised version of the provisional statutes was distributed to all the participants and to the Assistants of our association, now under the name ‘Conference of monasteries of the Indian Ocean’. These statutes must be submitted to the conventual chapters of each of our monasteries, and their acceptance must be the object of a vote of each chapter. The result of these votes must be sent to the President so that they should reach the Holy See with the statutes for approval. The examination of these statutes by the communities will perhaps raise requests for amendments. In that case we will study them at our next meeting in 2020. The statutes will not be sent to the Holy See until all the communities have given their opinion. The elaboration and amendments of the statutes raise numerous questions: we attempted to determine which monasteries could keep to them, and the rights and obligations which this would entail. We were attentive to the question of leaving the enclosure, multiplied by the demands of Cor Orans, which provoked some hesitations on the part of some of us, with the underlying question: will our Conference of monasteries of the Indian Ocean lose its relevance the moment we put in place the federations for which Cor Orans is asking?

Articles 1, 2, 4 and 7 are intended to answer these questions: the purpose of our Conference is to enhance the contemplative life among the monasteries of the region and to favour collaboration between us. Contemplative life is rich in different charisms, and the formation which we receive together helps us to remain faithful to our call and to our mutual support. We are not numerous in a vast area of young Churches. Most of our communities are still young, and as prioresses we feel strongly the need of formation and mutual help. Our belonging to the Conference is also a witness to our unity in the Church. Article 2 details the services which the Conference gives to its monastic members.

In Article 7 we underline the need for the constituent communitiesto take part in the meeting of the superiors, at least by sending a delegate if the superior herself cannot attend, in order to preserve a living link with the Conference. However we are aware that the monasteries of the islands of the Indian Ocean, given the distance which separates them from Madagascar and the financial impossibility of the Madagascan communities travelling to the islands, will not have the possibility of attending all the meetings and formation. This is why, in Article 7, we open the possibility of delegating a nun resident in Madagascar to represent them if they cannot attend. 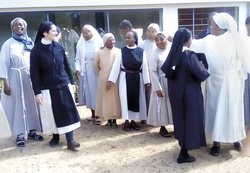 In the exchanges on the rights and duties of members of the Conference it seemed to us important that the assembly of superiors should lay down the participation of communities in the other activities proposed by the Conference. The formations proposed to communities are facultative, but the presence (or participation) of all the members at the assembly is absolutely necessary for the effective working of the Conference. At Article 22 we mentioned the Father Assistants of the Conference as being the right of superiors of the Benedictines of Mahitsy and the Cistercians of Maromby, which have accompanied our association from its very first meetings. Being themselves contemplative monks, it seems to us that they are the most apt to fulfil this function. We would like to express our thanks to Fr Louis-Martin, who has put his skill as a canonist at the service of our Conference to complete this work of revision of the statutes.

3. Exchanges on different subjects and prospects for future years

We shared our hopes for the formation of superiors in the coming years. It seems to us important to continue the work on Cor Orans, since many of the points had not been discussed, namely foundations, canonical erection, formation and means of communication. We asked Fr Louis-Martin to come back next year to continue to read with us Cor Orans and also to help us in the editing of regulations interior to our Conference (the Office will edit a sketch to be amended at the assembly). In addition, if the communities propose other amendments to the statutes we will discuss them together. Our next meeting will occur from 27th April till Monday 4th May, 2020. We shall again be at Fianarantsoa, to facilitate the attendance of Fr Louis-Martin.

For the sake of strengthening the communion between us, between the assemblies, here are some proposals:

- At the end of the year, for example at the renewal of vows, each community could communicate to Sister Agnes the sessions or conferences they have had during the year, preferably with the names of the speakers, in order to give ideas to the others. In January Sister Agnes will pass on the information to all the communities.

- In the same way, when a community experiences an important event, good or bad, it should communicate this to Sister Agnes, who will pass it on to each of the communities.

- There are sometimes talents in our communities which could be shared. Could we envisage an exchange on any subject, such as the chant? This would mean one of our sisters spending a few days in another community.

- We could envisage a formation for our young solemnly professed in 2021 or 2022. Several themes were suggested: consecration, perseverance, dealing with crises, liberty and discernment in the use of our means of communication, the importance of the interior life.

- Mother Marie-Jeanne of Joffreville proposed envisaging a session for superiors or for the young at Joffreville. This would also be an occasion for organising a day of witness with the Christians of the diocese about the contemplative life, which is not well understood in this barely Christianised part of the North. Mother Odette, of the Carmel of Morondava, indicated that her situation is similar; she would like to invite us also. We realise the usefulness of supporting communities by our presence, but the distance and the travel costs must also be considered. We realise that Mother Marie-Jeanne and Mother Odette cover great distances to join us each year.

All the participants warmly expressed their thanks to the AIM which helps us to cover the costs of this assembly and also that of the formation-session which will be held at Maromby 19-26 September with Sister Marie-Florence, PFM, on the theme of accompaniment (19-22 Sept) then Fr Georges, SJ, on the theme of discernment (23-26 Sept). About 40 people have already signed up.

4. Invitation to a meeting of contemplatives with Pope Francis on 7th September

We had much discussion during the assembly on how to respond to the invitation of the Bishops’ Conference of Madagascar for a meeting with the Holy Father at the Carmel of Ampasanimalo at Tananarive in the morning of 7th September. We think that there will be 130 nuns and 7 postulants who could come, if they could manage to be with us. The meeting would include a welcome by Mother Maddalena, prioress of the Carmel, an exhortation by the Pope and the office of midday prayer with the Holy Father. The liturgy has already been prepared and approved by the Holy See; we will arrive earlier in the morning and practise together. The offering of a present is against protocol, but nevertheless we have made a charge of 7,000ar for each community and have asked our sisters of the Carmel of Tuléar to make an embroidery (a map of Madagascar with the names of each community). The sisters of Ambositra will prepare a bamboo card which we will all sign on the spot. We can certainly give this present to the Holy Father’s Secretary.

Thanks to all and each for their active participation at this meeting of formation.