We have 87 guests and no members online

A journey to Chad

A journey to Chad 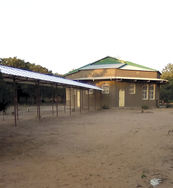 In the context of journeys of the international team of the AIM I was invited to spend some days in Chad at the community of St Agatha of Lolo, the first and only monastery of our Benedictine family in Chad. For some time the community has been feeling very isolated in the country and has wanted a fraternal visit. Ever since its foundation the AIM has done much to support projects presented by the monastery, and the time has come to show even more concretely our fraternal presence among these courageous sisters.

I flew with Royal Air Maroc, plunging into the Arab world already in Paris, with an increase at Casablanca, a splendid international airport. One must reckon, apart from the flight Paris-N’Djamena, ten hours in a bus to cover the 475 km from N’Djamena to Moundou, then 11km on to Lolo. It is reckoned not in kilometres but in hours of travel, given the state of the road (good around the capital of Chad, very good in the surroundings of Moundou - the second city of the country – and atrocious in some places in between). The interest of the bus-journey has many sides: a plunge into the local population and a visit to the country. The seats are comfortable and allow one to rest, and one can watch a good variety on the shared screen, in French or Arabic (the second official language of Chad) and even sub-titled Chinese films. The plane landed at N’Djamena on time, but one of my cases was missing, which involved luggage-negotiation as well as the formalities for entry into the country. During this process I kept thinking of Sister Denise who had to wait at the airport for more than two hours.

The monastery of St Agatha was founded in 2004 by the Congolese sisters of Lubumbashi (Congregation Queen of Apostles). Everything is young, and I had a lot to learn. A wonderful book in the library of the sisters guided me, Origins of the Catholic Church in Chad, diocese of Moundou, Diary of a Missionary, by Marie-André Pont, a Capuchin. The Church in Chad is not yet a hundred years old. The eight dioceses of the country are served by 131 diocesan priests and 111 religious priests and 375 religious sisters. St Agatha is the pride of the Diocese of Moundou, as a diocesan priest in the town told me.

Before I left, Dom Jean-Pierre and I had been able to meet in Paris a missionary, P. Michel Guimbaud, a French Capuchin who had arrived in Chad in 1957, three years before its independence. He shared with us his missionary zeal and his pride in the people of Chad. The Capuchins celebrate the Eucharist at St Agatha three times a week and help the sisters in many ways, notably serving as postmen for mail and various information for the sisters. During my bus journey I had noticed some trucks full of containers coming from Douala and Yaoundé, bound for the Cameroons. The country is enclosed, with no access to the sea, with a surface area two-and-a-half times that of France. The northern part is a desert. In addition to the climactic conditions the countryside is politically conflictual: the areas controlled by Boko Haram are not far away. Studying the recent history of Chad, especially during the dictatorship of Hissène Habré (1982-1990) the people suffered a great deal. On 30th May 2016 this dictator was condemned to prison for life for crimes against humanity, torture and war-crimes. The occurrence of the trial, twenty-five years after his fall and flight to Senegal, was due entirely to the tenacity and perseverance of his victims.

As my case had been lost, I experienced an evangelical arrival, as in Luke 10, “Take no purse with you, no bag, no sandals. In whatever house you enter, say, ‘Peace be to this house! Remain there, eating and drinking whatever they give you.’” The sisters put me in a lovely cell, with everything necessary for a night and the whole week. The mosquitoes were kind, and the mosquito-net was enough to keep them away – my aerosol had of course been in my case.

The monastery is well built and spacious. The fine church had been dedicated on 29th June 2018. The agreeable and well-ventilated kitchen serves also as a dining-room. The sisters have just built ten extra rooms to enlarge the capacity of their guest-house, and indeed many people come to recharge there. They appreciate the surroundings and the community. During my stay a group of religious was on retreat, animated by a priest from Central Africa. 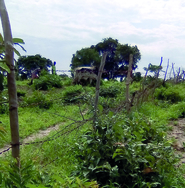 I was touched by the seriousness of the religious life of these sisters in conditions of considerable discomfort. They are hard-pressed for time: Vigils at 04.30, Compline at 20.00, a short siesta after lunch. Sister Denise the superior, Sister Giselle the guestmistress, Sister Myriam the director of the school are Congolese from Lubumbashi. The first Chad professed sister, Sister Priscilla, is currently at Lubumbashi for formation. The active members of the community will soon be complemented by Sisters Eulalie and Philomena. The community is welcoming, and a sister from Babété in the nearby Congo is there for several weeks of rest. I had the pleasure of meeting Sister Myriam again, having met her three years ago at a session of formators. She has done the Ananias Course for French-speaking formators and profited from it enormously. She is going to study the Bible at Yaoundé for three years, which is a great sacrifice for the community, generously given.

Accompanying Sister Denise in the cultivated land of the monastery I learnt that three weedings are needed before the groundnut-harvest. Unfortunately the plantation is bare over some of its area, either because there was not enough rain after planting or because a herd of cattle had broken down the fence and helped themselves. In any case, herds of 180 head of cattle come down from the North after the harvest, they clean and manure the land for the convenience of the farmers. In this case they had come down too early, and the consequences for the cultivation were disastrous.

Among the workers on the farm of the sisters the choir-members of the neighbouring parish should be mentioned, who want to buy instruments and an amplifier. Their pay is put aside so that one day they may fulfil their dreams. I noticed also women with very young children on their backs or walking bravely beside their mother. The sisters help the villagers financially, for instance, by giving them seed on credit. This year, in addition to sesame, groundnuts, millet and yams, Sister Denise is planning to plant cotton. She has done some agronomic research and the soil is sandy, easy to crumble, but a strong rain can uproot the plants. The State has launched a re-forestation programme: it is forbidden to cut down trees, but charcoal is needed for the cooking. The monastery has a machine for crushing groundnuts. During my stay three workers kept it turning for a whole day and the next morning we took the cans of oil to a client in Moundou.

The rhythm of monastic life is provided by the movements of the neighbours: out into the fields in the morning, before noon the workers are given tea, in late afternoon they come for food (flour mixed with millet and maize, gumbo-sauce, a bit of fish). Work stops at 17.00, so that everyone is at home by nightfall at 18.00.

The sisters have a small school. At first they provided all the teaching; now they have teachers, paid a standard wage. But the villagers have difficulty paying the fees and the children are withdrawn from school early. The public school also requires payment. Money is short. The water-pump put at the disposition of the villagers is waiting for its third repair, which the sisters are asking the users to pay for. The primary school has to close at the end of May, for at the beginning of June the parents withdraw their children to work in the fields. The hangar where the school takes place has been partly financed by the students of the school at Lubumbashi, a fine example of sharing.

The sisters face difficulties with a courage that compels admiration. They still have not been able to enclose their boundaries to protect their crops, or been able to count on a more trustworthy source of electricity, especially to supply their refrigerator. Access to the internet also seems complicated. The monastery is in a hollow, and it is necessary to get in a car and drive 1.5km to get a signal. The problem seems insoluble. Throughout my stay I found that grace is everything. I thank the community of St Agatha for its welcome and for opening my eyes to a new reality. To finish I would like to put on record that both the local bishop and the sisters and Capuchin brothers ardently long for the establishment of a monastery of men in the vicinity. Land is available. This appeal is thrown out to any who could respond!