We have 79 guests and no members online

1. The theological Basis of monastic Accompaniment

In today’s speech ‘to accompany’ signifies ‘to go with someone towards some place’. But what is this place? In our case it is the epithet ‘monastic’ which gives the answer. We would like to speak of spiritual accompaniment in the monastic life and we know very well that the only purpose of monastic life is the search for God (RB 58). The expression ‘search for God’ denotes the theologal goal of this vocation. On the basis of this conviction I have set out to help our young people to recognise the role of the Trinity in their formation in the consecrated life during my thirty years of ministry as novicemaster.

In fact every Christian has been consecrated by baptism in the name of the Father, the Son and Holy Spirit. The Christian thus participates in the life of the Trinity by which he pursues his growth in the Christian life by developing the three theologal virtues of faith, hope and charity. In recognising this essential reality the one who accompanies another is aware that he is only the instrument of the Trinity in this monastic formation.

According to Dom Guéranger, ‘a monk is someone who takes Christianity seriously’. In this case the monastic vocation must fulfil more perfectly the fundamental consecration of baptism. Who could help to attain this goal if not God the Father, the Son and the Holy Spirit? In fact God the Father calls and shapes, God the Son is the formator and the model, the Holy Spirit sanctifies and accompanies. To make this clearer, the process of formation may be represented by a simple agricultural image: the shaping is working the soil, the formation is spreading good seed on the ground which has been worked, and accompanying is watering and ensuring that the seed germinates, grows and yields fruit.

God the Father calls and shapes

The Bible gives us a good number of passages which reveal the specific action of the persons of the Trinity. As the Father has called us into existence he is also the source of our vocation as consecrated people. Jesus told us to pray the Master of the harvest to send workers into the harvest (Luke 10.2). He also stated, ‘No one can come to me who is not drawn by the Father who sent me’ (John 6.44). The term ‘draw’ sends us back to the exodus from Egypt by which God drew the chosen people into the desert to shape them in the desert during forty years. So much patience did he show in this process of education! (Deuteronomy 1.31; 6.21-26).

The New Testament shows the important role of the Father who reveal Jesus to us, ‘It is not flesh and blood that have revealed this, but my Father in heaven’ (Matthew 16.17).

God the Son as formator and model

If the Father is at the origin of every vocation, the Son is the model for it. To form is to present the aspirant as a concrete model to be formed as a new man. Christ is at the same time true man and true God, as Vatican II affirms, ‘The mystery of human existence is truly revealed only in the incarnate Word. In fact Adam, the first human being, was the figure of the one who was to come, Christ the Lord. As New Adam Christ, in the revelation of the mystery of the Father and of his love, fully manifests humanity to itself and reveals the sublimity of the human vocation’ (GS #22).

Formation is like a process of growth to arrive at ‘the state of the perfect Man, the stature of Christ in his fullness’ (Ephesians 4.13), a process in which Christ constitutes the ideal model of one who is accompanied. According to St Augustine, ‘we not only belong to Christ but we are called to become like him’. St Paul invites us to be ‘rooted and built in Christ’ (Colossians 2.7) or to ‘have in ourselves the mind of Christ Jesus’ (Philippians 2.5). Formation should not be understood as an exterior imitation, but as a process of total transformation of the person in order to be able to become an authentic disciple of Christ. Who can effect this transformation? The Holy Spirit.

The Holy Spirit, accompanier and sanctifier

The Holy Spirit, also called parakletos, a Greek term which means ‘called to the side’ is thus the accompanier. He lives in us and we are his temple by there pouring out the fullness of his love (1 Corinthians 6.18) and by there planting the fruits of this love (Galatians 5.22). With good reason St Bernard called the monastery the schola caritatis (school of love) or schola Spiritus Sancti (school of the Holy Spirit). St Paul counsels us, ‘Since the Spirit gives us life, let us walk under the guidance of the Spirit’ (Galatians 5.25). This forms the basis of the theology of spirituality and also that of the pedagogy of the process of formation for the consecrated monastic life. On this foundation formation cannot but be effective and successful. Obviously we could also enter into dialogue with other domains such as psychology, anthropology, sexuality, pastoral, spirituality in order to give formation
a universal character. 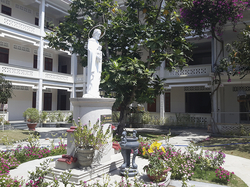 First of all I would like to thank the President of the Congregation for doing me the honour of presenting this vitally important theme, probably because I am an old hand in this ministry. That is certainly the case, for I count twenty years of the exercise of this ministry, though on the level of knowledge I have never attended a session of accompaniment. ‘It is by practice that one becomes a practitioner.’ As experience is the mother of skills, so age has allowed the accumulation of experiences in the course of the years, permitting me personally and in all simplicity to share some skills that I have acquired through these experiences.

1. I returned to my country in 1971 after pursuing further study of theology and philosophy at the University of Fribourg. At the age of 33 I received the charge of the noviciate. I had no idea what I was doing. But on the advice of a senior, Dom André Tich, a man of God experienced in the formation of priests, I had recourse to the Holy Spirit because the Spirit is the ultimate formator of vocations.

2. Above all it is necessary to build up in each aspirant a theologal life, that is, a life of faith, hope and love as a child of the Father of Heaven, as the First Letter of John teaches (1.1), ‘Listen, see, contemplate, touch the Word of life.’ In a concrete way I give a lot of time to the Word of God: biblical studies, a weekly conference on a biblical theme or a sharing of experiences in the living out of the Word of God.

3. Obviously one must insist on catechesis, Benedictine and Cistercian monastic traditions, for the discovery of the vocation proper to each Order and for the pertinent adaptations to the socio-cultural environment of Vietnam.

4. Above all, accompaniment demands presence and participation in all the activities of the noviciate, since young people prefer witness to teaching. Not long ago I asked the previous Archbishop of Hanoi, Joseph Ngo Quang Kiet, ‘What would you say is the most important element in monastic accompaniment?’ and he answered, ‘Love shown in practice by service and care for others’.

5. Certainly we must get to know the qualities and faults of the young people under our care. Personally I find that our young Vietnamese are very intelligent and generous, at least at first, but they are easily discouraged and easily influenced by exterior factors. Is it the totalitarian regime which makes our young people allergic to unveiling their own intentions sincerely? That is why we do not attach too much importance or give much credit to other people’s evaluations. In order to know them better it is preferable to observe patiently their daily life and behaviour in multiple situations and stressful circumstances.

On the human level I think it is worth mentioning the following comments of Mgr Paul Nguyen Thai Hop:

This environment [socialism in Vietnam] does little to form people of character and interior strength who seek to affirm themselves by their moral values, such as living by their conscience, avoiding a herd instinct or insinuating themselves into the good graces of their superiors. There need to be people of great interior strength, who pride themselves on the realisation of human values in their ordinary life, who are determined to be honest because of their moral ideals, not merely people who put on a show of conformity.

Nevertheless, we must avoid putting everyone in the same basket. Most of our aspirants, if they live in community with experienced and profoundly religious seniors, will be transformed and will grow in their vocation in the search for God. Thus we see the importance of community; it plays a decisive role in monastic accompaniment.