We have 125 guests and no members online

Cécile-Mariam (France), Oblate of the Abbey of Abu Gosh (Israël)

‘I always say to the monks whom I meet on my journeys, “Your oblates are your best friends, the most trustworthy and the people who have most impact on your monastic life”’. With these words the Abbot Primate, Gregory Polan, opened the worldwide Congress of Benedictine Oblates which was held at Rome, 4th to 11th November, 2017. And to continue, in a highly-valued opening conference, he asserted that the clue to the relationship between an oblate and his or her monastery is ‘to give and receive something important, sacred, intimate and living.’

Important, sacred, intimate and living are adjectives most appropriate to qualify what we were able to live, share, exchange and discover during this Congress, which brought together two hundred Benedictine oblates from thirty-six countries around the world. All the continents were represented, with a preponderance of English-speakers coming from the whole of the Commonwealth. Africa was also well represented, as well as the Philippines, Vietnam and Korea. Also a few ‘isolated’ oblates came from countries traditionally less well-provided with Benedictine monasteries and oblates, China, India, Sweden, Malta, Israel.

The lives of oblates all over the world are unique and very diverse. In sharing our lives as oblates it became clear to us that they are highly dependent on the geographical area and the culture in which we live, since we apply the spirit of St Benedict in a secular life. For this reason we were able to be amazed at each other in face of the realisations characteristic of each country and each culture, without dependence on one single example. The incarnation of the Benedictine life in the world is truly something ‘charismatic’ in the sense that this incarnation requires a careful listening both to the spirit of our particular monasteries in the midst of which we live our daily lives, and to the Holy Spirit which calls and directs each one of us personally.

The excellent conferences drew our attention. Apart from the most remarkable contribution of Sister Joan Chittister from Pennsylvania, I listened with great interest to the conference of a Dutch oblate on the questions which arise very sharply for a number of monasteries and oblates of Europe and no doubt the West: the link of brotherhood between oblate and monastery, the difficulty of living an authentic brotherhood between monks and oblates, the closing of monasteries and the fate of the oblates.

Our welcome at Sant’ Anselmo cannot pass without comment. The previous Abbot Primate Notker Wolf, who avows a special affection for oblates since he initiated these world Congresses, received us. Vespers found monks and oblates from every horizon united to sing the Office. In such circumstances I was struck by the incontestable advantage of plainchant, which, besides preventing English from dominating even the liturgy, is a language unfamiliar to everyone! At the end of Vespers we were welcomed into the cloister and refectory for the evening meal in the form of a picnic. Our brothers the monks of Sant’ Anselmo gave us their places at table, ensured that we lacked nothing, served us and made themselves available for informal fraternal meetings. There were two hundred of us, and we literally invaded this fine and inspiring house. The welcome given to us touched me enormously, for I had not thought that a place so privileged and noble would be able to bring out so much simplicity, love and fraternity. I suddenly realised that through the brothers it was the Lord in person who was welcoming me home to the house of Sant’ Anselmo which is also in a way our own.

In a few rapid words this is an echo of the Congress. By sharing it with you I hope to contribute to ‘giving and receiving something important, sacred, intimate and living.’

I left for the fourth world Congress of oblates at Rome with my head full of questions. What would my place be? What would it contribute to me? From the moment of my arrival all such questions disappeared. Despite the language-barrier which was quickly felt, I felt myself enveloped in a current of true love between brothers in St Benedict which knew no frontier. I would like to share some of the strong moments of the Congress in all simplicity.

Limited though I was in my exchanges through lack of adequate mastery of the international language, I ‘travelled’ all over the world merely by paying careful attention to all the notices prepared by the monasteries so that we should get to know one another. Like a child who cannot read, I was guided by the pictures. Humble chapels in majestic Roman or gothic arches, it was the same Presence. Under the sun or the heat-haze, in the banana-groves or the apple-orchards were oblates glad to find themselves in their own monastery. From Asia to Africa, from America to Oceania, passing by Europe, everywhere was the medal of St Benedict like a red thread from one end of the earth to the other. At the end of my journey I swept over the whole journey, ‘Finally I am at home everywhere’, I concluded. For Christ there is no continent, and St Benedict has abolished all frontiers. 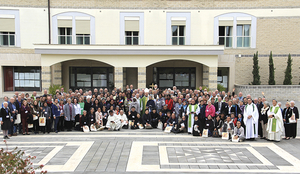 The liturgical Offices were especially unforgettable, the psalms read first in one language, then in another, but always in great union because each country had its translation. And suddenly the whole world was united in a single voice, thanks to the plainchant, a true universal language of the Church – and that I had mastered! Each Office was for me a moment of sheer blessedness. The whole world was present. No question of staying on the edge of the road. One step forward was enough to find oneself swept up in an irresistible current of love, following Christ and St Benedict who would lead us together to the heavenly city. The emotion was at its height when, at the end of the day, the Salve Regina, sung in one voice, peacefully soared into the sweetness of the night. Tears were not far away!

When one finds a treasure, it is a pity to keep it for oneself. It would be lost. So to conclude my reflection I would like to entrust you with ‘a fine pearl’ which fell into my heart at the time of the Congress:

A monastery is a well.
The oblate comes to draw water
To quench thirst and carry it to the world.
The oblate waters the earth
And returns to the monastery
Carrying the fruit. (Delphine, from Burkina Faso)

Thank you, Delphine! You grasped it all and expressed it beautifully. I arrived with my head full of questions. I left with my soul at peace, my heart moved, my head full of plainchant and one single desire, to come back again. My stance as oblate has a new dimension. The walls of my little monastery have receded to the end of the earth.