We have 124 guests and no members online

Throughout the centuries, Benedictine monasteries have always been known to be centres of art and culture, and have cultivated a type of art that St Benedict himself handed over to his monks. The values of noble simplicity, sense of balance, and harmony are enshrined in the Rule that St Benedict wrote for monasteries. Chapter 57 of Benedict’s Rule (RB) is devoted to the artisans of the monastery.

The Abbey of the Transfiguration in Malaybalay, Philippines, is one good example of a Benedictine monastery whose art has contributed greatly not only to enriching the cultural landscape of the region, but also in leading others to an experience of the Divine, the creator of all beauty, God himself. Founded in 1983 by the first Filipino Benedictine abbot, Fr Eduardo Africa, OSB, Transfiguration Abbey is nestled in the magnificent hills of Bukidnon, in the southern island of Mindanao.

Barely ten years after its construction, the original monastery church soon became too small for the countless people who had started to flock to the monastery. And so it was decided to build a new monastery with a bigger church. The New Monastery Development Committee was organized to help raise funds for the construction, with Senator Vicente Paterno and Imelda O. Cojuangco as chairpersons.

With the help of another benefactor, Manolo Agustines, they invited Filipino National Artist for Architecture, Leandro Locsin, to design a whole new monastery complex, with the Transfiguration church as its centrepiece. The new church was inaugurated on August 6, 1996. 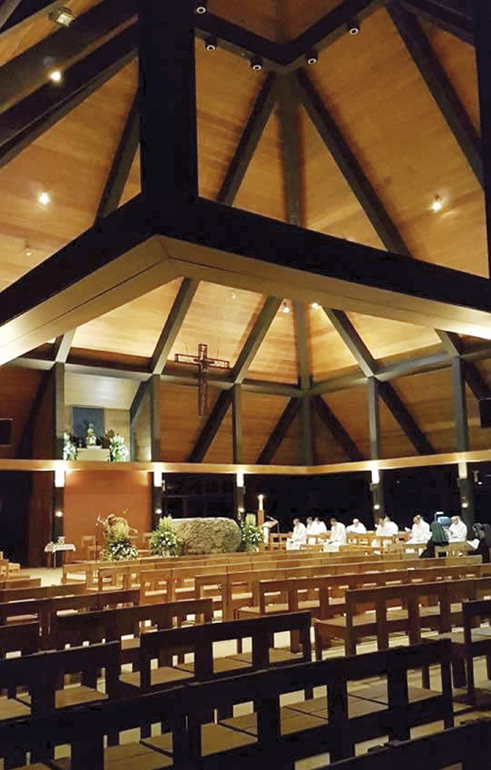 Leandro Locsin, also known as ‘The Poet of Space,’ is very attuned to Filipino living patterns and has frequently incorporated common local and vernacular spatial qualities into his designs. Many people who come to see the Transfiguration church often think that the inspiration of Locsin’s church is the pyramid because of its very dominant pointed roof of black shingles. But the truth is that the traditional bahay kubo or the lowly house of the Philippine countryside made of bamboo and nipa (dried palm leaves) was his real inspiration. If one looks up to the ceiling of the church and imagines all the black steel rafter-columns as bamboo, and the hard wood placed horizontally as nipa, then one sees the very interior of the bahay kubo, and how Locsin has interpreted the native theme into a very modern presentation.

But more specifically perhaps is the inspiration from the Ifugao huts found in the northern tip of the Philippines. In the rice terraces of the Philippine Cordilleras, one sees these clusters of pyramid-roofed huts nestled among the terraced slopes, like giant mushrooms on a carpet of green velvet. Also adapted from the vernacular is the large open space with hardly any ceiling-to-floor partitions. This open-air design provides flexibility for the church’s seating capacity. Thus individual chairs were also designed instead of the traditional church pews.

At the centre is the Transfiguration church’s most unique altar, a huge volcanic boulder found some 20 meters from the church site, with its natural texture retained. How true indeed, to the biblical description of a rock as an altar!

In this magnificent church, the monks of Transfiguration Abbey observe the traditional Liturgy of the Hours, with Matins at 3.40am and Compline at 7pm. The monks have been blessed to welcome to this monastic church not only high-ranking church officials like abbots president, papal nuncios, cardinals, etc., and government officials including Philippine presidents, but also thousands of guests and specially devotees of Our Lady of Montserrat whose replica-image is enthroned behind the altar.

Facing the Transfiguration Church towards the direction of Mt Kitanglad, is the Museum of Transfiguration Abbey (MTA). Inaugurated on August 6, 2008 on the occasion of the Silver Jubilee of the monastery, the museum was envisioned to be the permanent home of the Filipino Liturgical Vestments Collection of the monastery. Created as the monastery’s contribution to the celebration of the Centennial of Philippine Independence in 1998, this collection was exhibited initially at the Ayala Museum in Manila for six months in 1998. Then it went on a series of exhibits in the US West Coast, and then a part of the collection was presented at the Textile Museum of Canada, before it finally came back to the Philippines. 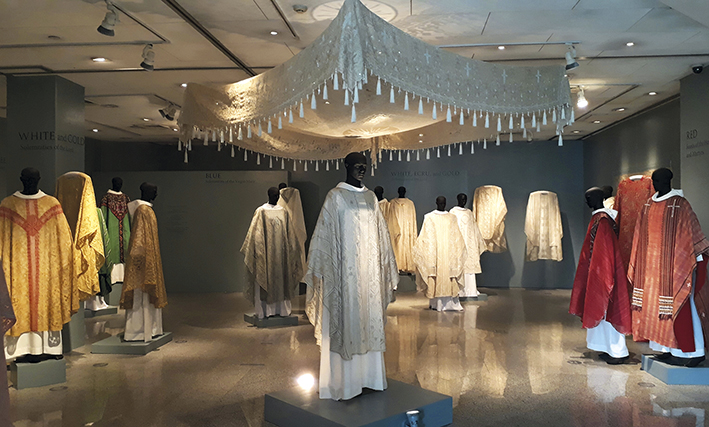 This is a 50-piece collection of liturgical vestments all made of hand-woven Filipino indigenous materials. St Benedict encouraged his monks in the Rule (RB 55) that the material for clothing should be ‘whatever is available in the vicinity.’ The General Instructions of the Roman Missal have said that ‘the sacred vestments should contribute to the beauty of the sacred action’. The Instructions also state that ‘the beauty and nobility of the vestment should derive from the material used and the design, rather than from extraneous and lavish ornamentation.’ Furthermore, materials of the locality may be used for the liturgy.

When the Spanish colonizers came to the Philippines some 400 years ago, they brought with them their European vestments. Most of these were not suited for the Philippine tropical climate. But the early Filipino priests were just too glad to wear these vestments.

In recent years, specially after the Second Vatican Council, the Church has been more conscious and respectful of the culture of the people where the Church finds itself. For the last 40 years or so, this movement in the Church called Inculturation, has been gaining more force and acceptance. In the Philippines, the Benedictine monks have been in the forefront of the Inculturation movement. Soon after the Second Vatican Council, the brilliant Filipino Benedictine composer, Fr Benildus Maramba, OSB, of the Abbey of Our Lady of Montserrat in Manila, started to compose liturgical music in Filipino. Another Benedictine monk, Fr Bernardo Perez, OSB, started to promote inculturated church architecture with the use of indigenous materials like narra, bamboo and adobe. 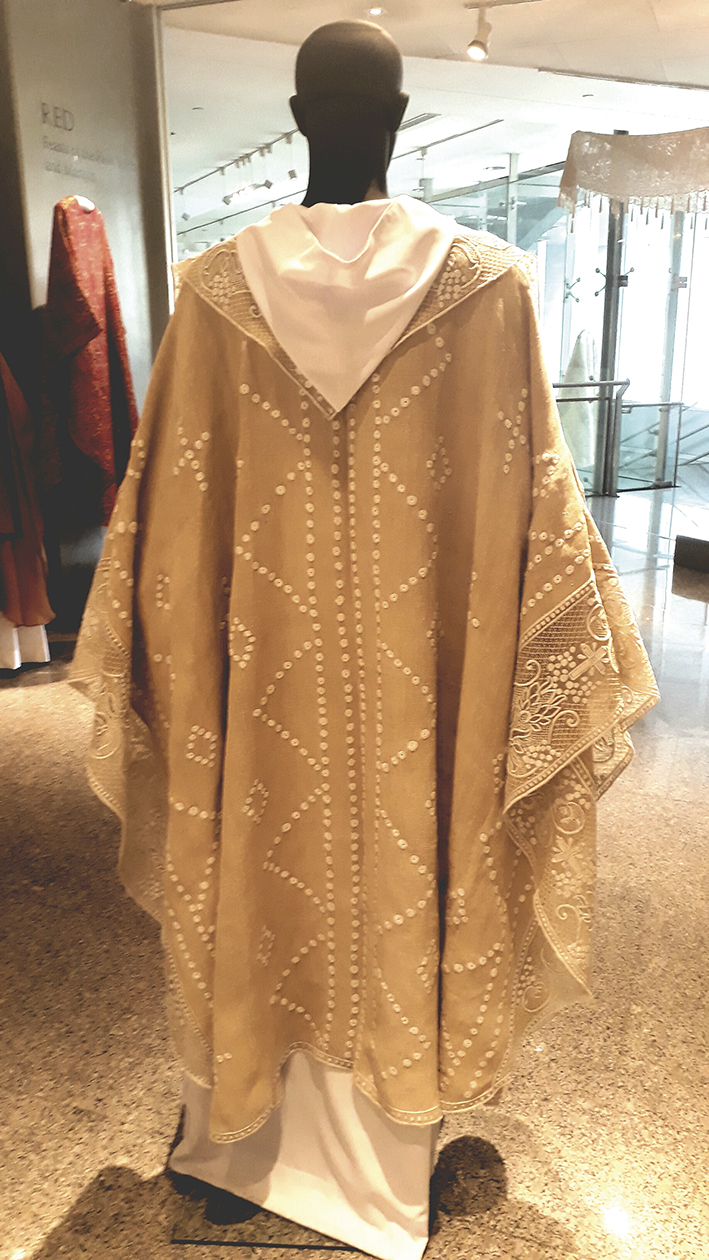 In the Abbey of the Transfiguration, Dom Martin Hizon Gomez, OSB, a former fashion designer for 20 years before entering the monastery, started to work on the inculturation of liturgical vestments. With the encouragement of his mentor, the late Fr. Anscar Chupungco, OSB, the first director of the Paul VI Institute of Liturgy (PIL), Dom Martin made a systematic research on the material, design, color and the use of textiles woven from Filipino native materials like abaca, (the fibre from the trunk of a banana tree), piña, (the fibre from the leaves of the pineapple plant), cotton and silk. Originally intended only to support his lectures at the PIL, his research led him to visit 20 weaving centres and ethno-linguistic groups all over the country, from the Ifugao in the north, to the Yakan in the south. He asked the many ethno-linguistic groups to weave textiles which could be used for the liturgy, indigenous textiles which were compatible with the solemnity of the liturgical celebration.

The result is the 50-piece collection permanently exhibited at the Museum of Transfiguration Abbey which Dom Martin also designed. With this collection of vestments for worship, the artist-monk was able to wed Benedictine classical art with the indigenous textiles of his country. These vestments exude the qualities of noble simplicity, balance and harmony, along with the tradition of classical art and the Benedictine respect for native elements.

Many of these vestments have been used for special celebrations in the abbey church. But they are ‘enshrined’ in the museum, instead of being kept in the sacristy so that they can be admired and studied. As works of art, they are given utmost care, as St Benedict desires for all goods of the monastery, as if they were ‘sacred vessels of the altar’ (RB 31). Hopefully they may inspire others to continue in their own localities the project of inculturation of vestments which Dom Martin has begun at Transfiguration Abbey, so that in all things God may be gloried.