We have 99 guests and no members online

The business of the Abbey of Chantelle

The business of the Abbey of Chantelle

The Abbey of Chantelle has long specialised in a fine cosmetic business. It was interesting to have an historical evaluation of this ‘business’ run by a monastery of nuns. The community is not very numerous today but maintains its autonomy with relation to the employees. We thank Mother Pascale for her thoughtful article.

After the Second World War (1939-1945) women’s monastic communities were called to organize themselves to earn their keep. Until the 1950s the community of Chantelle enjoyed – as did many such communities – financial independence, though with a certain supplement from income from art and work on decorations, images, etc. But from 1952 onwards the sisters of Chantelle, helped by a monk, considered the making and sale of various products for hygiene and toilette in the family, a work which began in August 1954. A written agreement exists; it was decided that:

• Sales should be by post, directly to those who used the products (not all that common at that time). That would make the rhythm simpler to regulate and more compatible with the demands of participation in the Divine Office. There was no question of the sisters leaving the monastery to sell their products.

• Competition would be on the basis of current quality products, and the presentation would be very simple, but attractive, and all directed to the family market. The first commercial products would be body lotion and eau de Cologne. Several producers and a pharmacist helped the sisters to get their formula right.

Two sisters were especially closely involved; one, a mathematician, took over the accounting, and the other, a chemist, was to be responsible for production. Other sisters joined in the work and trained themselves in conceiving, making, finishing off and packing the products. 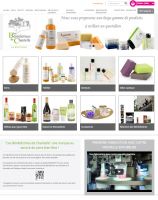 In the course of time the reputation of the products of Chantelle grew, and the business developed more and more, with care that it should remain proportionate to the size of the community. Then new products began to be developed, such as face-creams and hand-creams, after-shave lotion, tonics and shampoos, etc. Shops also began to sell on our products. In 1952 a limited company was developed (‘Les Fabrications des Bénédictines de Chantelle) and then in 1982 a SARI, which took the name ‘Societé Nouvelle des Fabrications des Bénédictines de Chantelle’ (SNFB). Two communities of nuns became successively subsidiaries between 1965 and the beginning of 1993. Next, in June 1993 the Abbey of Sainte Marie du Désert asked the sisters of Chantelle whether they could develop an enterprise in such a way that it would give them work which would allow them to continue to live by the work of their hands. After reflection and agreement, Sainte Marie du Désert became a subsidiary of Chantelle from 1994 till the beginning of 2012. This was a period when a number of monastic shops were opening, and it was therefore relatively easy to find new clients and to expand the number of products to allow an income for each community. From 2001 till 2010 the Abbey of La Pierre-Qui-Vire also became a subsidiary of Chantelle, and equally in 2001 acquired a commercial fund.

In 2005 the business received the certification ISO 9001 for the totality of its businesses (and this has been renewed since then). This process of improvement of mutually beneficial relationships between clients and producers has continued, without any damage to our vow of monastic conversion. It helps sisters, brothers and employees to get organized (two focus-points within the business), to communicate better and to work together efficiently.

In 2012, for reasons linked to the communities and also to the wider economic difficulties of the time, Chantelle decided to take everything into the site of Chantelle itself. In the course of the years employees have been added to strengthen the work-force and supplement the skills of the sisters. The increasingly rigorous regulations (EU no.1223/2009, relative to cosmetic products), the rules of Bonnes Pratiques de Fabrication en Cosmétiques (ISO 22716) and commercial complexities have made it necessary to employ people more competent and more mobile than nuns who, no matter how numerous they were, could not take on the constraints of this kind of work without harming their monastic life.

Today (that is, in 2016) sisters and employees are called to a great collaboration. All the sisters work in one way or another in the business, one sister is director, one responsible for the financial and administrative side, others sell in the shop, still others – and mostly the more elderly – work at the finishing. Under the responsibility of the sisters, and in close collaboration with them, the employees conceive, manufacture and sell the different cosmetic products, whose range is constantly renewed.

The question arises, why continue this work if the sisters cannot run it on their own? There are two principal reasons:

• To provide work for the sisters, including those who are no longer young, to balance their life of prayer and community, remaining open to the realities of the world.

• To provide sufficient revenue to enable them to continue their monastic life at Chantelle, to maintain these precious buildings and to live in solidarity with the poor.

The presence of employees ensures that the whole business must continue to function, and that salaries can be maintained in the future. It is a challenge that the sisters and the employees must take on to ensure the solid and effective continuance of the business. For this it is indispensible to be alert in three areas:

• The collaboration between sisters and employees must build on the memory of the history and the business and the choices made, listening to one another, sharing of skills, of good company, of care of one another, for example care that the older sisters may be able to continue to make their contributions to the furtherance of the business. Expansion, confidence and generosity must be at the heart of the enterprise. Weekly meetings, departmental meetings, the dynamic contributed to the business by the constant care for quality, the challenges which the different departments set up for themselves, defined indicators of performance – all these can show the success of this first point.

• The fabrication of the product and its quality respond to the expectations of our clients. We pay close attention to the feedback and the satisfaction of our clients. The Production department refers to it for research and development and keeps a close eye on quality and success of the products.

• Maintenance and development of the business, while keeping it within bounds. Any business must make some contribution to society. At the same time it is vital to keep the margins required to cover associated costs. For this reason we value greatly the mutual contribution which the producers and the clients make. Prices are fixed fairly in relationship to costs, but also with care that they are not beyond the prices acceptable to our clients.

Working together in a beautiful place so full of history is a great privilege. However, it carries implications  for each, sister or employee, at the level of work and relationships. The impetus to go forwards in the current economic climate, and in that of our monastic communities in Europe, comes from this harmony. That is why our work remains a service to the Lord and to each of the sisters of our community.