We have 55 guests and no members online

Twenty-six people from around the world gathered in Rome in  March 2015 to begin the Monastic Formators’ Programme. They were Benedictine and Trappist men and women from Europe and North America, from South East Asia (the Philippines and South Korea) India, New Zealand and from Nigeria, Cameroon, Uganda and Tanzania in Africa. Mostly we were young and involved already as Formators, or were preparing to be Formators or at least, who might be asked in the future to help with Formation in their communities.

I was the old man of the group at the age of seventy-one. I am a Benedictine from Worth Abbey in England, and having just finished twelve years as Parish Priest of our monastery parish, I was offered a four-month sabbatical, and I elected to participate in the three- month-long course as a part of the sabbatical. I wanted an opportunity of re-grounding myself in my monastic vocation as it approached its twilight years.

What follows is not a blow by blow account but simply picking out some impressions. What was vitally important for us all were our fellow participants. Fathers Mark Butlin and Brendan Thomas were the organisers, and both of these English Benedictines worked hard to create a community out of a disparate group. Brendan was the musician and put in a lot of graft, creating a choir to sing an Office that was reduced in scale from a full office, but which gave us a sense of regularly turning to God in prayer. For many of the participants English was not their first language, nor their liturgical language. Nor was there a  common musical tradition, and yet with a mixture of English and Latin, and with simple musical chants, largely the composition of Alan Rees, and with one or two very good cantors we were able to celebrate with dignity.

Meals were the regular recreation times, and while breakfast was taken in silence, lunch and supper were talking meals. Different cultures took differently to talking meals, with perhaps Europe and North America taking a lead in the art of table conversation.

You would have thought that monastic dress would be black for the Benedictines and black-and-white for the Trappists, but not so. Benedictines were found in several alternatives - all white, or in blue or grey smocks, or perhaps changing into white for Mass only; Trappists were no less varied -  black and white vied with a rust colour used in Africa for a work habit or travelling habit, a plain grey tunic, or  black worktop and jeans.

The course was over seven weeks in Rome and six weeks in Assisi, and what a great joy and privilege it was to become familiar with these places. It was impressive for me to be shown the sites, but how much more so for those from faraway places, say in the middle of Africa, for whom this was their first visit and probably their last, in which they were able to connect with the whole course of Catholic Christian history from the first centuries to the present day.

And the course itself? Highlights for me were Abbot Bernardo Bonowitz, a New York Jew turned Christian, turned Jesuit, turned Trappist, turned Abbot of Nossa Senora do Nova Mundo, Argentina, speaking from his deep and profound experience of monastic life; and that giant of spiritual wisdom, Michael Casey from Tarrawarra, giving us a week-long course on the art of winning souls in monasteries. Intriguing too was Sister Maureen Cusick, NDS, leading workshops on human development, particularly our sexual development as celibates. It was interesting finding oneself talking about the intimate details of one’s sexuality with fellow monks, nuns and sisters. 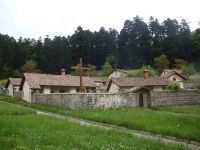 Three other trips particularly stick in my mind – the monasteries of Vitorchiano, Camaldoli and Monte Cassino. The first is a community of Trappist nuns situated near Viterbo north of Rome. They are 75 in total and that is after making seven foundations in the last 25 years, with at present, eight juniors, four novices and two postulants, almost all Italian. It is a success story (perhaps unparalleled in Italy) not just because of its phenomenal growth, but because there is a vibrancy and authenticity about the life lived there. They are serious about the things of God which comes first in their list of priorities with the full office of the Rule, then times for personal prayer morning and evening and Lectio in the morning done all together at the same time.

They are equally serious about the quality of their communication with each other. There is a daily chapter and weekly group meetings. What has evolved over time is a real culture of dialogue including speaking the truth in love to each other, and the outcome is that here is a community which is very trust-filled and liberated. It means that there is a real and genuine human communication which gives life to the community, and is extremely attractive to those who seek a vocation with them.

Camaldoli was an eye-opener to many of us. The Prior General there spoke of the place living by the spirit rather than the letter of monastic law, and in explaining his vision, he focused on the twin importance of Lectio Divina, and living an Easter spirituality, both of which promoted a community with an affective maturity. He further suggested that formation needed to be long these days, because people today were so poorly formed in Christian knowledge, and he felt that modern forms of devotion in young people – he specifically mentioned the Rosary and Mejugorjie– were hardly solid foundations for a monastic life of Lectio and Liturgy. 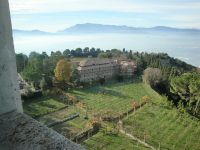 Monte Cassino was a surprise. I had been there before and had found a sadness in a community of ten monks living in a monastery built for three hundred. Now, however, they have a new Abbot, Donato, who had until recently had been Abbot of Bari in Calabria and previous to that a monk of Praglia near Padua. He answered questions for about an hour and seemed to have a clear vision that the future ministry of the monastery was to serve the spiritual needs of the thousands of pilgrims arriving to see what is essentially a state monument. Incidentally, when it was suggested that he had a difficult job, he replied by saying no, it was easy! Finally, on our Programme as a whole, we were given many excellent examples of monastic hospitality particularly at Monte Cassino, the English College in Rome, Sant’Anselmo and in Assisi at the St. Guiseppe and Sant’Anna communities.

Just two final comments. I had never met Trappists before, and didn’t for one moment have a worry that we didn’t share the same language, and at the end of the course I concluded that what united us as monks and nuns was far greater than what divided us. And second, we were delighted and privileged to welcome the Benedictine Primate, Abbot Notker. He came across as a charming, delightful, hard-working person whose heart and soul were monastic, and a living example of what a generous and kind person monastic life produces. The Programme was a great success and is highly to be recommended. 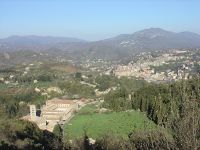 It is now a month, since the programme of MFP 2015 ended. I look back on these days and experiences with great joy. Having reflected and rested, I am now able to write a simple narrative of the experience I had as a participant from Uganda, from the monastery of Our Lady of Praise.

I enjoyed this programme very much, and I attribute this in great part to the experience and loving care of the two coordinators, Fr. Mark Butlin and Fr. Brendan Thomas. The physical surroundings of the two places where we stayed, six weeks in Rome and six weeks in Assisi, made the whole experience very rich. We had opportunities for sightseeing, visits and pilgrimages to different historical sites in the Catholic and monastic tradition. Here I mention the visits to different communities and Catholic institutions forming people for mission and evangelization, and to lay movements such as Sant’ Egidio.

Never in my life did I ever dream of the possibility of treading the rich soils of Italy with all the history that unveiled itself in living reality as we made these tours through the streets of Rome and Assisi. We visited for example the Catacombs of Priscilla and made pilgrimages to Monte Cassino, Subiaco, Norcia and to many places in the peaceful city of Assisi: encountering St Francis and Clare in their tradition.

Reviewing my own formation days 15 years ago and the time since, I realise that this programme has been another very significant milestone in my ongoing formation as an individual. I have benefited a great deal in many different ways. This was so because of the well selected, experienced teachers of the monastic tradition, to mention but a few, Sr Aquinata Bockman, Fr Michael Casey, Fr Columba Stewart, Br Colman O’Clabaigh and Abbot Gregory Polan.

The experience of community living with monks and nuns from many different countries and cultures was very rich and life-giving.  This made the days move swiftly and gave the chance to participate in the rich heritage we all value, most importantly in the tradition of the liturgy. This helped us to actively participate in creative ways, through preaching, reading and chanting. These experiences animated the group and so helped us to approach the days with freshness and eagerness.

The subject matter of the programme is suitable both for formators and for individual spiritual formation. I felt empowered and strong enough to accept whatever responsibility would be given me on return to my community. Already I have been appointed to be on the formation team and to help the aspirants integrate into our way of life. I feel that with the help of the programme I am able to give and share my experience with those who need it. I would also recommend that if possible all those in this area of formation who have not been on this course should apply, because it is very beneficial. The challenge remains for individuals to find ways to deepen and make this intense knowledge personal to them.

My gratitude goes to the benefactors of this programme who have enabled many of us to attend this course, to the teachers and to the coordinators. I would recommend here if possible to add a third person to the team of coordinators, which would reduce the work load of the two who have worked so well and unsparingly for us in the past years. With the Psalmist I say, ‘I will praise God’s name with a song; I will glorify him with thanksgiving’ for what God has done for me in this year 2015. ‘And may he bring us all together to eternal life!’ (RB 72) Amen.

This course took place also in the Philippines in 2015: 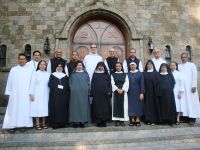