We have 87 guests and no members online

Freed from the Turkish Regime in 1878, the Bulgarian King Ferdinand of Saxe-Coburg invited German farmers and tillers to come and teach the Bulgarians farming methods.  Some farmers settled in Endje, presently Zarevbrod.  Together with them was a German Passionist priest, Fr. Franz Krings.  He built the church in 1910.  Conscious of the need of teaching Christian catechism to the German children, Fr. Krings wrote to our Tutzing Motherhouse, for sisters to help him.  Thus, four German sisters came on January 14, 1914 and in a makeshift classroom, they started teaching the children and youth, preparing them for First Communion.  One sister was engaged in the health apostolate, one sister in sewing and embroidery of church linens and vestments.  The production of the skin ointment from marigold flowers and oil from lily flowers, popular in Bulgaria and abroad because of its effectiveness, was popularized by our German sisters.  Apart from the ointments, they also prescribed herbal healing.  In 1918, the mission had to be temporarily closed after Germany lost in the First World War.  In 1920, seven sisters travelled to Bulgaria and continued their mission with great zeal.  The mission flourished in apostolate and in number.

In 1922, the mission branched out to Bardarski-Geran and in 1926, in Dragomirovo.  These two villages are in the area of the Danube River.  The sisters established the same apostolate in both branches.  During these years, Bulgaria became a Priory and was headed by a Prioress. 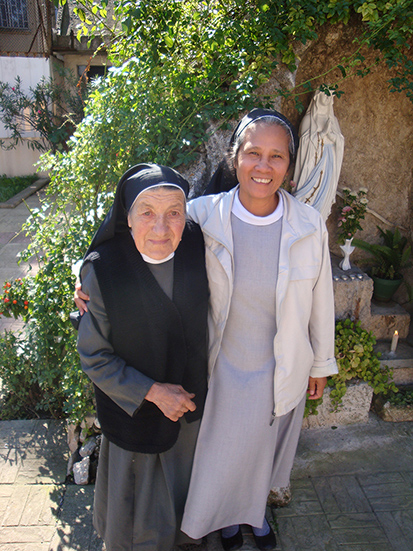 The dark period of the monastery started in 1944, when Russian soldiers entered Bulgaria and some were posted in Zarevbrod; they kept a close watch on movement in the monastery.  Thus, thirteen German sisters had to go back to Germany.  The remaining twelve sisters were put in a concentration camp for one year.  After the concentration camp, there came an order from the Tutzing Motherhouse that all German sisters had to go back to Germany.  Two sisters decided to remain and stayed with the Bulgarian Sisters and they are now buried in the village cemetery.  The sisters under the leadership of the first Bulgarian Prioress suffered and struggled during these difficult years.  In 1950, the government built the Psychiatric Hospital.  Upon the advice of one doctor-friend, the sisters offered their land for the building and they were employed in the hospital.  That was the only way that the sisters can live their monastic life together.  In 1952 onwards all monastery properties were sequestered by the totalitarian government.  Bulgaria was out of contact from the Congregation until in the late 1960 when initial meetings between the Bulgarian sisters and the Generalate took place, first in Croatia and later in Bulgaria.  After the fall of the Berlin Wall, in 1992, came the first two German missionaries, Sr. Quirina and Sr. Barbara.  Since then missionaries from Korea, the Philippines and Brazil have worked and are still working in the Lord’s vineyard in Bulgaria.

The Bulgarian mission is mainly parish work and health apostolate.  Today, this two-fold mission remains but with an additional apostolate, recently introduced, that is, the translation and publication of Benedictine Spirituality books in Bulgarian.  Zarevbrod, aside from producing the skin ointment, Mexlem, participates in interreligious dialogue by its very presence in the village, settled by Turks and Bulgarians.  A Brazilian sister, Sr. Dijanira, is engaged with catechism for the children and also in facilitating summer camps with the help of young Bulgarian animators. 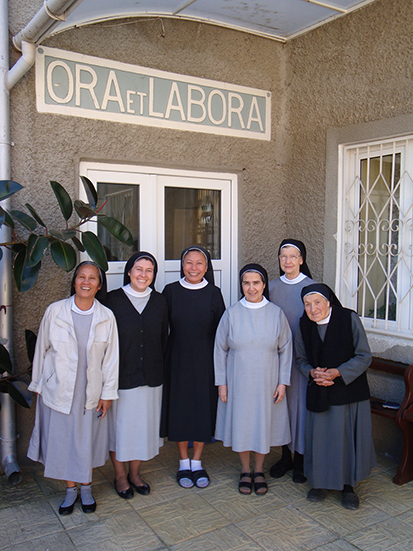 She, together with the Superior, Sr. Rosa Maria, welcomes foreign and local tourists giving them an experience of Benedictine hospitality.  The remaining Bulgarian sister, Sr. Bernadeta takes care of the flower-garden, especially the marigold flowers.  Sr. Maria Agnes is into ecology program and also catechism and English lessons and helps Sr. Dijanira with the children camp.  Sekirovo, an outreach community, is parish-based.  Together with the women in the parish, one German sister, Sr. Quirina, is engaged in cleaning the sacristy and helps in decorating the Church for Sunday Masses, big feasts and weddings.  Sr. Leticia, a Filipina, is responsible for the catechism of First Communicants, in facilitating Bible Sharing and helps in the choir.  During summer, she organizes children’s camps.  She teaches English and trains Mass lectors.