We have 153 guests and no members online

The Transmission of Faith in the Eucharistic Celebration

The Transmission of Faith in the Eucharistic Celebration

‘Why is this night different from all other nights?’ This question is usually asked by the youngest member at the table during the Passover Haggadah which commemorates the Israelites’ deliverance from their slavery in Egypt. The question is answered by the elder as follows: ‘we were once slaves of Pharaoh in Egypt, but the LORD brought us out of Egypt with a strong hand […] The LORD commanded us to observe all these statutes in fear of the LORD, our God, that we may always have as good a life as we have today’ (Deuteronomy 6.21-24).

When we gather at Mass, we renew the memory of Christ’s death and resurrection, called the paschal mystery, which is begun at our baptism. Although the whole Christian life is based on this perspective, the Eucharistic celebration ‘in which the sacrifice of the cross is for ever perpetuated’ (Canon 897) is a more important moment to consecrate ourselves to the Lord ‘through the offering of the body of Jesus Christ once for all’ (Hebrews 10.10). That is why the Second Vatican Council placed the Eucharist as ‘Source and Summit’ (Fons et Culmen) of the life and mission of the Church (cf. SC 10; LG 11; CD 30; AG 9; PO 5).

By celebrating the Eucharist in community, we not only consecrate ourselves but also transmit to younger generations the faith in Christ crucified and resurrected. Apart from the sharing of Christ’s life in the liturgy, following Jesus Christ in itself cannot ensure the transmission of faith to others. Being isolated from others and showing no concern about how they would receive spiritual nourishment from the Word of God and the Eucharist, it is hard for the Christian community to grow in Christ’s love and have more consciousness as the one Body of Christ: ‘so that there may be no division in the body, but that the parts may have the same concern for one another. If one part suffers, all the parts suffer with it; if one part is honoured, all the parts share its joy. Now you are Christ’s body, and individually parts of it.’ (1 Corinthians 12.25-27). Eucharistic participation of the whole community consists not merely of the sum of individual contributions to celebrating the Mass, but of the interior disposition of individual participants towards others both inside and outside the liturgical community.

Indeed, ‘the spiritual life is not limited solely to participation in the liturgy’ (SC 10,12). The effect of having a positive interior disposition during the Eucharistic celebration is achieved by a commitment to others acting as a witness of the gospel of Christ outside the church. The Catholic Church explains the relationship between a transmisson of faith and a social commitment in the following terms:

The duty of Christians to take part in the life of the Church impels them to act as witnesses of the Gospel and of the obligations that flow from it. This witness is a transmission of the faith in words and deeds. Witness is an act of justice that establishes the truth or makes it known. All Christians by the example of their lives and the witness of their word, wherever they live, have an obligation to manifest the new man which they have put on in Baptism, and to reveal the power of the Holy Spirit by whom they were strengthened at Confirmation (Catechism of the Catholic Church, #2472). 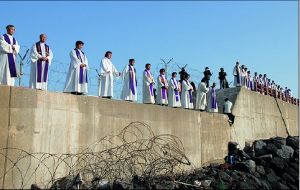 Here is an example of the Eucharistic celebration that would manifest the true Christian faith towards both non-believers and believers. It is about a small fishing village in Jeju Island, named Gangjeong, that has become a symbol of the struggle for North East Asia Peace. Many villagers and activists including the Catholic priests, nuns and lay persons have continued to oppose the construction of a naval base since 2007. There are many reasons why they are against the construction: decision without proper consultation; environmental disaster because the construction area is a UNESCO-designated biosphere reserve. Besides these, construction should be suspended because it could provoke a serious tension between China and Japan and Korea if the US navy used the base in any conflict with China. There seems to me no doubt that it would be used as a US ‘Pivot to Asia’ if the proposed massive naval base were constructed. In the protest against the construction, the Eucharistic community happened to be formed by the Catholic faithful. This continues even now every day at the gates of the construction area. The US film-maker Regis Tremblay, who visited Gangjeong in 2012, witnesses how the Christian faith for peace and justice can be transmitted to the world in the Eucharistic celebration, by writing a letter to Pope Francis in the hope of a visit by him to Gangjeong on his journey to South Korea in August 2014: ‘busloads of Catholic nuns from all over South Korea regularly go to Gangjeong to protest and stand in solidarity with the villagers. Daily Mass is celebrated in front of the main gate to the base. Never before have I witnessed such a sense of community shared by people of all faiths and backgrounds.’

Therefore, when it is said in the Constitution on the Sacred Liturgy: ‘the Church announces the good tidings of salvation to those who do not believe, so that all men may know the true God and Jesus Christ whom He has sent, and may be converted from their ways, doing penance’ (SC 9), this is true only if the entire activity of the Church flows from the liturgy, ‘especially from the Eucharist, as from a fount’: this ‘draws the faithful into the compelling love of Christ’ and makes them ‘one in holiness’ so that ‘they may hold fast in their lives to what they have grasped by their faith’ (SC 10). 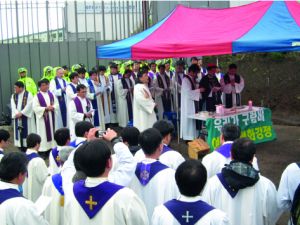 Bishop Peter Kang U-il of Jeju, President of the Catholic Bishops' Conference of Korea, presided at the Eucharist right in front of the gate to the base in Gangjeong village, celebrating the feast of the Nativity of the Blessed Virgin Mary on September 8, 2011 and cited the prophecy of Micah 5.2, ending his homily by proclaiming Gangjeong village as Bethlehem:

You, Gangjeong, too small to be among the villages in Korea, peace will begin to flow from you to the rest of the world!

The Christian faith, therefore, is born from the paschal mystery of Christ, and grows by commemorating his love through the Eucharistic celebration (fons), reaches the summit of its effect by being a witness of the gospel of Christ about justice and peace in solidarity with the poor and oppressed (culmen). As we saw in the example of Gangjeong, the Eucharistic celebration is ‘the summit toward which the activity of the Church is directed; at the same time it is the fount from which all her power flows’ (SC 10). The transmission of faith, however, depends on the interior disposition of the participants of the Eucharist. This would be ‘something more’ required for the celebration, which the Constitution on the Sacred Liturgy urges us to have. It is their minds that ‘should be attuned to their voices’, their ‘cooperation with divine grace’ (SC 11) and their expression of solidarity with the poor. I believe these must be the very essence of the Eucharist, and also of the transmission of faith.