We have 126 guests and no members online 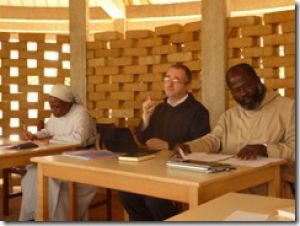 The superiors of the Benedictine and Cistercian monasteries of West Africa held their quadriennial meeting in January on the theme ‘Fifty years of foundation in sub-Saharan Africa – how have we welcomed this heritage of St Benedict, and how will we pass it on to future generations?’ the session was led by Dom Jean-Pierre Longeat, President of the AIM, and Fr Andrew Mamadou Ba Camara, parish priest of Kindia, the neighbouring town to Friguiagbé. As the theme of the meeting indicates, several monasteries of West Africa have recently celebrated or are soon to celebrate their fifty years of foundation.

At the beginning all the members present were able to express the questions and convictions with which they arrived:

1. What is our identity? Who are we? How are we viewed from the exterior (by the local Church, by neighbours) and in our own eyes? What is our link with our founders?

After this opening Dom Jean-Pierre expressed the following conclusions:

1. There is an undeniable change of mentality. Life is perceived differently from what it was fifty years ago or even less. We are called to life in a changing society.

2. Monastic life cannot be taken for granted and is often misunderstood. One can often hear about a young man who enters a monastery, ‘What a waste! He ought to enter a diocesan seminary and become a priest’, and about a young woman, ‘If only she had decided on the apostolic life!’. In reply, two important points should be made:

• It is essential that formation in our communities should be experiential rather than theoretical. It is not a question of intellectual transmission, but of sharing values lived, experienced and so deepened.

• It would be good to develop in our communities a culture of interculturation on which the Church today rightly insists.

In the discussion which followed two sets of questions emerged, those shared by all monasticism today and those more acute in African monastic life:

• Balance between flight from the world and opening to the world

• Obedience and relationship within the community

• Link to the Congregation as an anchor rather than a restriction

• Impact of the community on the neighbourhood and its relationships

• Financial independence of the daughter-house

• Stability of members of the community 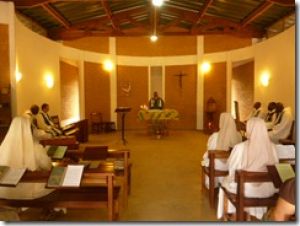 Dom Jean-Pierre proposed that these should be considered from the point of view both of anthropological development and of the teaching on the Church at Vatican II. One factor which touches all cultures is the progressive reduction, or even the suppression, of the place of God in the life of societies in most of the Northern hemisphere and even in some countries of the South, indeed globally. The teaching of the Council, notably in Lumen Gentium and Gaudium et Spes, had tried to face up to this by stressing the divine vocation of every human being. The application of this to the interior life of our communities invites us to be attentive to the presence of God in each person. A conversion is required to allow the person to develop from this centre. It is, for example, important to be able to receive a person in anger without staging a confrontation. But on a different level to moderate the anger and join such a person in entering the interior source where God inspires what is life-giving and just. The community must be at the service of the divine vocation of each member.

Relationships to the Family

In Africa this is an area particularly sensitive in difficult situations. We need to exercise a human and evangelical sensitivity, while remaining faithful to our religious and monastic commitments. Our families are on the whole aware of the demands of our monastic life. The difficulty often comes from our own monks and nuns.

There can be difficulties in accepting a superior particularly young or old. Another difficulty is the transition between the founder-superior and the first African superior. This can be a cause of suffering for both of them and for the community.

Impact of the Monastery on the Neighbourhood

All our monasteries have a link between work and helping others. Our founders bore this in mind, but it can bring problems. We need to remember the proverb ‘My neighbour is my healing’. For us the challenge is to find the balance between helping others and caring for the community itself.

The materials used in construction of our monasteries have a considerable effect on our lives at every level, prayer, relationships within the community, links with the surroundings, especially our work. Our founders had their own conception of enclosure, which dictated the plan and the architecture.

One of the purposes of monastic life is to earn our living and to enable us to contribute to those around us. Our activities should not cut us off from the world around us, but should be material for formation, education and training. Although we aim to cover our running expenses, we still need extra help for new constructions and raw materials to make us useful in this or that sector, creation of a new activity, etc.

Dom Jean-Pierre offered us a reflection on interculturation in the teaching of the Church. It is a process by which a culture is formed by the Gospel. It is open to a meeting between cultures in which the faith can be expressed. Pope Benedict XVI insisted that interculturation makes possible a meeting between cultures, knowledge and religions and even open atheism in a way which builds a new humanity. In such a dialogue, faith is the inspiration. As monastic communities we should be intercultural communities.

Meeting with the Parishioners of Kindia

The participants in the meeting visited Kindia, some 15 km away, at the invitation of the parish priest, Fr Andrew. We were warmly and generously greeted by our hosts, with plenty of local colour. This gave us the agreeable opportunity to live for a moment the reality of the country, with the symbolic gesture of the offering of cola, the fine spectacle of a troop of Muslims, the Eucharist shared and celebrated with the priests of the seminary of Kindia and the agape which followed, the generous meal offered by our hosts. This was one of the special moments of our session.

Fr Andrew Mamadou Ba Camara, parish priest of Kindia, contributed the viewpoint of an outsider on monastic life, as pastor of the local Church. Relying on the Council documents, he outlined the contribution of monastic life to the universal Church, strongly underlining its missionary role by the life of prayer. Monastic life belongs to the local Church and helps it to demonstrate and live out the inner nature of the Christian life.

A day was reserved for dialogue with the young people around the Archbishop of Conakry and some religious. This was particularly enriching. The joy of living together as brothers and sisters, united in the same love of Christ and St Benedict, was a lovely answer to many of the questions about our African monasticism.