We have 247 guests and no members online

A visit to Monasteries in Uganda

A visit to Monasteries in Uganda

A VISIT TO MONASTERIES IN UGANDA

Our Lady of Victoria at Kijonjo 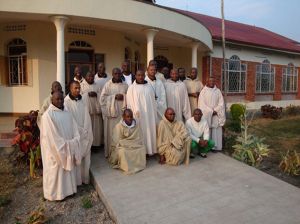 This visit began with a week’s retreat given to the Trappist monks of the Abbey of Our Lady of Victory in the west of the country some 60 kms from Masaka. The monastery was originally founded at Kipkelion in Kenya in 1956 by the Dutch Abbey of Tilburg but had to be relocated in Uganda in 2008 as the result of serious social tensions and land disputes. After temporarily being housed in a wing of Bukasala Minor Seminary of the diocese of Masaka, the community moved to its new home at Kijonjo outside the town of Kyotera in 2010. The newly built guesthouse with some 30 rooms houses the 19 strong resident community whilst it awaits the building of a permanent monastery. The generous gift of 500 acres of land by the Bishop of Masaka will take some time to bring under cultivation on account of it being wetland, but a successful project for planting trees is already underway.

The community is composed of 14 Kenyans and 5 Ugandans at present which includes a few older monks and one or two younger ones from the original Kenyan foundation. However under the energetic and sensitive leadership of a young newly elected Congolese Abbot, Dom Jean Bosco Kamali, from Mokoto, the community, being the only Trappist monks’ monastery in East Africa, is attracting vocations from a number of countries in the region.

Formation at all levels is needed in order to secure a solid foundation for the future, and this will require assistance from outside on account of a lack of resources within the community. There is an urgent need for the provision of at least 4 or 5 guestrooms so that the hospitality can be offered, thus providing an important service and link to the local Church. Being 9 kms from a tarmac road, the monastery could suffer from its geographical isolation. Income-generating work has to be developed through animal husbandry and this is already underway with the rearing of pigs, and a poultry house is under construction. Despite the hard work of the monks, external funding will be needed to take these projects forward. It was encouraging to sense the community’s desire to face the challenge of its new situation.

The Monastery of Our Lady of Praise at Butende 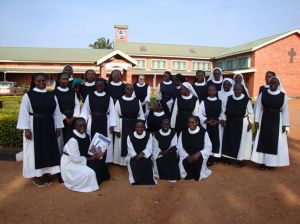 The next port of call was the Trappistine Abbey of Our Lady of Praise at Butende, some 70 kms from the monks of Victoria, going north eastwards on the main road to Kampala, the capital city. The monastery is well placed some 500 metres from this road with 55 acres of good agricultural land in part given by the diocese. As a foundation of the Abbey of Berkel in the Netherlands 13 nuns were sent to Uganda in 1964 and in 1966 established themselves at Butende. Today it is a healthy community of 28 with one remaining Dutch nun and 4 junior Sisters with one novice. Having persevered through the troubled history of the country it can be considered a solid community.

The monastery is well based economically. The electricity supply is good but the community is dependent on rain water stored in large tanks, not always sufficient in the dry season. A recently enlarged and well appointed guesthouse of 35 rooms providing accommodation for a number of groups and individuals is a very good source of income. An excellent farm, well managed by the Sisters, provides wide variety of fruit and vegetables, together with dairy products from a herd of 25 cows as well as meat from some 25 pigs as well as poultry. The Sisters also produce for sale a very popular skin cream made from aloes and make clerical cassocks for 3 seminaries. They also run a small shop in which they sell their produce and products.

The community has benefitted considerably from the on-going support of their founding monastery, evidenced by the presence of several Dutch nuns. These have accompanied the community in its growth with their wisdom and experience as well as being a valuable resource for formation. So often precisely this is lacking in foundations and thus the development of a serious and in-depth approach to monastic living is hindered. As a visitor who could share experience I was asked during my two and half day visit to give some talks which could help with the on-going formation of the community. The topic of living together in community and its implications for monks and nuns was chosen, as this is so often a key area of our monastic life which needs to be better understood from the practical and spiritual point of view.

On the 5th June 2014, the nuns of Our Lady of Praise at Butende will be celebrating the Golden Jubilee of the foundation of their abbey.

The Monastery of the Holy Trinity at Arua 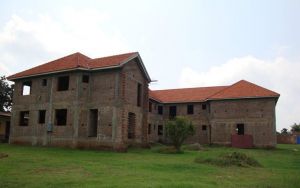 Arua is a town with a population of 60,000, situated on the west side of the Nile in the northwest of the country, some 500 kms from Kampala. As it is close to the border of the DRC, it is a commercial centre and the base of number of NGOs.

It was here that in 1960 Bishop Angelo Tarantino, a Comboni missionary, founded the monastery of the Holy Trinity, a community of contemplative Perpetual Adoration Sisters led by an Italian Comboni Sister. They followed a monastic rule of life and constitutions, drawing upon various traditions created by the founders. Both the Bishop and the foundress died in the early 1990s and a result the community was left without guidance and support. A visit by a Benedictine, Fr Pius Mülbacher, the Prior of the St Ottilien monastery at Tororo, led the Sisters through talks given by him to discover the Rule of St Benedict. Eventually after continuing contact and support from Fr Pius, the community came to know and form a friendship with the Benedictines of Blessed Sacrament in Cologne. The Sisters of Arua finally made the decision to take the Rule of St Benedict as their rule of life in 2007 and to request official recognition by the Benedictine Confederation.

I was invited to pay my third visit to the monastery this July by the Prioress in order to help the Sisters prepare for their Conventual Chapter. On account of their new provisional constitutions and their lack of previous experience of the Benedictine approach and way, they wanted advice and guidance on how to run the Chapter. In addition to normal matters such as reports and decisions to be made, there is to be the election of a Prioress requiring particular procedures. For four days, I worked with the community in preparing the agenda and timetable as well dealing with particular questions which arose. Accompanying young monastic communities in such processes is of key importance, especially when they are isolated and not linked with other monasteries in an association of some kind. The Sisters of Arua have in fact already formed supportive links with the Benedictine Sisters of Tororo in the south west of the country as well as Cologne. Finding their feet in the Benedictine way of life will be greatly helped by these ties.

The community is reasonably strong with 15 finally professed members including three from the time of the foundation of the monastery, and in addition there are 4 in simple vows as well as a postulant and 2 aspirants. Formation needs key priority in the period of transition to living under the Rule of St Benedict. A much-needed new monastery block is moving towards completion thanks to the financial help of several foundations including AIM. This replaces seriously dilapidated buildings which have been pulled down together with the very poor church for which funds now will need to be found.

The monastery has some 50 acres of land for cultivation and livestock, which can supply the community with its basic needs. The Sisters have several types of income-generating activity including making vestments, clerical tailoring, a bakery for cookies, and host and candle-making, all of which command a wide clientele, including from the Congo. As a hard-working and resourceful community, it gives evidence of wellgrounded life. Plant and equipment are the areas where it needs to seek financial assistance, as for example at present in acquiring a new hostmaking machine.

The monastery of the Holy Trinity is definitely a good sign of growth and development of new Benedictine life in Uganda, alongside the 5 other communities of the tradition.

The Missionary Benedictine Sisters of Tutzing at Jinja 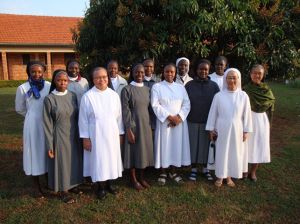 My final visit was to the Missionary Benedictine Sisters of Tutzing, who came in 1993 to open their first house in Uganda close to the northern shore of Lake Victoria near to the city of Jinja. By 1995, they had started a dispensary for the people of the locality and a kindergarten, later to become the present grade school. The present Priory, a fine monastic building, was completed in 2007 and now houses an international community of 15 Sisters, of whom 8 are finally professed and 7 simply professed, coming from Uganda, Kenya, the Philippines and Korea.

Since the majority of the Sisters are young, the most pressing need is to provide a good programme of on-going formation, initial formation being provided in Nairobi. The practical and serious living of the Gospel under the guidance of Rule of St Benedict needs to be developed with a deepened understanding of the meaning of the process of conversion. There is the challenge to face key questions and difficulties arising from today’s mentality and the local culture seen in the light of depth evangelization. In an active and heavily engaged community such as the one at Jinja, there is a need to develop a sense of real priorities and a discipline in living to achieve the right balance between ‘ora’ and ‘labora’. As so often is the case, monastic formation resources are very limited.

The dispensary run by the Sisters has received an official recognition award from the government authorities. 5 members of the community including the administrator together with 30 lay staff deal with some 200 outpatients each day. Maternity is one of the main areas in which the clinic works. The grade school and kindergarten, where 4 Sisters work, of whom one is the head teacher, have a total of 700 children up to the age of 13. The school also provides boarding facilities for 100 students, particularly orphans and victims of abuse and social deprivation. New accommodation is being built at the present moment. The school serves Hindus and Muslims as well as Christians. Finally one Sister is in charge of the farm and this provides for the needs of the community. Salaries for those working in the dispensary and school provide income to pay the day to day living expenses, but the cost of formation at all levels is not covered.

The 4 communities visited, out of a total of 6 in Uganda, are a good example of the wide range of expressions of life under the Rule of St Benedict and the ways in which it develops. The value of the visits by members of the International Team of AIM lies in being able to learn about the reality of monastic life in a variety of foundations. At the same time, experience from other parts of the monastic world can be shared. Practical advice, encouragement and various types of support may be offered.