We have 75 guests and no members online

Homily given at Ligugé on the occasion of the Jubilee of AIM
Abbot Notker Wolf, OSB, Abbot Primate of the Benedictines 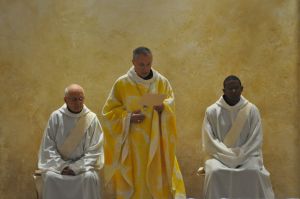 St Martin is one of the most fascinating characters at the turning-point of pagan antiquity to the Christian middle ages. The story of his life is itself surprising: at the age of 15 he became a soldier, at 18 he was baptized. He became a student of the great doctor of the Church, Hilary of Poitiers, then a missionary, and for a short period in the middle of his life withdrew into the eremitical life. At the age of 45 he founded the monastery where we are today, at 55 he was appointed Bishop of Tours, to found another monastery there, Marmoutier, which was to have great significance for Western monasticism.

St Martin was one of the first ‘Europeans’. Born in Pannonia (today’s Hungary), he was brought up at Pavia (Italy). He served in the army in France; he was baptized at Worms on the Rhine and was active at Poitiers and opened up Illyria (today’s Dalmatia and Slovenia) for Christ. His principal sphere of activity became the diocese of Tours.

There was later to be a similar ‘European’, St Anselm, the patron of our Benedictine College in Rome: born in Piedmont, educated in Burgundy, he entered the monastery of Bec in Normandy, where he was elected abbot, and he died as Archbishop of Canterbury. This other ‘European’ was distinguished from St Martin in that he could move around in a West already Christian and marked by the Gospel, thanks to the preparation of the ground by St Martin and his monks. Dear brothers and sisters, I want to stress this feature so that we may recognize the Christian and European patrimony which we inherit, so that we can make possible again what already existed in the middle ages, thanks to a shared Christian culture. The Europeans have not merely profited from economic and political unification. They themselves fashioned European culture on the basis of Greco- Roman antiquity and the Christian faith.

What St Martin undertook for Christ is incredible. Imagine all the travelling in the conditions of travel at that time! Of course the Romans had built a network of roads all over Europe. They had set up stations for horses in every town, every 40km or so. But there was no system of security such as we have today. Danger lurked everywhere, and not inconsiderable customs-duties had to be paid. It was just as well that Martin had been trained as a soldier for 15 years, so that he knew how to manage difficulties and defend himself. He must have been a dynamic personality, possessed of a formidable energy. As a young soldier he had been trained in the most exacting discipline. The Romans did not expect their soldiers to mess around. With spineless soldiers they would not have been able to advance their conquests or protect their frontiers. They needed men who could persevere, who were courageous, who could deal with difficulties, but who were also practised in a shared discipline, who could give proof of a high degree of solidarity with one another.

God obviously had designs on this man for missionary work, for the building up of his Church in Europe and for the foundation of monasteries. God needed a man energetic and endowed with a welltested temperament. St Martin reminds one of St Paul. He too was gifted with a temperament such as God needed to proclaim the Good News to Israel and Samaria, and to exert his influence in the whole Mediterranean area, someone with perseverance, who was not worried by danger. Jesus did not allow him to escape, but chose him as a special instrument. God wanted people to be saved and willed that all should know that the way to blessedness and peace passes only by his offer of salvation. For this reason he sent his Son into the world, as sign of the merciful love of God. For this proclamation he cannot use any lame duck, but he looks for courageous men and women who also in our society take up the cudgels for the value of truth and disinterested devotion to other people, and witness to this throughout their own lives. Our secularized Europe needs such men and women who build on this heritage, making themselves instruments of a renewed spiritual energy for our continent.

St Martin is known to many also for the story of his sharing his military cloak with a beggar. It was this generosity and great-heartedness which led him to baptism. In the First Letter of John we read, ‘Whoever acts like God knows God.’ Since St Martin was so generous he was able to know Christ, the love of God incarnate, and to ask for baptism. This Christ had fascinated him and would no longer allow him to escape. For Martin he was the new ‘warlord’ whom he wished to serve, a Lord who did not subject peoples to himself but led them together to peace, a Lord who did not reduce to slavery but was a guide towards liberty. 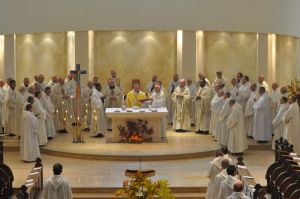 Two hundred years later St Benedict also speaks of military service in his Rule, no longer service to the king-emperor but to Christ the true Lord and king, Domino Christo vero Regi militaturus. It is a question of preferring nothing to Christ. This was what haunted St Martin, in the truest sense of the word. He tramped the country to proclaim the faith, to follow this Christ also personally as a monk. He authenticated his preaching by what we have heard in today’s Gospel: he cared for the sick and prisoners, the poor and the needy. In these days it need not be necessary to leave the monastery to do justice to the instructions of Jesus. All this can be accomplished within the framework of the community itself. St Benedict refers to this pericope when he speaks of the way in which we must behave towards the sick brothers, receive guests as Christ, especially pilgrims and the poor, keep clothes ready in store for the poor, and above all the love with which the porter must devote himself to the poor who knock at the door. Serving the poor, clothing those who lack clothes, visiting the sick – all these are counted among the good works of the Rule of St Benedict (RB 4.14-16).

What we need in our own day is pioneers, Benedictine monks and nuns with a vision. Let us take as our model a Dom Guéranger, a Père Muard, the brothers Wolter of Beuron or Bonifaz Wimmer or Andreas Amrhein, men who were inspired enthusiasts for Christ and who were determined to accomplish something of his message and his mission. To come down to a more recent period, we know men and women who have established new foundations in Africa, Asia, Australia, Oceania and Latin America during the last 50 years. They wanted to give the riches of monasticism to their respective local Churches, often with difficulty and in a small way. They were supported by monasteries and benefactors in Europe and the United States. The AIM was founded 50 years ago to co-ordinate this support. To all, especially in the Secretariat in Paris, we offer our sincere gratitude. We are a movement not powerful in the worldly sense but effective in the sense of the Gospel.

Each of us has his or her own course to follow. Nevertheless, this will succeed only if new pioneers arise, men and women gifted with courage and imagination. This is needed not only for new foundations, but also for the ever-necessary renewal of our communities. It is not only the Church which must constantly be reformed – ecclesia semper reformanda – but also our monasteries, so that life remains protected and continuously growing. The same is true of the message of Jesus, the fulfilment of human salvation. May his ‘goodness and humanity’ remain visible among us, especially in and through our monastic communities.