The Indo-Sri Lankan Benedictine Federation and its development are the result of the Congress of Bangkok in 1968, organized by the AIM to discuss monasticism in Asia.

The first meeting of monastic superiors in Asia was held at Bangkok in Thailand from 9th to 15th December, 1969, and constituted a real spiritual advance. For the first time the representatives of all the monastic families of East Asia met to discuss the present and the future of monasticism in the East. A number of members of the hierarchy were present, such as the Archbishop of Bangalore, Mgr Simon Lourdusamy, monks, missionaries, laypeople and consultants. The discussions concerned subjects related to monastic life, since everyone present was engaged in the post-conciliar renewal, and especially in inculturation in the light of Vatican II. 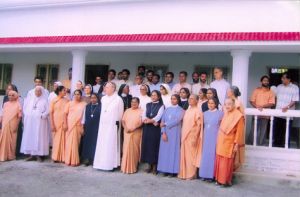 The first meeting of Indian Benedictines was held on 27-28th November, 1969, in the monastery of Asirvanam in Bangalore. Originally three communities were representated: Shantivanam, Asirvanam and Shanti Nilayam. Little by little other Benedictine communities in India were added. Its first name was ‘The Indian Monastic Union’ (IMU). Later it seemed more appropriate to the Indian context to use the Sanscrit term ‘samaj’, and it became ‘The Monastic Samaj’. At the time of the eighth meeting of the Administrative Council on 25th October, 1978, it was decided that in future the name would be ‘The Monastic Union of India’. This name was again changed at the ninth meeting in December 1979, which opted for ‘The Indian Benedictine Federation’. The spiritual guide was Dom Mayeul de Dreuille, monk of La Pierre-Qui-Vire. He realized the potential for growth for Benedictines in this part of the world.

a. To promote Benedictine life.

b. To develop fraternal relationships between the members of the ISBF.

c. To organize meetings to develop collaboration, decision-making and mutual help between the members.

d. To encourage contact with other monastic organizations to promote knowledge of one another and reflexion on our shared concerns.

f. To represent the interests of the members to the civil and religious authorities.

g. To provide occasions for sharing the needs, problems, suggestions, observations and various experiences of the members of the ISBF.

h. To encourage and promote different forms of monastic service in the local Church.

i. To promote ecumenism and interreligious dialogue. 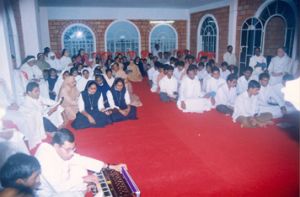 The ISBF seeks to put into practice the objectives mentioned above. One of the objectives of the Federation is mutual support and co-operation between its members. Regular meetings take place to discuss and exchange ideas on questions of common interest. The ISBF organizes a general meeting each year. This meeting takes place in different monasteries of the Federation, and is attended by almost all the superiors.

At least two papers are presented on a monastic theme. Group discussions and exchanges follow. This permits an enrichment of knowledge within a monastic framework. Each year also the ISBF organizes various courses and sessions for formators, novices, young monks and nuns. In addition to these courses there is a month’s course on monastic spirituality and theology at the monastic institute. This continues over a period of three years, for the solemnly professed and for students of theology. Students at this course are obliged to present a thesis on a monastic subject. At present we have ‘mobile’ courses, that is, the courses are given in different monasteries of the Federation. We firmly believe that we need to have a permanent monastic Institute to make these different courses a real success.

The ISBF is concerned with interreligious dialogue. The first initiatives were found to be fruitful, and led to the creation of BID (Benedictine Inter-religious Dialogue) in India and Sri Lanka. 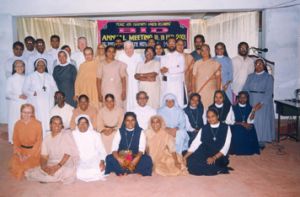 The AIM has been generous in its help to the ISBF by providing personnel and material for formation, as well as help in organizing seminars, courses and inter-religious meetings. The members of the ISBF work together to make the activities of the Federation more fruitful by providing personnel to lead retreats and different courses. An editorial team has been set up to disseminate works on monastic themes. Several books have already been published. The Rule of St Benedict has been translated and published in several languages.

The ISBF rejoices at the growth and expansion of Benedictine monasticism in India and Sri Lanka. Its members are very grateful to the Abbot Primate, Dom Notker Wolf, and to Dom Martin Neyt, President of the AIM, for their tireless help to the ISBF and to all the monasteries in India. Since the AIM is this year celebrating its jubilee, we congratulate Dom Martin and all the members of the AIM team for their wonderful service to the world and we thank God for the gift of the AIM.